Eagles vs. Cowboys Part Two: By the Numbers

Paul Domowitch takes an inside look at the Eagles’ shift to more 12- and 13-personnel and how it helped spearhead the team into the playoffs. 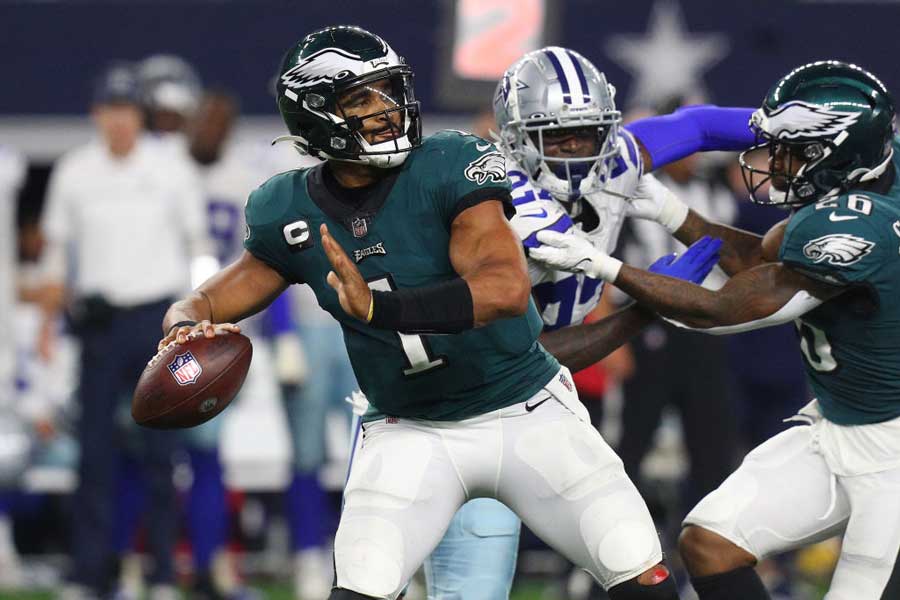 Jalen Hurts throws a second half pass while playing the Dallas Cowboys at AT&T Stadium on September 27, 2021. / Photograph by Richard Rodriguez / Stringer via Getty Images

Once again Sunday, Nick Sirianni used a healthy dose of multiple-tight end sets. Thirty-one of the Eagles’ 61 offensive plays in their closer-than-it-should’ve-been win over Washington were run with either 12-personnel (1RB, 2TE, 2WR) or 13-personnel (1RB, 3TE, 1WR).

Jalen Hurts completed 17 of 26 passes for 214 yards Sunday against Washington. He was 6-for-6 for 98 yards with 13P. Tight end Dallas Goedert had two catches for 32 yards out of three-TE sets. DeVonta Smith, who is usually the lone wide receiver in 13P, had two of his three catches for 42 yards in it. Running back Boston Scott had the other two catches.

In his last three starts, Hurts has completed 11 of 13 passes for 211 yards with 13P. Gardner Minshew was 4-for-5 for 31 yards with 13P when he started for the injured Hurts against the Jets.

The ground game: then and now

Paul Domowitch has covered pro football for five decades and has been a Hall of Fame selector since 2001. You can reach Paul at [email protected] or follow him on Twitter at @pdomo.