Even “Football Guys” Need a Break

Nick Sirianni had to give his players time off, but he always gave his coaches a break during the Eagles bye week. 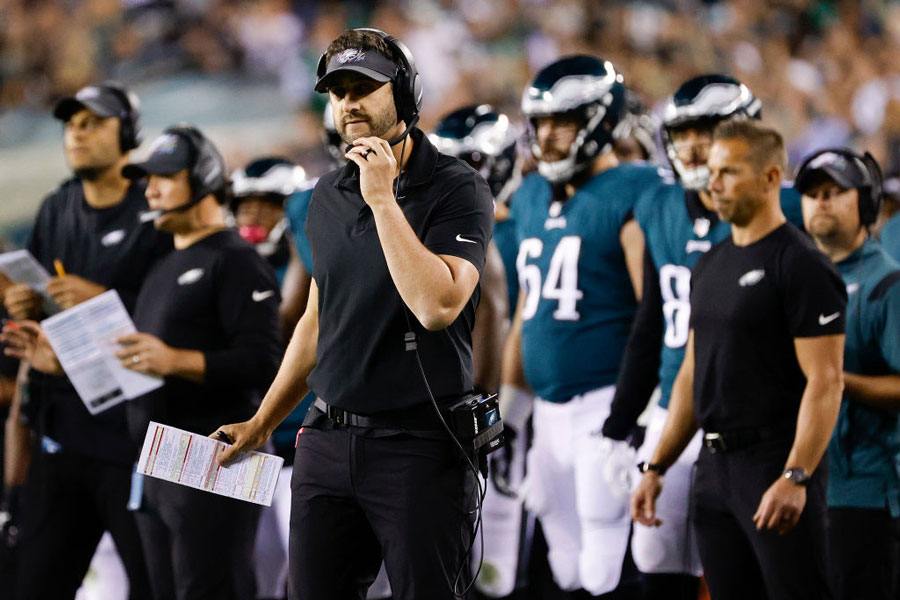 Nick Sirianni looks on against the Tampa Bay Buccaneers at Lincoln Financial Field on October 14, 2021. / Photograph by Tim Nwachukwu / Staff via Getty Images

That was Nick Sirianni’s message as the 40-year-old mentor attempted to navigate his first bye week as an NFL head coach.

The players, of course, collectively bargained time off during the lone respite on the league’s schedule, but Sirianni’s coaches are also being given some time off by the boss, who seems intent on making sure everyone is ready to go for the final four games as the 6-7 Eagles try to finish off an unlikely playoff push.

While spending time with family and friends is especially important at this time of year for anyone’s mental health, Sirianni acknowledged football might be on the back burner for a bit, but it never leaves the stove for people like him.

“We’re football guys,” Sirianni said earlier in the week when talking about himself and his staff. “We’re going to think about football. We’re going to watch football when we’re away.”

Sirianni noted that he was planning on watching his son’s flag football game on Wednesday and taking in what turned out to be a wild affair between the Vikings and Steelers on Thursday night. He also has his eyes set on Army-Navy this Saturday.

“That’s who I am and that’s what I like to do,” the coach said when talking about his love of the game. “And so, we’ll be away and recharging, but I know our guys – I know we’ll be on the group text with the coaches or the players and talking about plays that are happening in the games that we’re watching that week.”

There is a sentiment around the NFL that innovation trickles up in the football industry with most of the new ideas being tested out in college or even high school before the professionals deem it ready. Sirianni joked he wasn’t even ruling out the kids when it comes to learning something new.

“I don’t know how many coaching points I’ll have from my six-year-old’s flag football game, but if there is something to learn, we’ll learn from it,” he smiled.

The grind is real in the NFL so much so that the Eagles’ social media staff even took a few days, which seemed to upset way too many fans who probably need their own mental-health breaks away from Philadelphia’s passion.

Participating in the NFL’s final bye week with the Eagles are three AFC teams: New England, Indianapolis, and Miami.

While it was tough getting through 13 games without the break, it now seems like a panacea to help with a number of typical late-season issues like the so-called rookie wall, plus the normal bumps and bruises professional football creates.

Playing meaningful football during the holiday season with a rookie head coach and a first-time starter at quarterback in what Jeffrey Lurie coined a transitional year for the Eagles has to be deemed a success.

Now the Eagles want more with four NFC East foes left, back-to-back home games against the Washington Football Team and the New York Giants before a trip down to the Beltway for another game against WFT and a Week 18 encounter against division leader Dallas at Lincoln Financial Field.

“We have a formula of how we want to do this, and for the teams that do that, that puts you on schedule of being the best team that you can be that year with the guys and the coaches and the players that you have on that team,” Sirianni said. “I like the progression we’re on, because I do believe that that’s what we’ve done each day, is just getting a little bit better.”

“That’s been the message, and we got some great leaders on this team that enforce that message.”