Eagles Week Two Autopsy: A Look at the Game-Defining Plays in the 17-11 Loss to the 49ers

Failed opportunities hampered the Eagles in a 17-11 loss to San Francisco. Here’s a review of the game-defining moments. 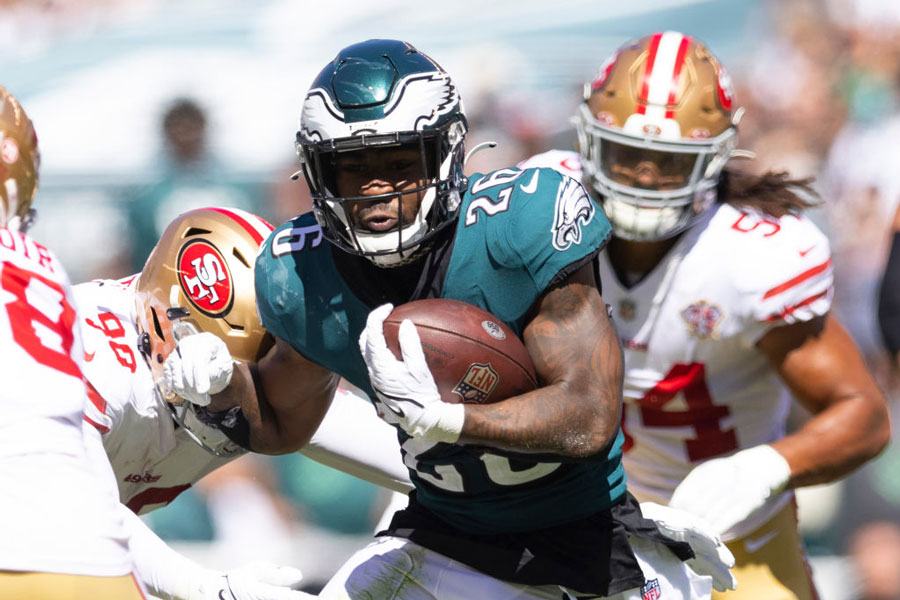 After an emphatic season-opening win in Atlanta, the Eagles had an opportunity to announce their candidacy for a playoff position in their home opener against San Francisco. A win with a rookie head coach and a young quarterback making just his sixth professional start would have proved that Philadelphia was ahead of schedule in its race back to relevancy, one where 1:00 ET starts are a necessary evil, not the default setting.

The Eagles showed they did belong on the field with the 49ers and outplayed their more well-regarded foes for large parts of the afternoon. The difference was failing to finish, according to quarterback Jalen Hurts.

“The biggest thing is just finish, finish, finish,” Hurts said after a disappointing 17-11 setback. “We got two games under our belt now, and on the tape, we see what we finish and what we didn’t finish. This game, we didn’t finish more than we did. We have to capitalize on those opportunities moving forward and learn from this feeling.”

Nick Sirianni’s game-planning, largely lauded against Atlanta, reeked of an unneeded market correction, perhaps an overreaction to the adjustments the rookie head coach assumed were coming.

Hurts was last in the NFL in air yards per pass in the Week 1 win, according to NextGenStats, with 3.7 yards per attempt — which turned his red-flag 52 percent accuracy rate in 2020 into one that was over 77 percent. Seven days later, Hurts led the NFL with 14.6 air yards per attempt, a wide variance that fostered a 12-of-23 day and a trip back toward 52 percent. The culprit was a lack of intermediate throws, which has been the lone consistent part of Sirianni’s plans over two weeks.

“In our first two games, that’s where we wanted to attack on the defensive side,” Sirianni claimed, “outside the numbers there and underneath a little bit. And so that’s just a product of who we’re playing and what routes we have in for that week.”

Here’s our weekly look at the five key plays that defined the game.

1. Fourth-and-goal from the 49ers’ three-yard line with 4:28 left in the second quarter
Call it the “Philly Unspecial,” where Sirianni tried to pander to the fans with nostalgia, hoping Hurts, DeVonta Smith and Greg Ward would replicate what Nick Foles, Corey Clement and Trey Burton did in Super Bowl LII. Instead, it served as the clear demarcation line for the living, breathing manifestation of momentum. The Eagles were dominating prior to this play, albeit with a failure to cash in on scoring opportunities. After, it was all 49ers.

But the failure was simply the denouement of a dubious series of play calls after a 91-yard Hurts-to-Quez Watkins reception.

“I don’t think I called good plays in that area,” said Sirianni. “There are going to be times where you’re going to look at it and be like, ‘I want those calls back.’ When they work, it was a good play. They didn’t. So it was my fault. I didn’t call good enough plays right there. I didn’t put the players in good enough positions.”

2. Jalen Reagor’s would-have-been 36-yard touchdown with four seconds left in the first quarter
Hurts dropped a beautiful deep throw in the bucket to Reagor down the right sideline, and the 67,000-plus at Lincoln Financial Field exploded, believing the Eagles were about to go up 10-0 on the Niners. Problem was, Reagor stepped out of bounds twice before getting back in bounds and corralling the catch, an illegal-touching penalty that the field judge somehow missed but was clear on video replay.

Bumping downfield is part of the gig for NFL WRs, and Reagor has to show better awareness in his route-running — something Sirianni admitted while others were complaining that the 49ers should have been flagged.

“I thought he made a great play. Obviously, his foot was just out, and the referees did a good job of officiating that. I told the one referee, ‘You have probably never heard a coach tell you good job when a 50-yard [actually 36-yard] touchdown comes off,’ but they officiated well and did their job.”

3. Derek Barnett’s unnecessary-roughness penalty with 5:45 left in the game
Barnett’s was the first of consecutive personal fouls that enabled the 49ers to go up 17-3 and essentially seal the game. The second was a bang-bang dropping of the helmet by K’Von Wallace on Trey Sermon that knocked the Niners’ rookie running back out of the game.

Barnett’s miscue was the far more egregious from a mental standpoint, a cheap shot after the whistle had blown on a San Francisco fumble that trickled out of bounds. An eight-yard loss that would have likely crippled the drive instead turned into a seven-yard gain, and Sirianni was left to deflect for a player with a history of personal-foul penalties.

4. Deebo Samuel’s 40-yard X play with 17 seconds left in the second quarter  The Eagles defense nearly went six quarters without giving up an explosive play in the passing game before the dynamic Niners receivers got loose over the middle. Samuel’s was the first chunk of 20 or more yards against Jonathan Gannon’s zone-heavy schemes this season, as he took a short Jimmy Garoppolo pass across the field and rumbled for 40 yards down to the Philadelphia 11-yard line.

On the next play, Garoppolo hit Jauan Jennings for an 11-yard TD to cap a massive 12-play, 97-yard drive coming off the fourth-and-goal failure by the Eagles. The score let the 49ers take a 7-3 lead into the locker room, an advantage they never relinquished.

“I know they hit that big one to Deebo Samuel. But it’s hard for an offense to go that long and to be that efficient for that many plays in a row,” Sirianni noted. “I’m looking at the positive of that. Of course, yeah, you want to stop them on those and get off the field on some of those third downs, but big plays are a big part of this thing. Again, two big stats we look at are the turnover battle and the explosive-play battle. So you know you’re not giving up explosive plays when there’s a long drive like that.”

5. Jake Elliott’s blocked 47-yard field-goal attempt with 14:07 left in the second quarter
It was a trickle-down effect of Reagor’s earlier mistake as 49ers defensive tackle Javon Kinlaw stopped Elliott’s attempt to give Philadelphia a 6-0 edge.

“I don’t think there was penetration,” said Sirianni. “It just looked like he got his hand on it, and I don’t know if it was a low kick … I feel like if you get the ball a little closer for him on offense, then maybe he doesn’t have to line-drive it like that.”