The Complete Broad Street Run Guide for Runners and Spectators

Your one-click guide to having an excellent Broad Street Run experience this weekend. 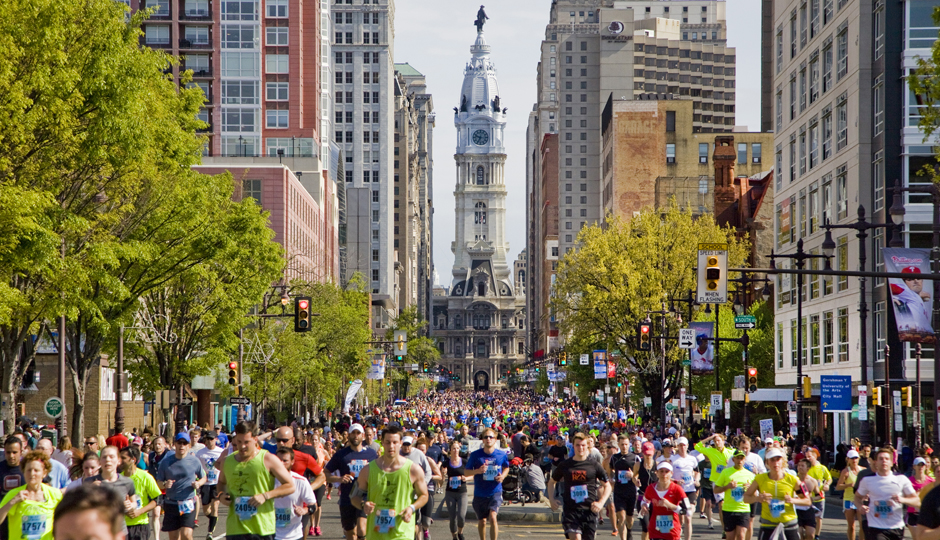 Get your dazzling and witty signs ready, folks, because the big day is rapidly approaching. Six days from now, on Sunday, May 7th, runners and spectators will be flooding the streets and sidewalks of Broad Street for the 38th annual Broad Street Run — a huge event for local runners and local fans, alike.

Whether you’ve spent the past few months training for the big day or plan on spending your Sunday watching 40,000 people bust their humps down Broad Street, here is your guide to getting through the whole damn day from start to finish, and everything in between. Below you’ll find the hot spots to cheer, important information for runners and spectators, plus where to eat, drink and party after it’s all over. » When is the Broad Street Run and what time does it start?
The 38th annual Broad Street Run begins Sunday, May 7th at 8 a.m. Runners should have their gear checked and be in their corrals by 7:40 a.m.

» How can I get to the starting line?
There is extremely limited parking near the start area, so the organizers of the race suggest taking advantage of the free parking for runners at the Stadium Complex on Broad and Pattison, near the finish area, then taking the Broad Street Line to the Broad and Olney Transportation Center. From the AT&T Station at the Stadium Complex, the subway ride takes approximately 35 minutes, but runners beware: there are sometimes delays (particularly in the form of overcrowded trains). So we suggest allowing yourself extra, extra time to get to the starting area without stressing.

If you’re worried about finding a parking spot by the finish line, know that Broad Street Run director Jim Marino says there has never been an issue with available parking spots at the Sports Complex in the past. There is no check-in required to park in the Sports Complex, so feel free to pull up to any available spot and enjoy the complimentary parking. But do note: there is no tail-gating permitted in the Phillies parking lot.

After the race, there will be shuttles available to take runners from the Philadelphia Navy Yard to the Stadium Complex parking area. But keep in mind that there’s a Phillies game at 11:30 a.m., so runners parked in the Phillies parking lots must leave by 11:30 a.m.

» What can and can’t I bring with me to the race?
For runners: There are no backpacks allowed at the starting line. You’ll get a clear plastic bag when you pick up your race packet, which you can bring to the race with you; it will be transported by bus to the finish line. Race organizers suggest you include a form of identification (like name, address and phone number) in the bag, in case the bag needs to be shipped after the race. All gear must be checked by 7:45 a.m. and can be picked up at the south end of the Marine Parade Grounds at the Navy Yard after the race.

» When and where is bib pickup?
Runners should head to the Health and Wellness Expo at the Pennsylvania Convention Center (1101 Arch Street, Center City) to pick up their Blue Cross Broad Street Run race packet, which includes their race bib with ChronoTrack timing device, and a T-shirt. The expo will run on Friday, May 5th from 11 a.m. and 7 p.m., and Saturday, May 6th from 9 a.m. and 6 p.m. There will also be tons of exhibitors at the expo so be sure to leave some time to take stroll around the tables. You can check out the full lineup of exhibitors here.

If you can’t make it to the expo, don’t sweat it: You can have someone else pick up your race packet. They will just need to show their I.D. and have a copy of you online race confirmation.

» I’m going to watch the race. Where should I stand and cheer?
As a spectator, you’ve got the all-important job of motivating runners when they feel like falling down — a job that should not be taken lightly! The race takes place solely on one street, so you can pretty much stand anywhere along Broad Street between the start and the finish and cheer on the runners flying by, but we’ve picked out a few notable spots along the 10-mile course where you’re sure to have a blast while you get your scream on. (Bonus points if you show up holding a funny sign.)

For the bands: If your Broad Street Run isn’t complete without a little trumpet and snare-drum action, make sure to stick around City Hall or the Union League building at Broad and Sansom. According to Marino, these are the places to stand if you want a band for background music.

For the party: Lululemon and the November Project are teaming up again this year to deliver a full-blown cheer fiesta at Broad and Jackson. And trust us, they take their cheering duties very seriously. This year, they’ve decided to make their cheer-station a white out, so just show up in your best white gear. Happy color-coordinated cheering!

For the energy: Head to Broad and Pine or Broad and Washington Avenue to hop on the hype train. Marino says the crowds at these locations often bring the most passionate (and audible) spectators.

For the college feel: With Temple’s cheerleaders, the band and Hooter T. Owl (Temple’s mascot) out to cheer on runners as they barrel past Broad and Polett, you’ll feel like you’re right back in college at this cheer zone — at least for a few hours.

First things first: Runners’ first stop should be Philadelphia Runner’s Broad Street Run Tailgate party at the boathouse in FDR Park. You’ll find free Shake Shack hot dogs and custard, Yards beer and — icing on the calorie-dense cake — free massages from Philamassages. Just stop by Philadelphia Runner this coming week to snag a ticket to guarantee you get some grub.

While runners are busy chowing down on their free (well-deserved) Shake Shack and Yards, spectators can find good eats near these mile markers on the course: