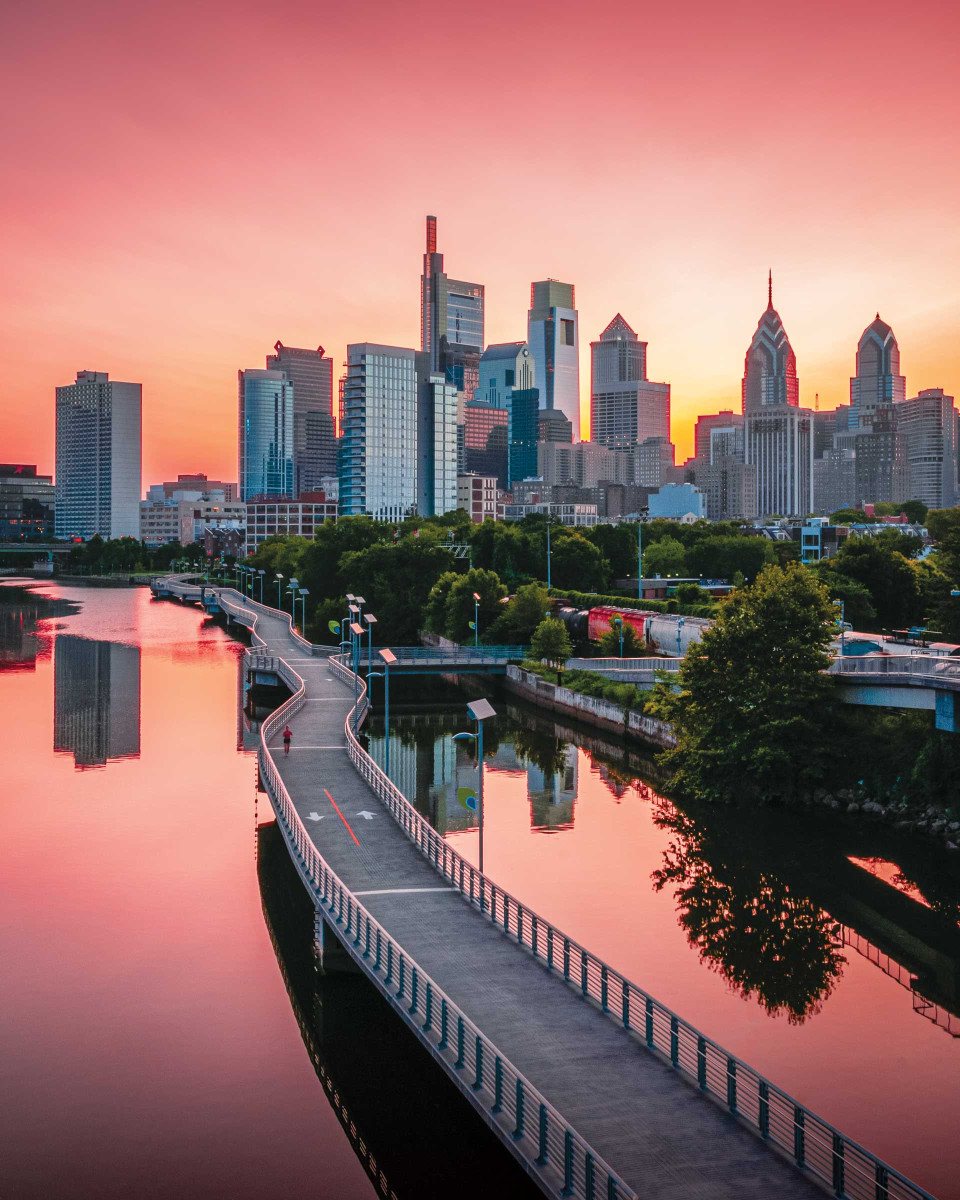 The early riser gets the views. The sun rises on early-morning Philadelphia.  / Photograph via iStock/Getty Images Plus/Getty Images

“You see the city in a different way before everybody gets up,” says Erika Tonelli Bonnett, who took over as owner of Center City Pretzel in 2021 following her father Tony’s death. Her workday begins at 3:30 a.m., well before the gate swings up at six to welcome the usual crowd of sanitation workers, Verizon linemen and security guards. “There’s still a glow over it, and you get to see it in a different light other than the hustle and the bustle and what you see on the news and the bad things and everything. There’s still just this kind of … mist over it. You know you’re alone, but you’re not alone. People are waking up, and you’re a part of it. You’re the first ones there.”

Here’s how to make the most of the Philadelphia region while everyone else is still snoozing. 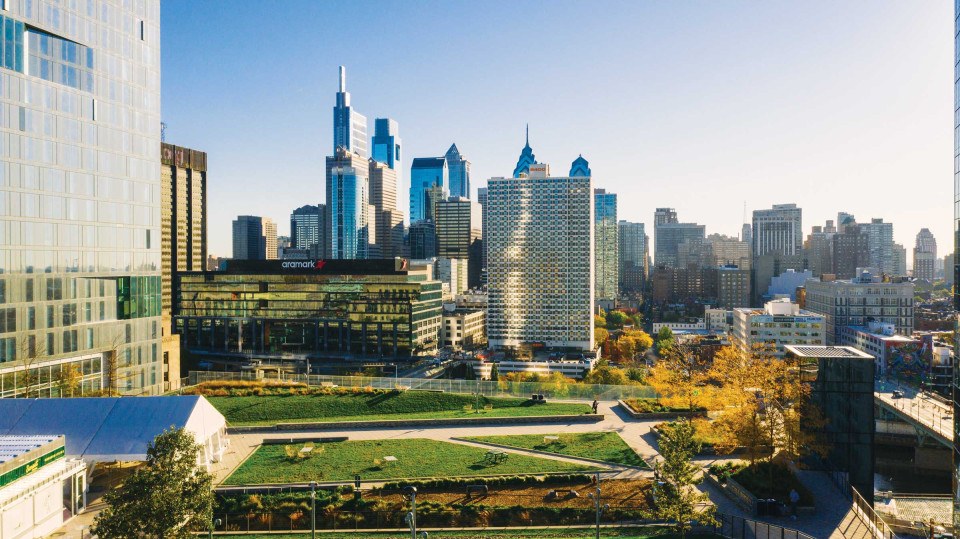 We don’t have many mountains to climb up to catch the day’s first light. Try these prime sunrise spots instead.

Lardner’s Point Park, Northeast Philly
The parks in the Northeast never get enough shine, even though they’re some of this city’s best ways to experience the Delaware. Head out onto the pier to watch the sun rise behind the Tacony Palmyra Bridge — and to wonder why you don’t spend more time up this way.

Delaware Canal State Park, Bucks County
This 60-mile stretch of trail from Bristol to Easton is especially gorgeous in the fall, when the sun reflects off the narrowing Delaware and catches the turning leaves. Pick a segment to explore; we’re partial to the towpath between Washington Crossing and New Hope.

RCA Pier, Camden
We know, we know: How can you see the sunrise when you’re facing west? But after you’ve watched the light creep up Cherry Street Pier and slowly illuminate the skyline, you’ll know that the walk across the bridge is worth it. 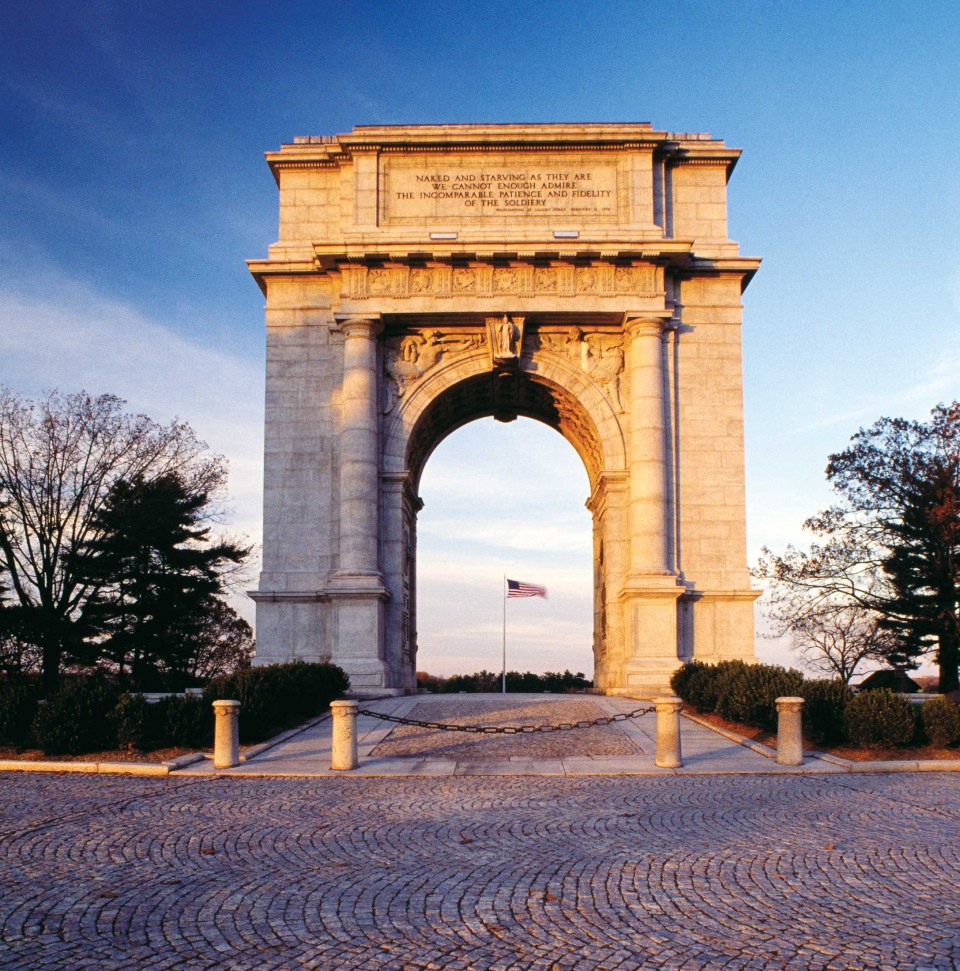 National Memorial Arch, King of Prussia
Watching the fog roll across Valley Forge as the sun rises is an especially poignant way to start your day. Designed by Paul Philippe Cret—who’s also responsible for the Ben Franklin Bridge—the National Memorial Arch has an opening that faces east-west, so as you trudge up the hill, the sun peeks right through.

Cira Green, West Philly
A parking garage may not come immediately to mind when you think, “I’m gonna commune the hell out of nature this morning.” Cira Green changes that. The private-yet-sorta-public park sits on the 12th floor of that parking garage and offers skyline views that didn’t exist before its opening in 2015. 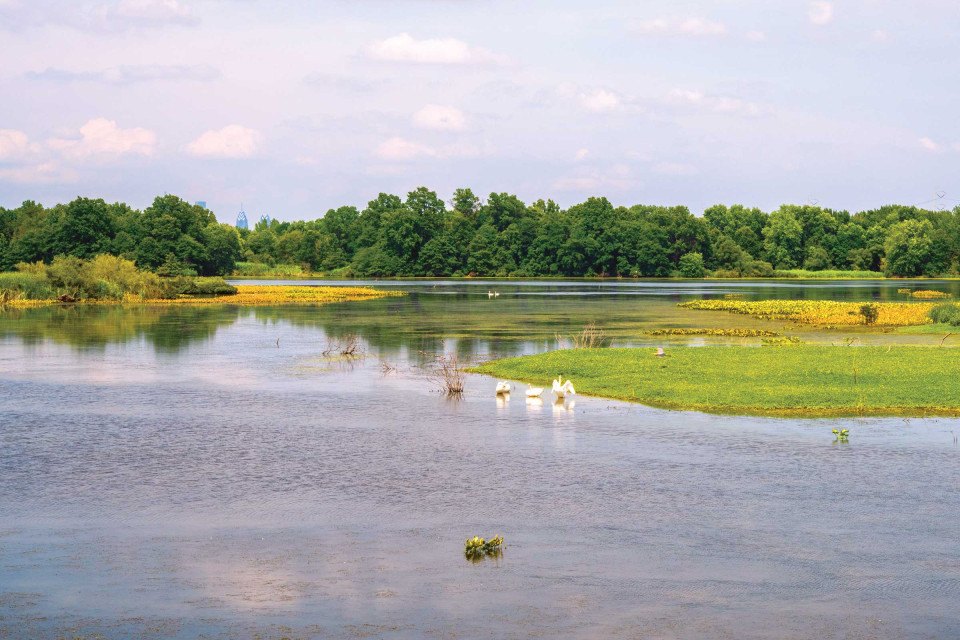 John Heinz National Wildlife Refuge, Southwest Philly
You’ve seen it from I-95, with the egrets swooping and the lily pads bobbing, and you told yourself you’d get there someday. Then the weeks turned into months turned into years, and you kept passing by. But today was different. You tossed your dusty binoculars in the trunk, set your alarm for some godforsaken hour, and pulled up to the entrance just as the gates opened at six. You laced up your running shoes and hit the Wetland Loop Trail — just under four miles, enough to justify­ bringing your sneakers but not so much that you’ll need to change your clothes. You thought about packing your fishing rod but knew today wasn’t the day your luck would change. Instead, you set up on an observation deck with those binoculars, facing the rising­ sun. First it’s a few ducks, then a siege of herons.­ A peregrine falcon skims the top of the marsh, on the hunt. As you leave, you stop at the Carter­ Watermelon stand at the corner of 84th and Lindbergh. You crack yours open with a pocketknife and wonder, staring at the honeyed­ yellow flesh, Why have I never done this before? Today was a good day, and it’s not yet 10 a.m.

Run It: 5 Early Morning Running Clubs to Check Out 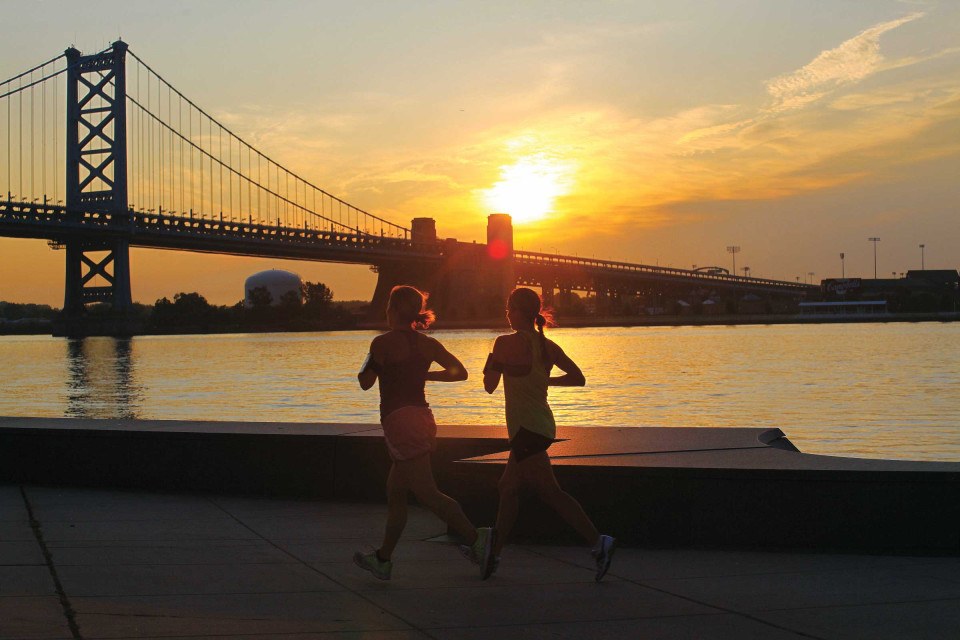 The best prod to exercising early is knowing that other folks are dragging their asses out of bed, too. Most running clubs are free and can accommodate all paces.

If you live in North Philly
Try: Black Men Run Philadelphia.
The Philadelphia chapter of a national group founded to encourage Black men to be active.
Meetups: Saturdays at 7:30 a.m., 33rd Street and West Diamond Avenue.

If you live in South Philly
Try: South Philly Striders.
This group’s meetup spot means it pulls runners from across Center City, too. If sunrise isn’t your thing, try the group’s Ben Franklin Bridge runs on Wednesday evenings.
Meetups: Tuesdays and Thursdays at 6:15 a.m., Front and South streets.

If you live in Delco
Try: Delco Road Runners.
How dare the group call this bi-weekly five-miler a “fun run”? There’s nothing fun about getting up this early.
Meetups: Tuesdays and Thursdays at 5 freaking a.m., Springfield Library, Springfield.

If you live anywhere in the city
Try: Citywide Athletics.
From Clark Park to Lemon Hill to Penn’s Landing, this crew switches routes every week. Check out their Instagram stories (@citywideathletics) to find the morning’s starting point.
Meetups: Thursdays at 6:45 a.m., varies.

If you live near Lancaster Avenue
Try: Bryn Mawr Running Club.
If you’ve got 10 to 15 miles in your legs, this one’s for you. Here’s to the long-haulers.
Meetups: Saturdays at 6:30 a.m., location varies. 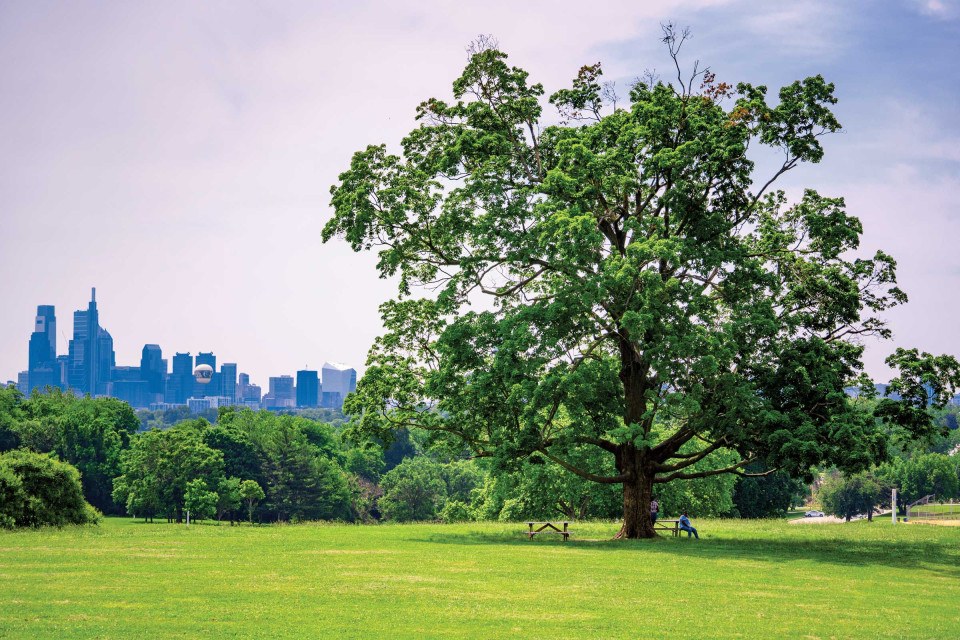 Most folks dread setting an alarm, especially for, ugh, exercise o’clock. These hikes make prying yourself out of bed worth the effort.

Belmont Plateau, West Philly
The Plateau isn’t, well, the most original item you’ll find in these pages. But how often have you been there by yourself? Start the day taking in the best view of the city, then get your legs pumping on the Trolley Trail. Check the Fairmount Park website for occasional sunrise hikes led by veteran hiker and photographer Brad Maule.

Pennypack Preserve, Huntingdon Valley
The trails here usually open at a roll-out-of-bed-whenever 8 a.m., but occasionally, you can meet at the Pennypack Trust Headquarters for a guided sunrise hike with a park staffer. Depending on the time of year, get ready to be there at 5:30 a.m.—and wear a headlamp.

Supawna Meadows National Wildlife Refuge, Pennsville
In Jersey just south of the Delaware Memorial Bridge, this marshy 2,800-acre refuge sticks a thumb out into the river, making it an ideal spot to take in the morning. Unlike at many parks, gates open a half-hour before sunrise, so visitors can watch the day begin across the brackish tidal marsh. Take the one-mile Forest Habitat Trail to catch great blue herons, wood ducks and Southern leopard frogs.

Take a Walk on the Wild Side 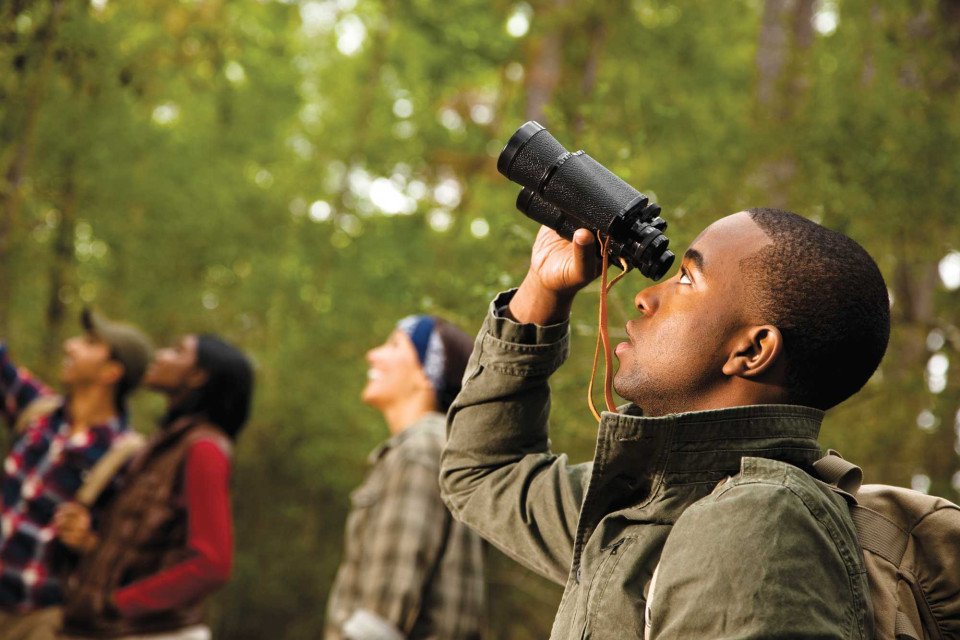 The pandemic has folks flocking to bird-watching. / Photograph via Getty Images

Sunrise is often the best time to catch a glimpse of our furry and feathered friends.

Birds
Ever since the pandemic began, birding has been having a capital-M Moment. It’s outside! It’s safe! It takes your mind off the world for a millisecond! Here in Philly, that’s spawned a brood of birding groups, many of which take to the woods and marshes and hills first thing in the morning. Try out In Color Birding Club — a group of BIPOC birders that’s inspiring communities of color to join their flock — or the Delaware Valley Ornithological Club, one of the oldest such clubs in the United States.

Beavers
If you’ve spent any time recently in Fishtown’s Penn Treaty Park or Pennsport’s Washington Avenue Green, you may have noticed fewer trees than in the past. If you look closely, you can see why: Thanks to the Delaware’s rebounding health, it’s once again becoming a beaver habitat. If you’re out early enough in the morning — beavers employ their unique brand of clear-cutting mostly at night — you might just spot one.

Fish
Pack up early (or camp the night before) and take a boat out to the middle of Lake Nockamixon in Quakertown’s Nockamixon State Park, where you’ll spot largemouth and smallmouth bass and even the occasional muskie and walleye. The boat launch is open 24 hours a day, so how early is too early is up to you.

Tigers (yes!)
If you’ve ever gone to a zoo and thought, “I wonder what goes on here when there aren’t as many people?,” this one’s for you. A few times a month, the Philadelphia Zoo opens its gates to members an hour before the public can get its paws on the railings. The big cats look even scarier when you realize you’re their only possible target.

5 Spots to Grab an Extra-Early Breakfast in Philly 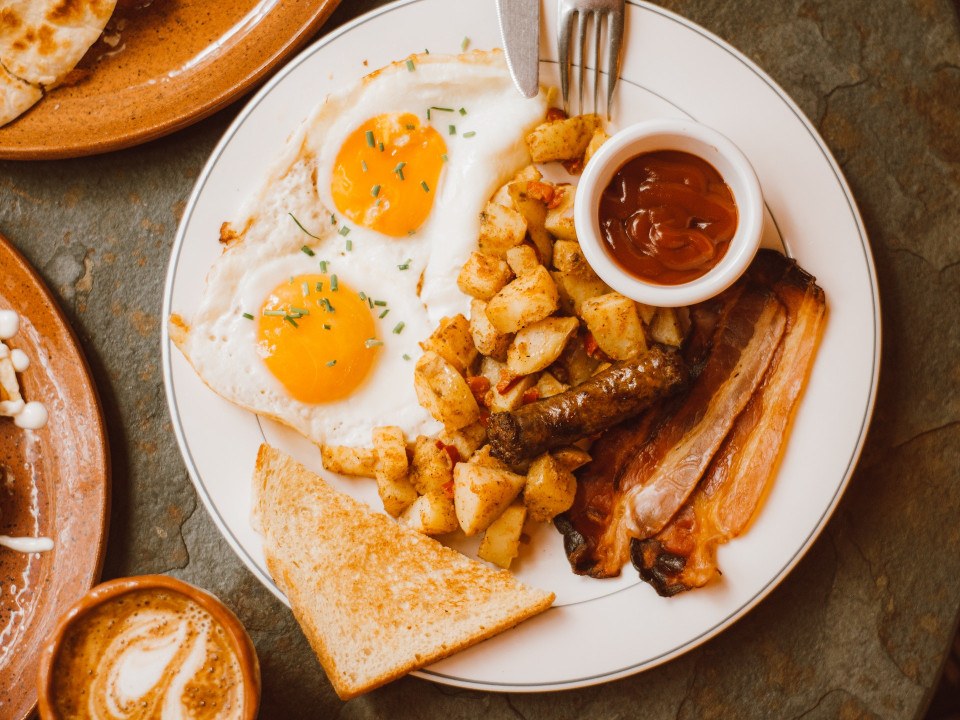 For breakfast spots that open real early, you gotta go where the workday starts while it’s still dark. Here are our top five.

Published as “Dawn Patrol” in the July 2022 issue of Philadelphia magazine.