On the Market: Eclectic Modern Manor in Flourtown

Almost by chance, a client with a particular vision and an architect with a novel approach to modernism met each other, and this one-of-a-kind house is the product of that meeting. 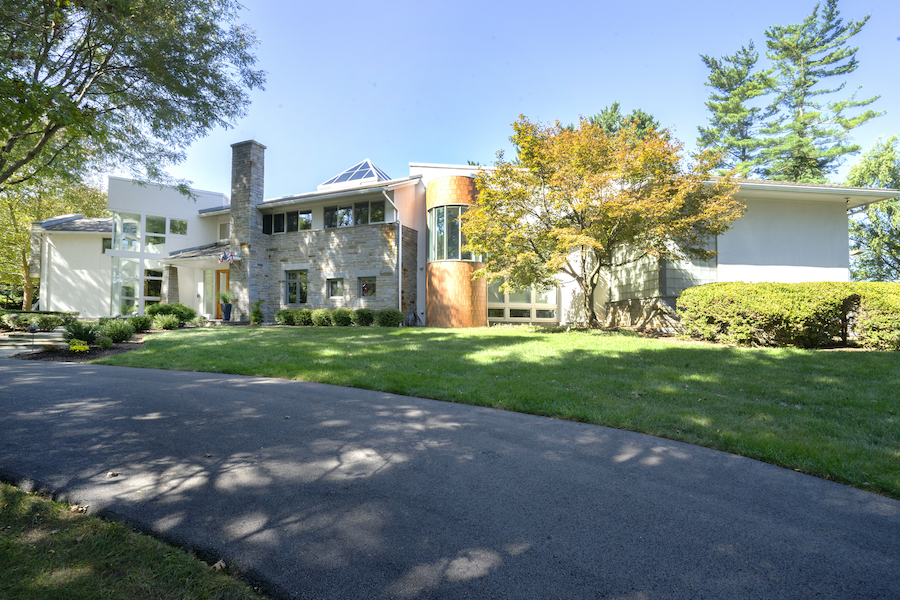 Is this a modern house? Absolutely. Yet it’s also traditional. But the best term to describe it is “a true original.” Come see why at 1 Wingate Ct., Flourtown, Pa. 19031 | Images: The Sivel Group, BHHS Fox & Roach Realtors; images with asterisks: Joel Levinson

I know that many people buy and build houses so they can show off their works of art.

Rarer, however, are those who build works of art to live in.

This eclectic Flourtown modern manor house for sale is one of those places. And it was also built to showcase the art the owners were buying when they built it.

“My husband had started an art collection,” says Janet Kimball, who owns this unique house with her husband Ron. He started the collection early on in his career as a physician: “When he was an intern, he had a choice: He was in an apartment by himself.” And, she says, he asked himself, “‘Do I buy a couch, or do I buy the art?’ So he bought the art.” 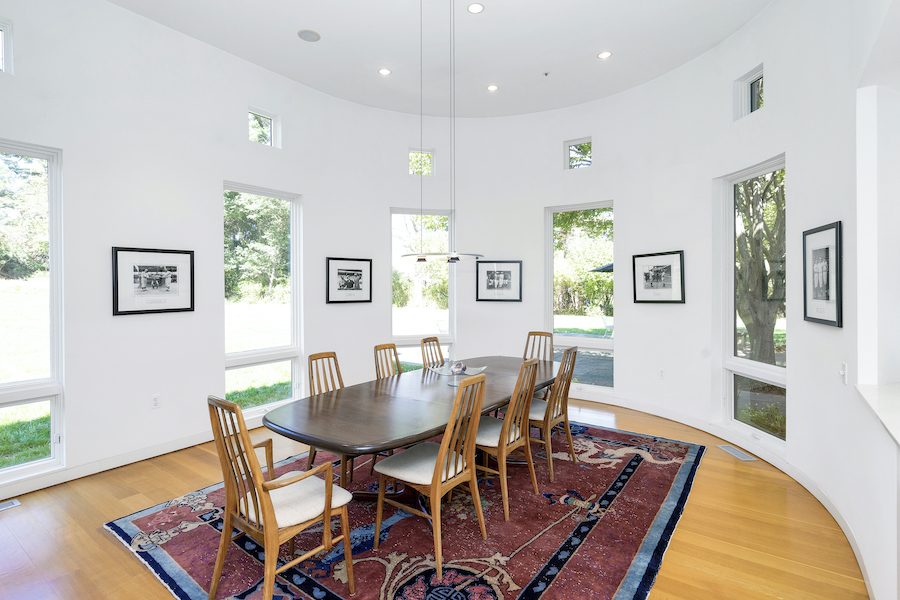 So, having amassed a sizable art collection since then, one of the things Ron and Janet knew they wanted in the house they planned to build in Flourtown was ample space to display artworks. And after visiting the Main Line home of their friends Bradley and Marjorie Lee (of Lee Tire fame), they knew who they wanted to provide it for them: architect Joel Levinson.

“Joel had designed their home,” she explains. “One night, they invited us over to go out to dinner. And we never did go to dinner. We just talked, going from room to room, talking about what went into everything and where they got this idea and that idea.

“And then we said, ‘Who was y0ur architect?’ And they told us it was Joel.” 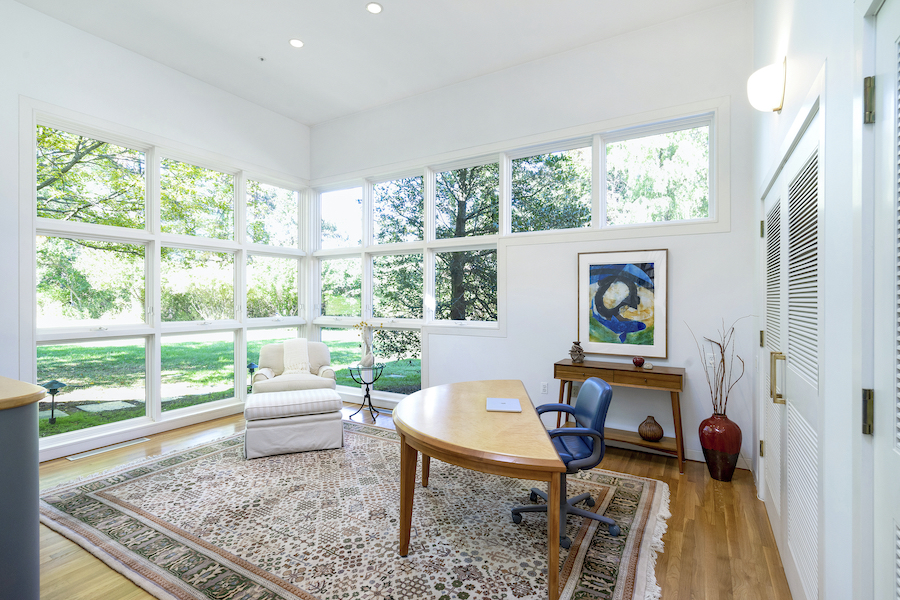 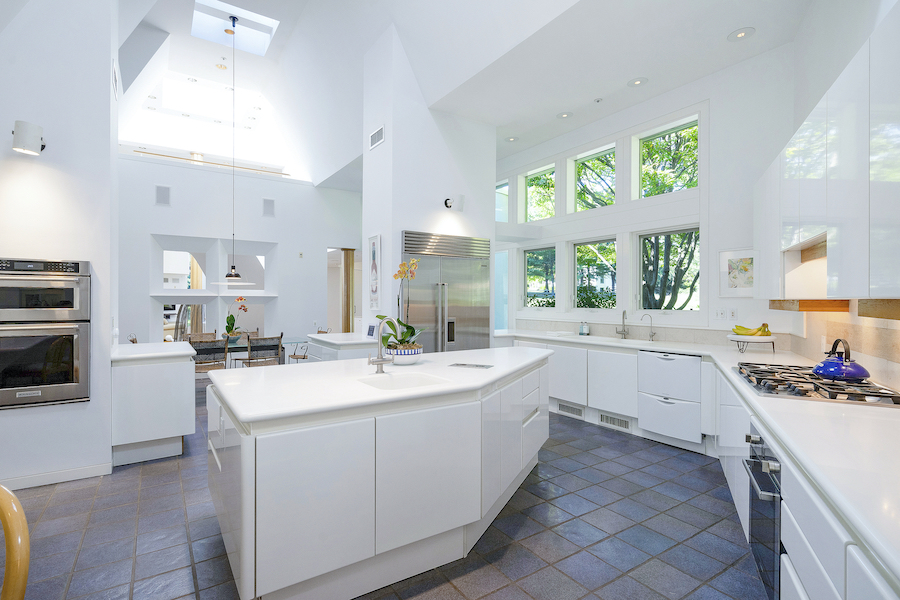 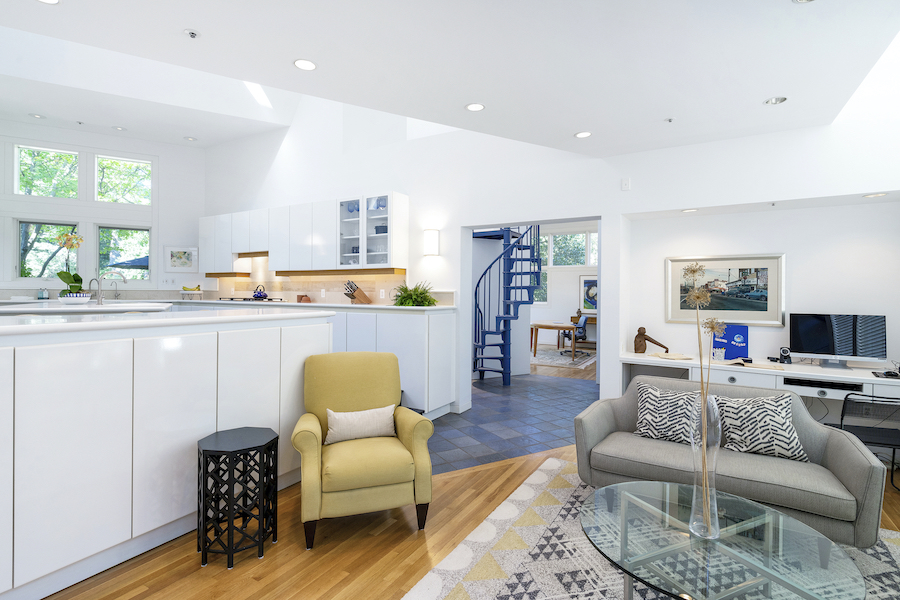 Sitting room/playroom next to kitchen

And they wanted something that wouldn’t stick out too much in a neighborhood of mostly traditional houses. Levinson could handle that too: “My design philosophy is eclectic,” says Levinson. “I was trained at Penn as a modern architect, but I have always appreciated traditional architecture and photographed it on my travels.”

And so it came to pass that this pastiche of the medieval, the English picturesque, and modern influences ranging from Art Deco to midcentury to high modernist arose on a 1.69-acre lot in Flourtown. 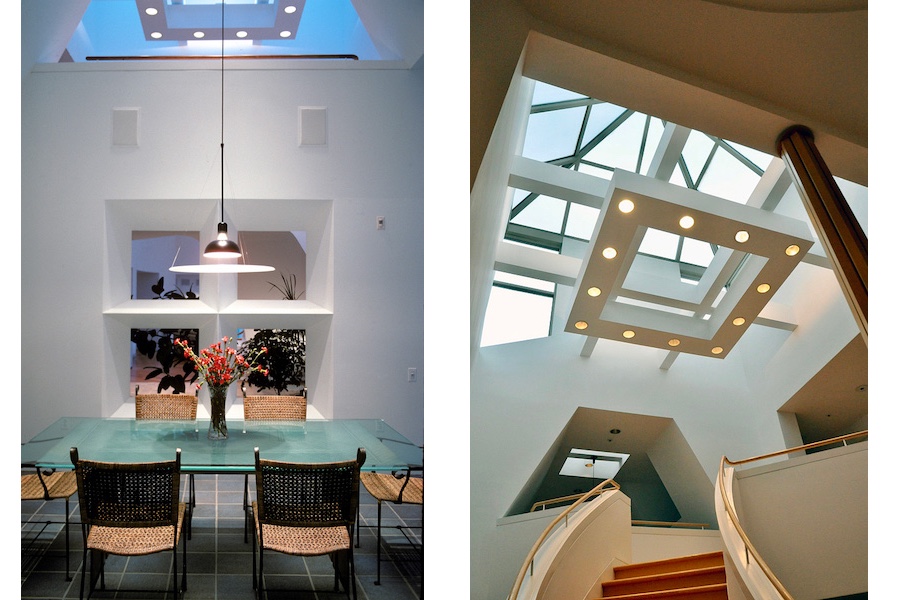 Things aren’t all right here: at left, sharp angles accentuate the breakfast-room skylight, while the skylight over the main staircase is pyramidal; the breakfast room skylight appears through the arch in the photo at right*

This Flourtown modern manor house for sale checks off every item on that list the Kimballs gave their architect. Its sensuousness comes not only from its many curves but also from its many slopes and angles, which express one of his chief architectural interests: “diagonality.” The not-quite-right angle, he maintains, has been the source of delight and fascination stretching back centuries.

And certainly those angles delight and fascinate in this house. Look at how they frame the pyramidal skylight over the main staircase and add drama to the breakfast room.

And note the light that pours through both. Ample windows and many skylights flood the house with natural light as Ron wanted, and the dominant white color palette only intensifies the sense of airiness. 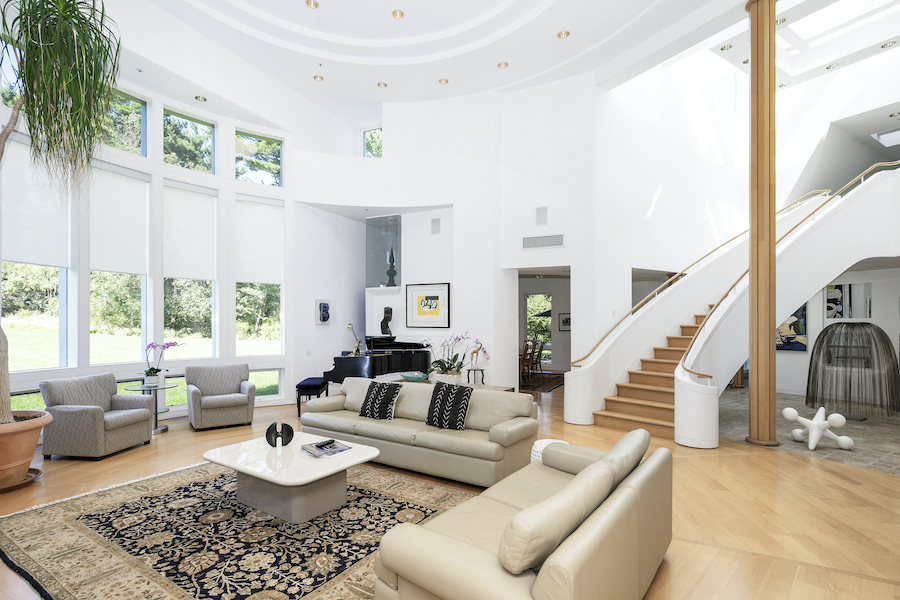 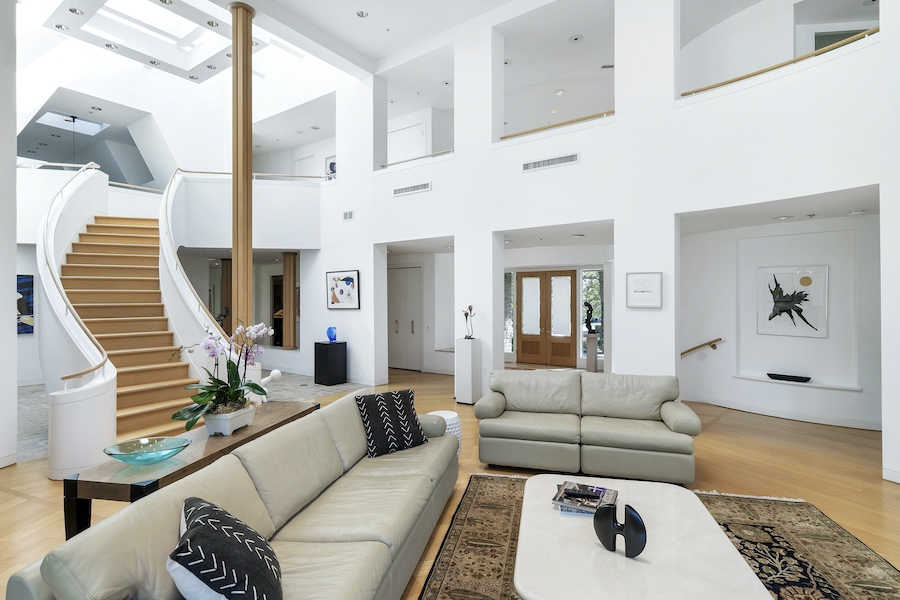 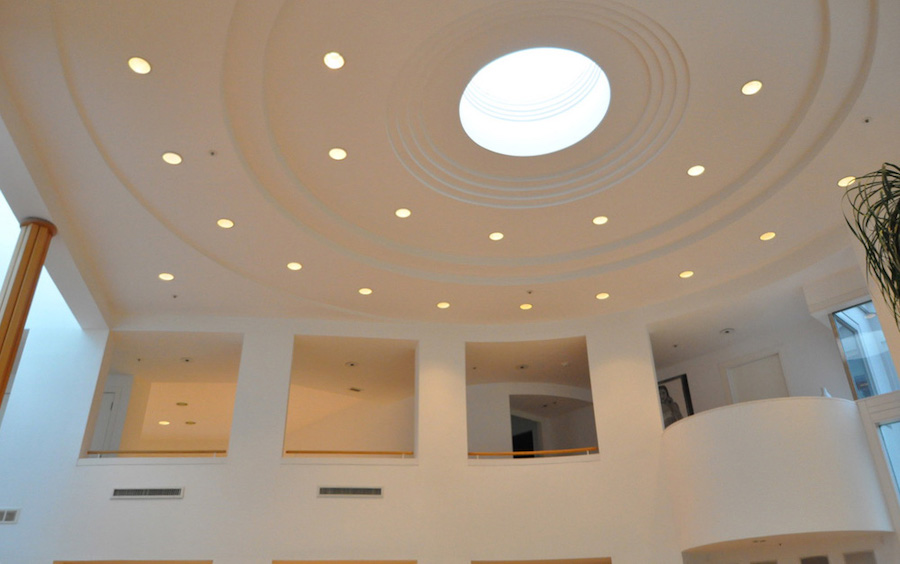 The most dramatic curves reside in the two-story-high living room. Here, high modernism and Art Deco coexist harmoniously thanks to both the curves and the gentle coffers surrounding the oculus in its ceiling. 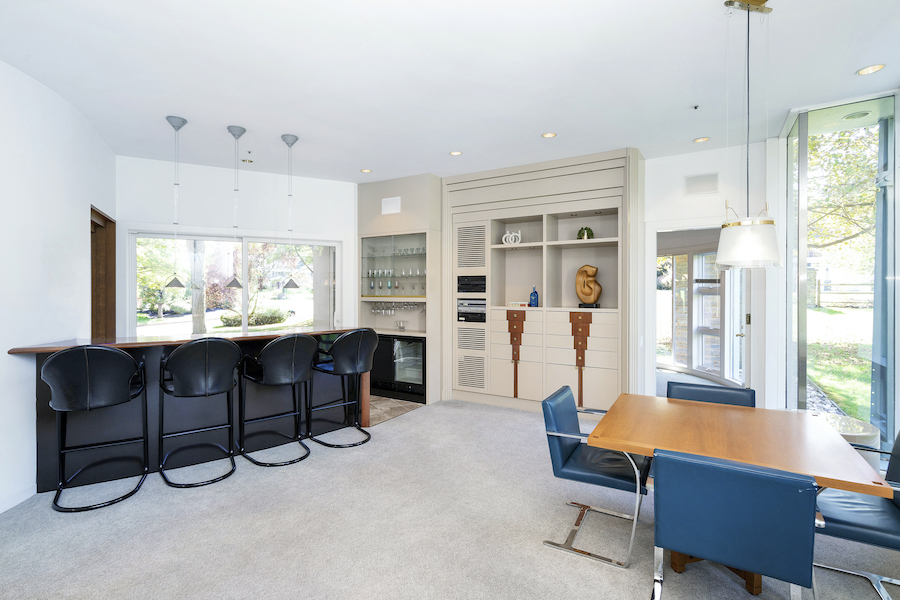 A similar juxtaposition can be found in the first-floor bar.

While modern at heart, the choice of stucco and stone as the chief building materials give this house some traditional heft, and the tile-clad turret adds a touch of the rustic, especially when juxtaposed with the stone facing around the entrance.

That was part of the plan, says Kimball. “We emphasized that we like our neighbors and we like them to like us. They like us, but I don’t know if they like the house.” But the stone and stucco help it fit in better with its neighbors. 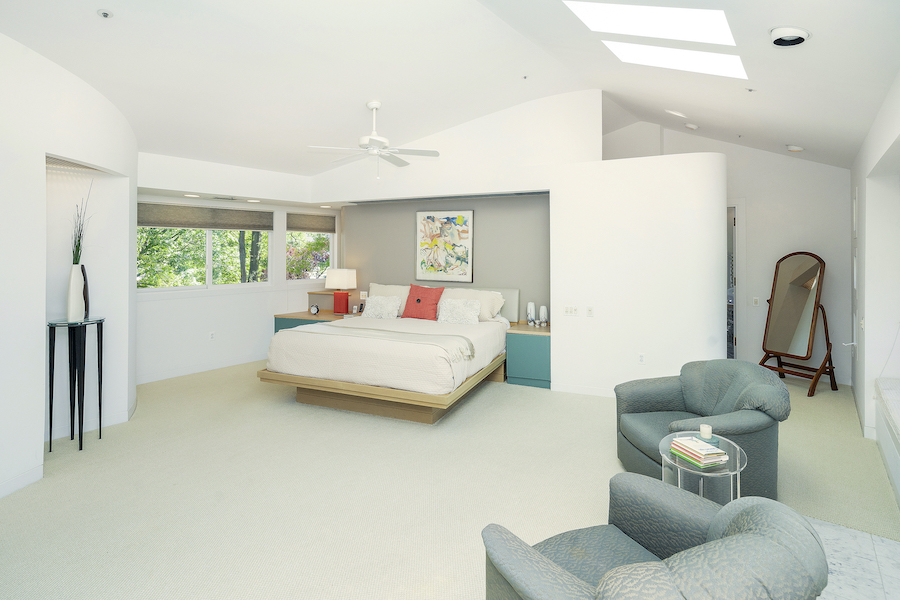 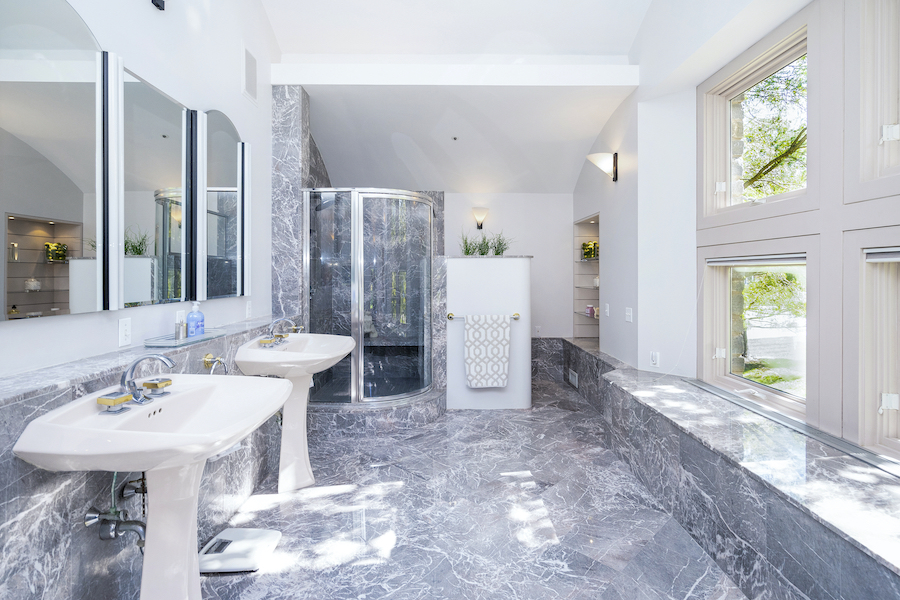 So this house is a real looker. How’s it function? Very well. It manages to pull off a very neat trick: offering an open floor plan the consists of several distinct spaces. Changes in volume and angle and the use of alcoves are among the ways this house pulls off that trick.

But most of all, Kimball says, the light is what makes this place truly special. “You’re inside, but not feels like you’re outside,” she says.

Not only are the spaces enlivened by diagonality, but the basic plan of the house is as well: the main living spaces lie at an angle to the main entrance. And, Kimball says, “the acoustics are incredible.” That ought to be a big plus if you enjoy performing or listening to music. Especially in that circular living room: ”We found that out when we put surround sound in the room. It did not need it.” 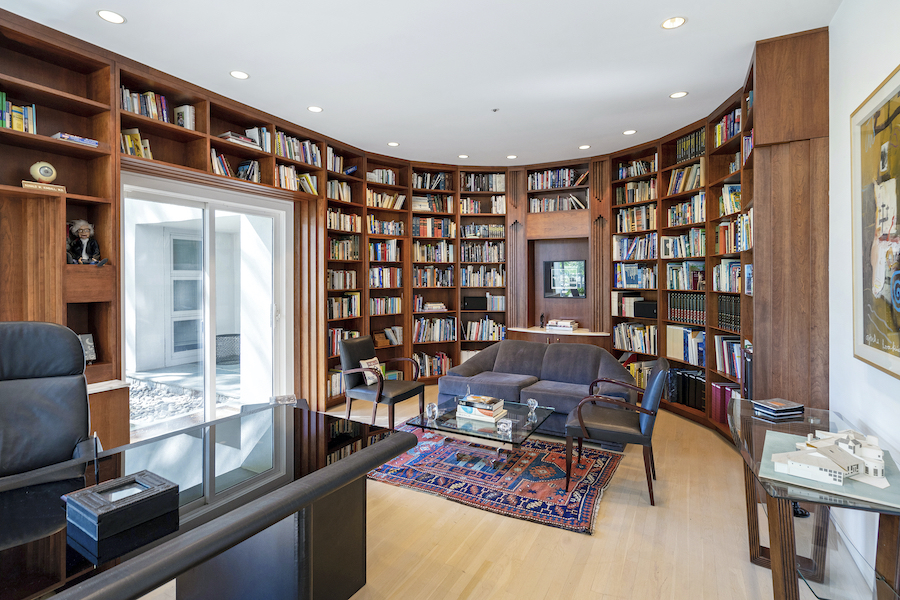 Library. Can you find the secret door?

This house has a space for everything, and for everything, it has plenty of space. In addition to the curvy living room and the oval dining room, it also has a home gym next to the first-floor bar, a reading loft for the kids, and a library whose bookshelves conceal a door to a secret hideaway Ron asked for, a manifestation of his youthful fascination with Sherlock Holmes.

However, Kimball did find out that one element of the house’s design might not work so well in a world where COVID-19 has altered how we use residential space. “The second person to look at our house felt [the open design] was a problem, because they couldn’t close off the offices. 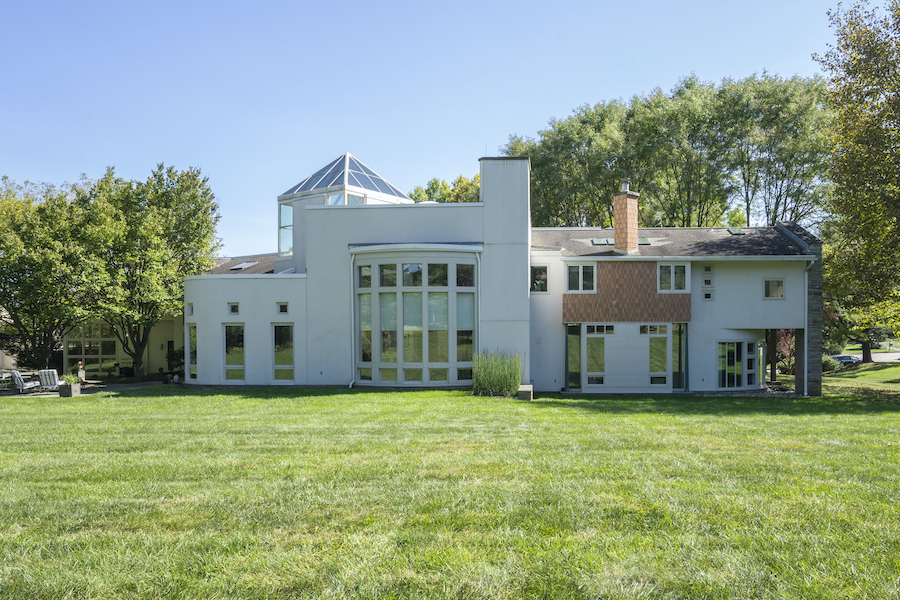 “It would have been great in today’s world, where people are working from home, if there was a way to close them off. It never bothered us, though.”

Just stick a white noise generator inside the office entryway and you should be fine.