On the Market: The Most Expensive House for Sale in South Jersey Right Now

Main Line grandeur and an address with a ZIP code that begins with 0? Only in Haddonfield. (Except this house for sale isn't in Haddonfield, technically.) 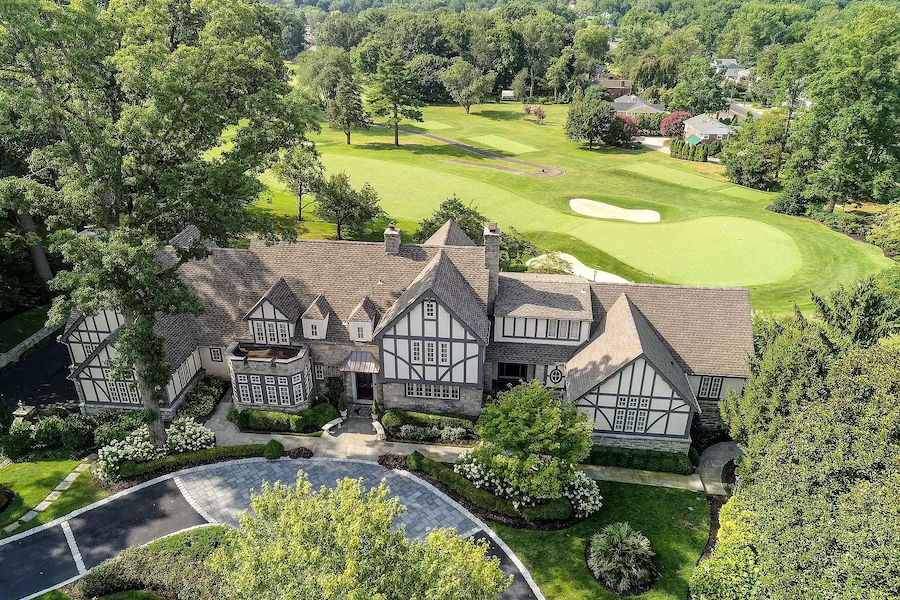 Houses for sale with seven-figure price tags are less common in very-middle-class South Jersey than they are in the Pennsylvania suburbs, but you can find them in two communities in particular: Moorestown and Haddonfield.

Which is where the United States Postal Service says you will find this sprawling Tudor mansion.

It’s not in Haddonfield, however. If you look at the photo above, you should note that this house backs up onto the green of one of the holes at the Tavistock Country Club.

Which puts this house for sale in the Borough of Tavistock, a tiny municipality formed in 1921 by executives of the Victor Talking Machine Company in order to allow country club members to play golf on Sunday, an activity prohibited under Haddonfield Borough’s blue laws. (This would also come in handy once Prohibition ended, for it also allowed the country club to obtain a liquor license, something else forbidden to this day in dry Haddonfield.)

How tiny is Tavistock? According to the 2010 Census, it has a population of five. That’s down from a population of 24 in 2000 and 35 in 1990. That makes it the least populous borough in New Jersey, with seven fewer residents than Pine Valley (coincidentally, also home to a golf course, and also located in Camden County).

I’d like to know where those other 30 residents went to, for there are six other houses in Tavistock besides this one. (According to the 2010 Census data, three of them are occupied year-round.) This one, however, is big enough to accommodate the entire borough population and then some.

It was built in the year the Jazz Age reached its zenith, 1929,  just before the bubble burst. It’s been very well maintained and updated over the years. It was probably an entertainer’s delight back then, too, for it certainly is one now.

What does it have to make your parties really pop? Plenty of space to accommodate guests for socializing, dining and recreation. 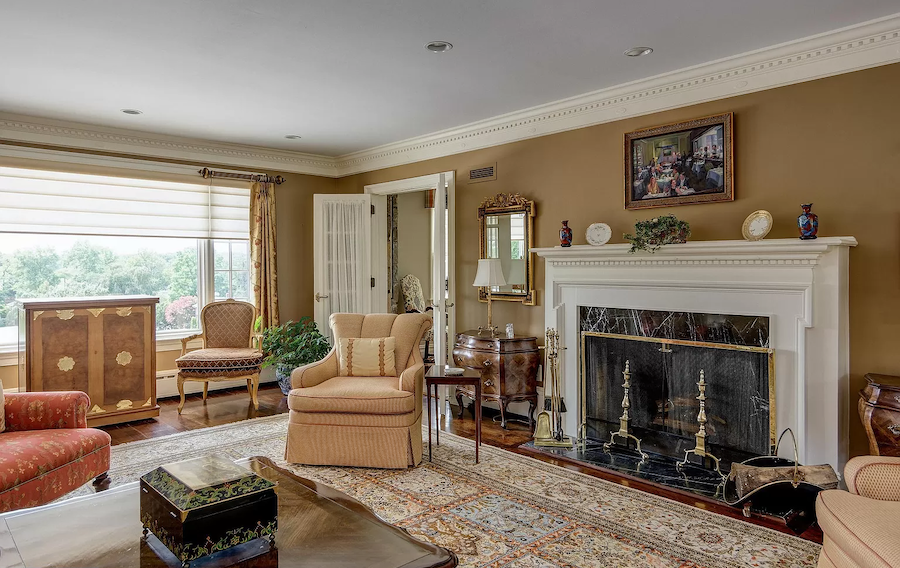 These include a handsome living room, with a wood-burning, marble-framed fireplace; 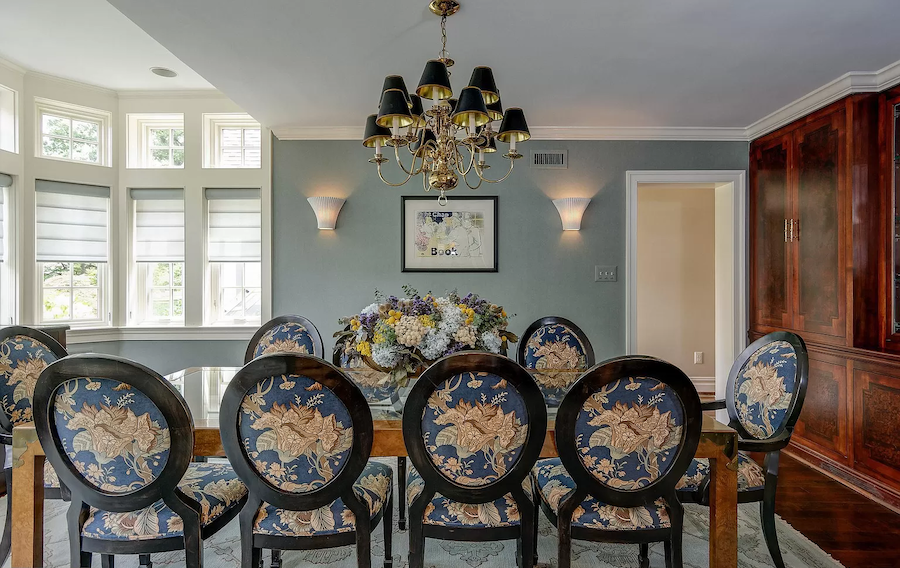 a spacious dining room that gets lots of light from its ample bay windows; 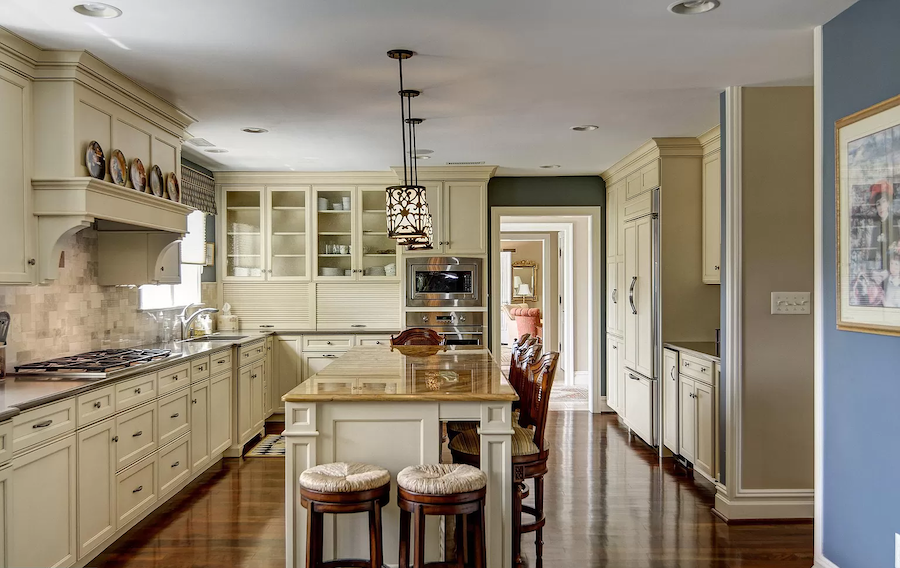 a chef’s delight of a main kitchen, with plenty of quartz- and marble-topped counter space, top-grade appliances and a wine fridge; 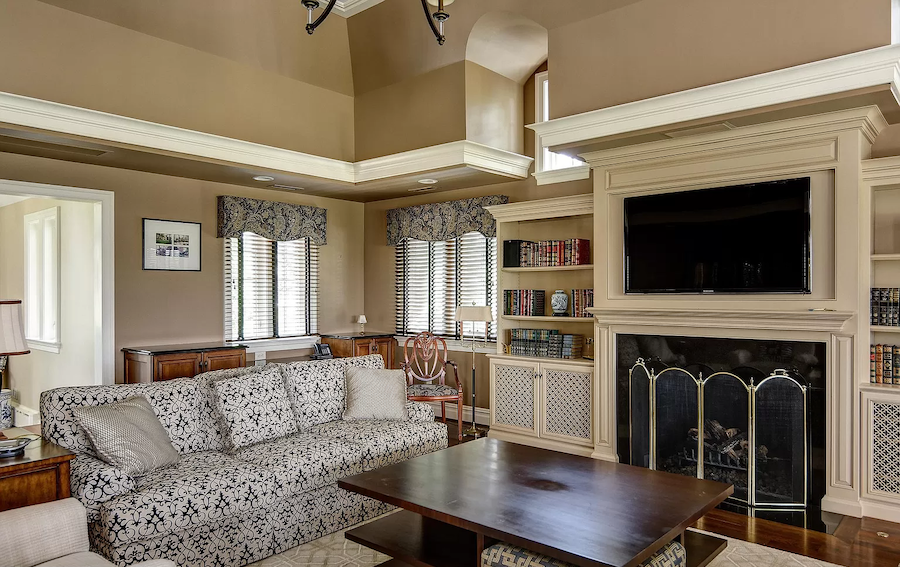 a spacious family room next to the kitchen, outfitted with a gas fireplace, a wet bar, a desk area and its own casual dining area; 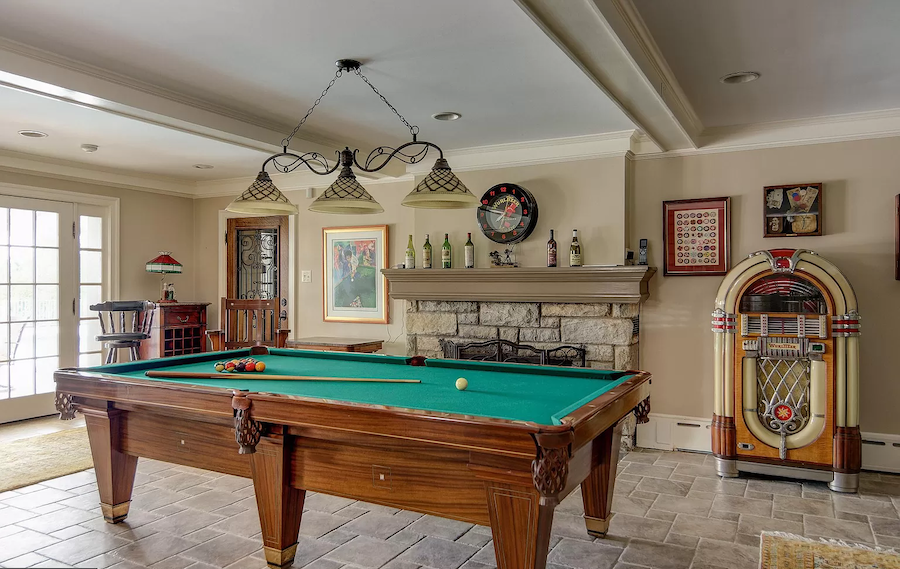 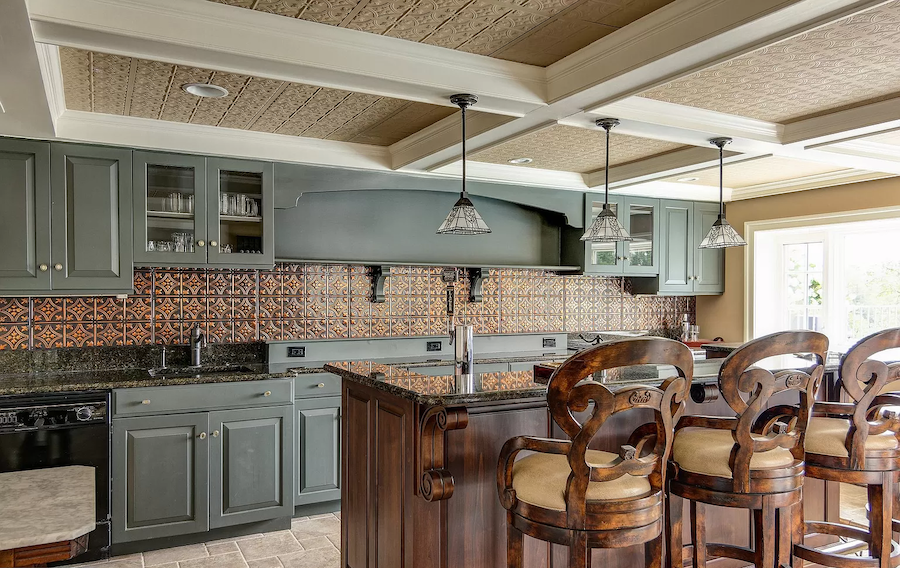 and a walkout basement that’s set up for fun and recreation. It includes a game room, a dry bar and its own fully-equipped kitchen with bar seating. It also contains a walk-in wine room, a gym, a full bath and a powder room. 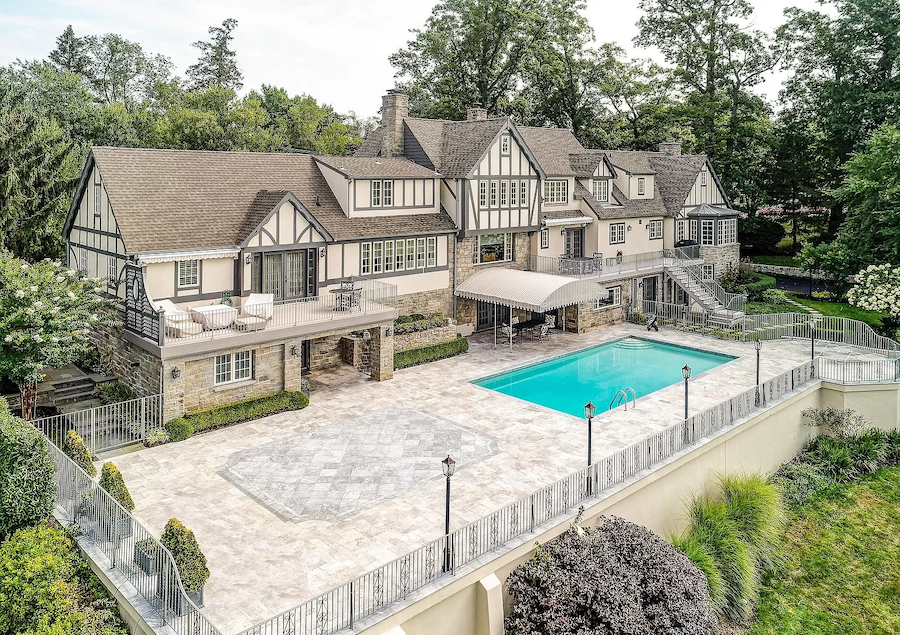 Beyond the basement is a patio with an in-ground pool and a blue marble dance floor. Two balconies off the main floor overlook this space. 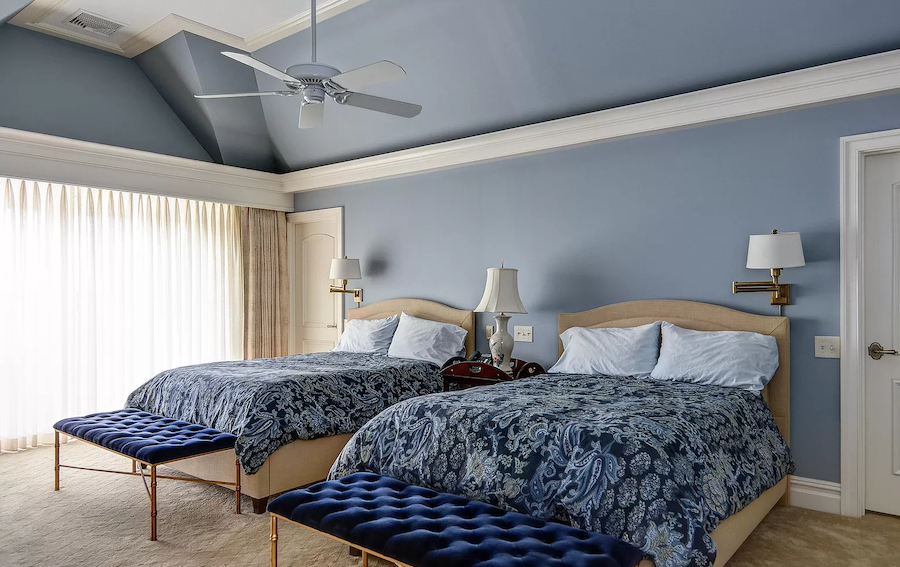 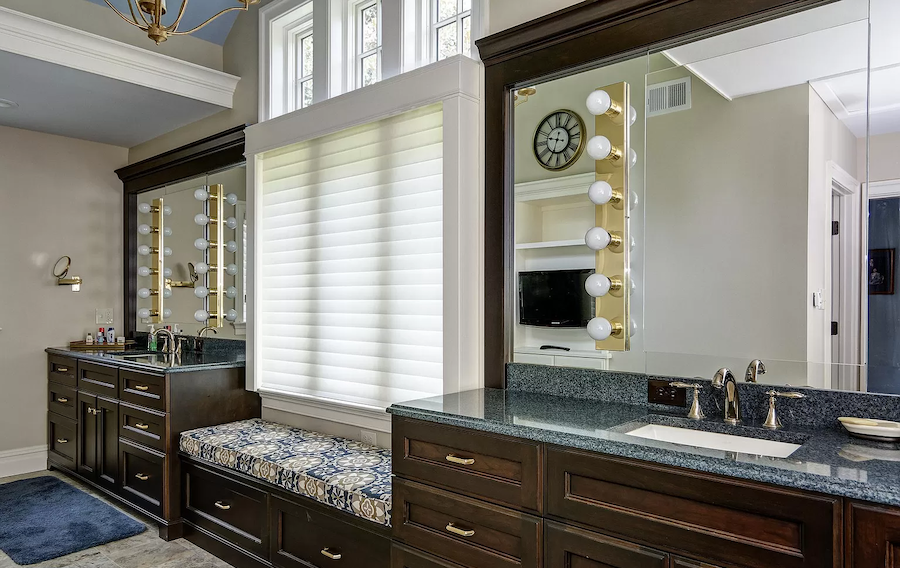 This house also has two master suites, each containing two queen-sized beds. (I guess this is so you can invite your really intimate friends to sleep over with you.) One, pictured here, is on the main floor; the other is on the second. The main-floor suite also has a gas fireplace, a bar and desk area, a large walk-in closet and indulgent master bathroom, while the one on the second floor comes with its own sitting area and two walk-in closets.

A third bedroom and a guest suite also occupy the second floor.

And, of course, all of this overlooks the Tavistock Country Club golf course. (I regret to inform you that residence in Tavistock does not automatically qualify you for membership in the country club.)

Because you have so few neighbors, you may feel occasional pangs of loneliness living here. But that shouldn’t be a problem, for not only can you invite the rest of Tavistock over to this magnificent mansion for a dinner party, you can probably accommodate half of Haddonfield too. Or maybe you’d prefer to just make the short drive over to Kings Highway and stroll Haddonfield’s very walkable, very chi-chi downtown or catch PATCO into the city?

SQUARE FEET:  Not available, but no doubt it’s a large number