Was Dominique Prout unfairly terminated by the popular Fishtown distillery for what she sees as an act of self-defense? 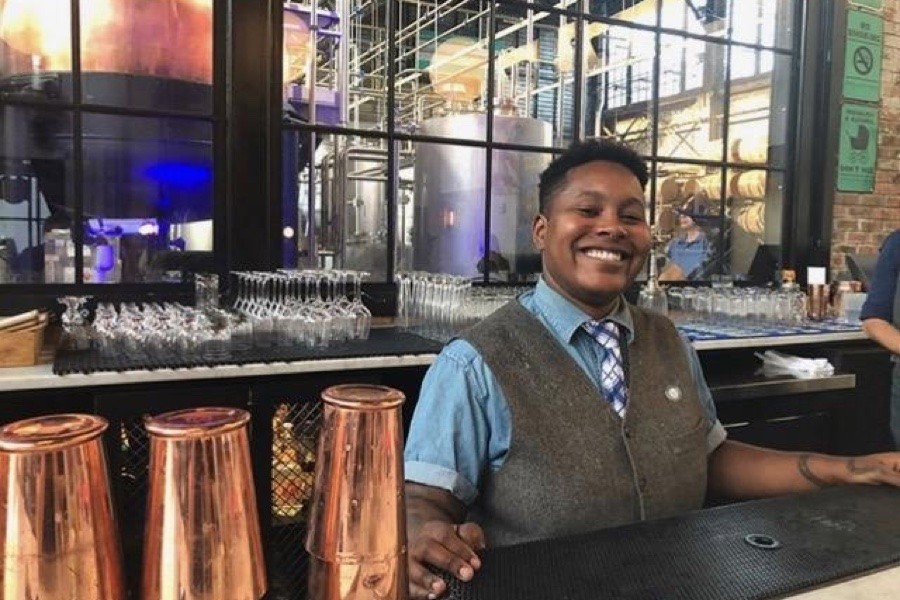 Dominique Prout behind the bar at Philadelphia Distilling.

A former bartender at Fishtown’s Philadelphia Distilling says company management terminated her employment after she slapped a co-worker who had repeatedly used a racial slur in her presence during a company outing in August, while not firing a third employee — a manager — who also became physically involved in an ensuing fight.

Dominique Prout, who has since filed a racial bias complaint with the Philadelphia Commission on Human Relations, alleges that racism ruined a promising opportunity with the city’s pioneering craft distillery.

In a statement, Philadelphia Distilling president Andrew Auwerda said Prout had been a “valued and respected team member” who “by her own admission … was intoxicated during the incident” and “admitted to physical violence against another employee.”

Prout, 31, had moved to Philadelphia from New Orleans in January 2018 to live closer to her family. With an extensive background in craft cocktails and social events, she applied for a position at Philadelphia Distilling, the makers of Bluecoat gin and other spirits, because she was “blown away” with the location. “It felt like a great opportunity, professionally and creatively,” says Prout. After being hired in May, however, she was “stunned” at other aspects of the job.

“I hated the uniform, and there was a severe lack of diversity,” Prout says. “Most of the bartenders are straight white men, but that is very common in the craft bartending industry, and as a black queer woman, it was familiar terrain. The only thing immediately off-putting was right before I was officially hired and I sat down to talk with the owner, Andrew, about the distillery, and he referred to me as ‘well spoken’” — a phrase Prout says is a “microaggression” when said to a black person in a professional setting.

Asked about that exchange in an interview with Philadelphia, Auwerda said he “wouldn’t be surprised if I said that to her — being well spoken is part of the job” of a bartender.

Prout says she experienced other microaggressions “several times” on the job, but that “after 31 years of microaggressions, you learn to sweep that kind of thing under the rug. But eventually this led up to what I would consider a major incident.”

That “major incident” occurred on August 6th, when Prout and 16 other members of the staff went on a work-related field trip to the distillery at Mt. Vernon, George Washington’s Virginia estate. “It was super-uncomfortable going on a tour with a group of white employees and hearing about how George Washington’s slaves helped with his distillery,” Prout says. “It was very awkward how everyone else was marveling at these facts, while I was not impressed and frankly turned off.”

Prout says she saw a manger and one of the distillers “load a huge cooler full of beer onto the bus” before the trip — a foreshadowing of heavy drinking throughout the outing, which she says she also took part in. “We started drinking and had lunch at Mt. Vernon, and then went to two different bars in the D.C. area,” Prout says. “We drank on the bus on the way to those bars. Mostly everyone on the trip had consumed too much alcohol before we even arrived at the first bar. One of my co-workers was so drunk he threw up before we got to the second bar, and people were acting inappropriately.”

It was during this time, Prout claims, that she felt “racial tension” and spoke to a white male co-worker about his use of the n-word. “While on the [distillery] tour, my former co-worker told me that he uses the n-word because he felt it was all right,” Prout says. “I told him not to use the slur around me because I found it offensive.”

Later that night, Prout says, after more drinking had occurred, the co-worker again used the slur repeatedly and a physical altercation ensued: “When he said it, it felt like an assault, and my reaction was to slap him in the face.”

After striking him, Prout says, she told a manager what happened, and the manager, a white woman, “went after him. … They both fell on the ground. She scraped her knees, he scraped his head, and another manager came out and separated them.”

Prout says that she’s “not a violent person” but “felt justified” in slapping her former co-worker. “Racism should be fought,” Prout says she told Philadelphia Distilling’s management following the trip. “But trying to explain to two white men how it feels to be a black woman when a white man says the n-word was impossible.”

Prout claims that Auwerda was “offensive” to her during the company’s investigation into the matter. “Andrew told me that I shouldn’t have conversations about race while drinking, and that if I hadn’t, the employee never would have said anything,” Prout said. “Andrew told me that I provoked him, as if you can ‘provoke’ the racism out of someone. I sat there and I listened to him, because in that moment I still wanted to work there. That feeling started to fade.”

“I may have asked Dominique questions about whether race was brought up to better understand the situation,” Auwerda says. “I wanted to see if both employees were willing to work together despite an incident that involved drinking.”

Both Prout and the other employee were fired on August 10th, immediately following the conclusion of the company’s investigation; the manager was not. Prout claims she was fired in part because she was not willing to “sweep the situation under the rug” and considered it a “double standard” that the manager was not let go as well for intervening in a physical manner.

“I was asked if I would be willing to continue working at the distillery with the other employee,” Prout says. “Essentially, they were either going to keep us both or fire us both.” Prout also claims that Auwerda also spent a “good deal of time informing me of how well he knew the other employee and how much he liked him. … At no point did any of them apologize to me for what happened. I believe that I was the victim of a racially motivated assault, and if one of your employees is assaulted, you should care.”

“I was not on the trip, so I was not an eyewitness to anything,” Auwerda says. “But to my knowledge of the incident, the manager in question was not violent but only tried to quell the situation between both employees.” He says Prout was terminated due to “violating the company’s code of conduct,” which prohibits “fighting or threatening violence in the workplace towards a guest or co-worker”; he later sent Philadelphia a copy of the conduct document signed by Prout when she was hired. Auwerda also sent the following formal statement:

Dominique was welcomed into our company and up until the incident in question, was a valued and respected team member. By her own admission, and other eyewitness corroboration, she was intoxicated during the incident, does not recall all the events of the evening and admitted to physical violence against another employee.

Employee #2 had been with the company for 2 years, had an excellent service record and was a valued and respected team member as well. This employee admitted to using offensive language and was apologetic for their unacceptable behavior.

Each employee was terminated for their own actions. We have a zero tolerance for such infractions to our stated policies. The company lost 2 valued employees and the individuals lost great jobs with a thriving company.

Prout, who does not dispute that she was intoxicated and cannot recall everything that transpired during the trip, shared with Philadelphia an email that she sent to Philadelphia Distilling’s general manager, Barry Enders, and Auwerda following her termination to inform them that she “left the distillery feeling violated, unseen, and horribly alienated. … Use of the word nigger is an act of violence and is a precursor to physical violence. It is a form of hate speech and therefore, abuse. When someone uses this word, especially after being asked not to, they are threatening the safety of a black person. Self defense is an appropriate response to a threat.”

Prout is currently awaiting a response from the Philadelphia Commission on Human Relations regarding her complaint. Enders and Prout’s other former Philadelphia Distilling co-workers, including the other employee who was fired and the manager who was not, did not respond to Philadelphia magazine’s requests for comment.