8 Ways to Honor Juneteenth in Philadelphia

Juneteenth is now an official holiday in Philadelphia and Pennsylvania. There are a number of ways to partake, even during a pandemic. 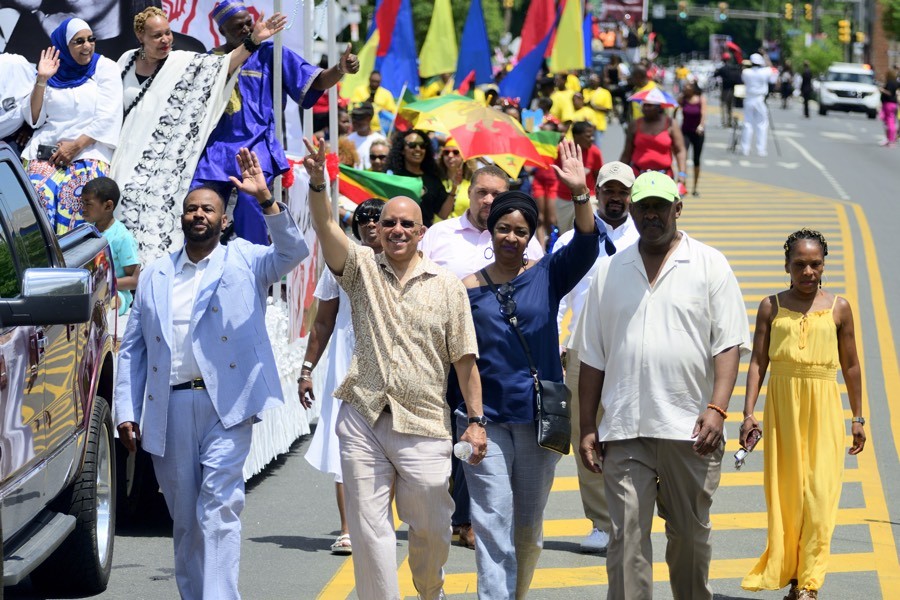 Philadelphia politicians march in the 2019 Juneteenth parade. Many celebrations of the holiday will be virtual this year. (Photo by Bastiaan Slabbers/NurPhoto)

This year will mark the 155th anniversary of Juneteenth — a commemoration of the day in 1865 when the last enslaved people in the deepest parts of the Confederacy were emancipated. It will also be Pennsylvania’s first official statewide observance and the first year that Juneteenth is an official holiday in Philadelphia. The celebrations are usually colorful and vibrant, bringing out crowds to honor the occasion. The pandemic, which is keeping many people indoors, will likely change that. (The annual parade has been postponed for public health reasons related to COVID-19, and the organization behind it has provided resources for celebrating while in quarantine.) However, Juneteenth is highly visible this year for other reasons. The importance of the day is being amplified as the nation reckons with centuries of racial inequality and inequity. Protesters for Black Lives Matter are fighting for reform on several levels, calling for an end not just to rampant police brutality, but also to racism in the workplace, to misogyny, and more. There are a number of events — many virtual, some in-person — at which you can patronize Black businesses, immerse yourself in Black history, and otherwise be a part of this moment.

FESTIVAL
Virtual 14th Philadelphia Juneteenth Festival
For more than a decade, the Johnson House Historic Site has organized a Juneteenth street festival in Northwest Philly. This year, the museum will be hosting a five-hour online festival featuring historic reenactments and music.
Saturday, June 20th, noon to 5 p.m.; livestream on Zoom and Facebook.

THEATRE
Virtual Liberty to Go to See
Cliveden presents an annual Juneteenth theatrical event, and this year’s installment will include introductory speakers, a video adaptation of Liberty to Go to See, and a Q&A with the director, the writer and actors. The play is based on a script by Philadelphia Young Playwrights and inspired by stories found in the Chew Family papers, the records of an immigrant family associated with William Penn in the 18th century. The production looks at themes of race, class divisions and freedom through the eyes of family members and the people they enslaved.
Friday, June 19th, 7 to 9 p.m.; free tickets ($10 donation suggested) available here.

PAINT PARTY
ARTrageous Birthday & Juneteenth Event
ARTrageous Brush & Flow, an art studio and BYOB venue between Cliveden and the Johnson House, is commemorating both Juneteenth and the studio’s birthday with a livestreamed Paint ’n’ Sip session. ARTrageous will be open throughout the day to sell kits so you can participate in the group painting from home.
Saturday, June 20th, 10 a.m.- 6 p.m., 6345 Germantown Avenue, Germantown; free registration here. Paint ’n’ Sip will livestream on Instagram and Facebook at 4 p.m.

EXHIBITION
Juneteenth With the Museum
The Museum of the American Revolution will celebrate Juneteenth with a busy but enlightening virtual exhibition that includes a one-woman show from the perspective of an enslaved woman who ran away from George Washington’s Philadelphia residence; a Q&A with the actors and the museum’s manager of gallery interpretation; and a virtual discovery cart, all via livestream.
Friday, June 19th, noon -11:45 p.m. Different performances will be livestreamed on Instagram and Facebook; check the event page for details.

FESTIVAL
Celebrate the Diaspora!
The African American Museum in Philadelphia will offer a virtual exhibition in partnership with local organizations throughout the city, including WURD and the Pennsylvania Juneteenth Coalition. On Saturday, the AAMP event will feature a lecture, a poetry reading, a conversation with Kamau Ware of Black Gotham, and a concert.
Saturday, June 20th, 11 a.m. to 3 p.m.; free tickets available here.

FASHION SHOWCASE
Black Lives Matter — Fashion Protest
This event offers a way to get your feet on the ground and be a part of the historical moment in person. (You can stream online, too.) Brand management group World of Grandeur is hosting a runway show and art performance protest to raise funds for your choice of bail funding, community rebuilding or police defunding. You can see three fashion collections and art performances, then join a march that concludes at the Liberty Bell Center.
Friday, June 19th, noon to 2 p.m.; $1 to watch the live stream, $5 to attend. Register here.

FOOD DRIVE
Everybody Eats with Cooks for the Culture
The chef collective Cooks for the Culture was recently in the news for organizing a food-and-essentials donation event for West Philadelphia residents in response to several grocery-store closures in early June. Complete with a DJ and a team of volunteers, the group gave away sandwiches, produce, toothbrushes and more to some 600 residents. The chefs are planning another such drive, along with a fish fry, on Friday in North Philly and West Philly in observation of Juneteenth. Details are still forthcoming, but for now, you can contribute to the cause financially, as a volunteer, or by bringing food and goods to these restaurants.
Friday, June 19th; West Philly: 11 a.m. at Universal Daroff Charter School, 5630 Vine Street; North Philly: 4 p.m. at Hank Gathers Recreation Center, 2501 North Diamond Street,.

COOK ALONG
A Taste of African Heritage
Try your hand at quarantine cooking, learn a new recipe from the African diaspora, and celebrate Black history for Juneteenth all in one go, and all from the comfort of your home. On Thursdays, the Free Library of Philadelphia is hosting virtual cooking classes focused on healthy food traditions with African roots.
Thursday, June 18th, 5:30 p.m., and Saturday, June 20th, 2 p.m.; free registration here.