REVIEW: Arden’s Every Brilliant Thing is a Tour de Force for Scott Greer

Philly’s love affair with this superb actor has never been more heartfelt. 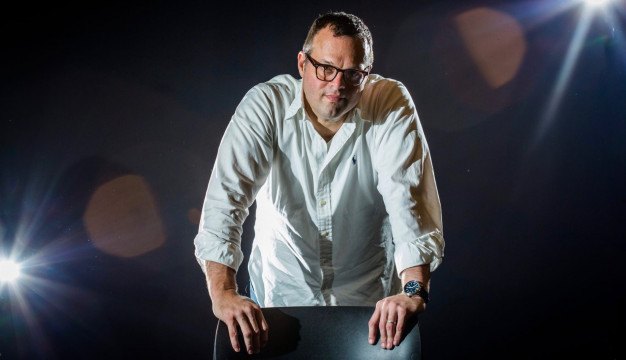 Scott Greer in Every Brilliant Thing at Arden Theatre Company.

Philadelphia audiences cannot get enough of Scott Greer. If you are already familiar, likely you don’t need my review, and you will already have tickets for Every Brilliant Thing at the Arden. (I hope so—it’s a small space and will sell out quickly, if it hasn’t already!)

If you have yet to discover The Greer Factor, this production is as good a place as any to start.

For starters, it’s a one-actor play—though that isn’t quite accurate, because members of the audience appear too, offering comments written on cards that Greer hands out before the action begins. The script itself, by playwright Duncan MacMillan with Jonny Donahoe, is cunningly constructed and beguiling, reassuring an audience who are anticipating the difficult subject matter.

You see, Every Brilliant Thing is about suicide. The central character’s unseen mother first attempted it when he was a child, and he felt powerless to understand it. In an attempt to help her through, he begins a list of reasons that life is worth living. These are titular “brilliant things,” and unlike the proverbial bucket list, they are mostly rather ordinary (#1 is ice cream, for example).

It’s a sweet premise, and Every Brilliant Thing largely dwells on the hopeful side, content to skim over this exceptionally tough issue with a light touch.

I have mixed feelings about that, but nothing but admiration for its star. It’s a thing of beauty to watch Greer in conversation with the audience, charming them into willing, even enthusiastic participation (that’s quite a trick, I think). Sometimes everything goes smoothly, but it’s almost better when it doesn’t—then we see Greer improvise, which again is a marvel.

But it’s in the quiet moments where we really see the artistry. Greer adds complexity and emotional resonance that goes far deeper than the words.

And yet—I wonder if he’s the ideal actor for this assignment. Scott (like everybody else in a Philly theater audience, it feels like we’re friends) is a shining light, a comfortably enveloping blanket, a soothing piece of music. (Yes, I know I’m mixing metaphors—but see for yourself and you’ll understand.)

All of this has the ultimate effect of softening the harsh topic. I can imagine a less ingratiating performance might penetrate through some of Every Brilliant Thing’s facile surface and find more bite.

Trust me, though—you won’t care while you’re watching it. Philly’s love affair with Greer has never been more heartfelt, and you won’t want to be left out.