This glossy but glib production is enjoyable but adds little of substance to Ibsen’s original. 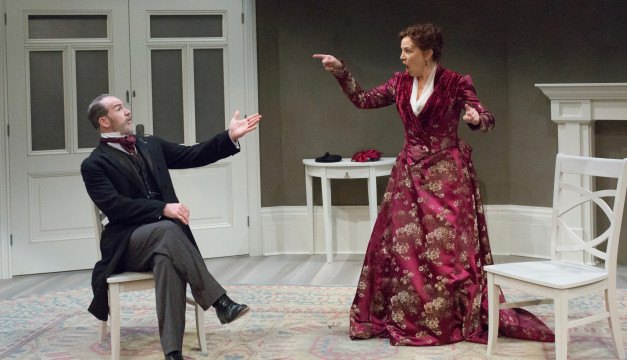 Steven Rishard and Grace Gonglewski in A Doll’s House, Part 2 at the Arden. (Photo by Mark Garvin)

For nearly 150 years, one of theater’s most tantalizing mysteries has been what became of Nora Helmer. At the end of Henrik Ibsen’s A Doll’s House, the still-young wife and mother, searching for a more meaningful life, walked out on husband Torvald and their children, leaving the question unanswered.

Till 2017, at least. That’s when playwright Lucas Hnath decided to revisit it with A Doll’s House, Part 2, which finds Nora returning home 15 years later to resolve unfinished business. It was nervy for sure for Hnath to, um, reopen the door—especially since ADH2 (let’s call it that for brevity) is mostly a punchy comedy, running barely 90 minutes. Is it audacious of Hnath? Arrogant? Audiences will need to judge for themselves.

My own reaction, based on the Arden production, is mixed. That Hnath’s venerates the original is never in doubt. He works carefully within the given roadmap, circling back to reinforce Ibsen’s points. If anything, he’s too careful and even-handed, offering something to all satisfy all sides. Those who admire Nora’s choice to leave will be pleased to learn she did indeed make something of her life; those who condemn her will take comfort that she’s still paying dearly for it. Torvald emerges as more sympathetic than we might have imagined, if still pretty clueless.

Hnath also preserves some of Ibsen’s wonderful ambiguity. All of this speaks well for him, as does the snap of his dialogue. Ultimately, though, while ADH2 might kindle a few conversations, I don’t think it adds much substance to Ibsen’s play.

At least not as seen at the Arden’s glossy but glib production. Some of the problem is the writing, peppered with contemporary locutions, and embedded with too much cute snark in the encounters. For better or worse, ADH2 is surely meant to be funny.

But even the broadest farce has a backstory and nuances. One could scarcely imagine a richer source material for that than A Doll’s House. Yet in director Tracy Brigden’s staging, you’d hardly think anything at all happened before Nora returns to her old home. The first 20 minutes feel like what in theater is called an “Italian rehearsal,” a process that involves rushing through the action at high speed and with maximum energy. It’s meant to give a production momentum and sparkle—but as a step along the way, not an end in itself.

Things settle in and improve when Nora (played here by Grace Gonglewski) engages with Torvald (Steven Rishard). Rishard manages to imbue Torvald with a sense of hurt pride that gives ADH2 some needed gravitas. Gonglewski, a skillful and charismatic actress, finds an intriguing tough-cookie quality, but her performance needs more variety. In supporting roles, Joilet Harris (Anne Marie, the former nanny) and Grace Tarves (Emmy, the daughter) tip the show too far into comedy.

Arden’s A Doll’s House Part 2 provides an entertaining way to spend an evening, and will likely provoke some conversation, but I wouldn’t call it a slam dunk.