REVIEW: In Salt Pepper Ketchup, A Not So Beautiful Day in the Neighborhood

The restaurant setting has a sense of authenticity; the action in it, not so much. 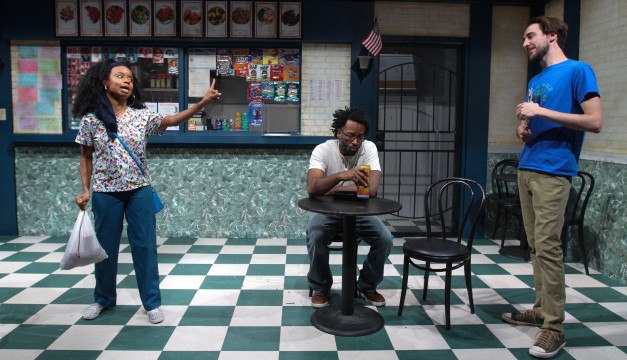 Say this, at least, for Salt Pepper Ketchup, on stage now at InterAct Theatre—it surely has immediacy on its side. Josh Wilder’s earnest but uneven play is set in the present day, only a few blocks away from InterAct’s home at the Drake. Walk just a bit over half a mile southward, and you, too, will find yourself in Point Breeze.

Or do I mean Newbold? Ay, there’s the rub. Because we are talking about the same place—and yet, of course, we aren’t.

Point Breeze is a historically working class, ethnically diverse neighborhood. In Salt Pepper Ketchup, it’s represented by John and Linda Wu’s Superstar diner, a low-end Chinese restaurant that largely caters to an African American clientele. There’s grousing between the married proprietors and their customers, all longtime area residents. But in the end, the grimy takeout joint is an important community resource, providing tasty (if not entirely healthy) food at a reasonable price, and service with…well, not a smile, but a modicum of respect.

Newbold is less an actual place than a real estate brand, a reconceived Point Breeze quickly gentrifying into a younger, whiter, wealthier neighborhood. The looming symbol of this new affluence is a food co-op that through its chief spokesman, a cheerful but not entirely likable young man named Paul, wants to lead the local citizenry to a healthier, happier way of life. (Bring on the two-dollar apples.)

What follows is an uneasy turf war, where old loyalties dissolve and new allegiances develop. There are some provocative ideas in Wilder’s play, and our current political landscape reminds us on a daily basis that the ugliest things we see here are all too rooted in reality.

But Salt Pepper Ketchup oscillates across a too-wide stylistic spectrum, from social realism to melodrama to heavy-handed satire. The characters are drawn in overly broad strokes and don’t always escape the realm of stereotype.

Worse, Salt Pepper Ketchup is so unrelentingly agenda-driven that nearly every line and moment exists solely to illuminate the conflict, which itself is also too broadly drawn. This is a play where Paul can say, apologetically and with little irony, “My white privilege can come across as overbearing.” Wilder’s script works best when it’s closest to comedy: Miriam White turns in a funny performance as Megan, the co-op’s community organizer, who is a like a walking PBS tote bag. But this, too, is a cliché.

Although Colin McIlvaine’s restaurant set has a real sense of authenticity, the events that happen within it feel far more artificial. Still, two performances—Mark Christie as Tommy, a neighborhood kid, and Chuja Seo as Linda Wu—stand out.

Wilder clearly wants Salt Pepper Ketchup to be a play of ideas, and there’s nothing wrong with that. But the best way to realize those ideas is through believable characters and nuanced interactions. Here, that’s only intermittent.