REVIEW: In Wilma’s Mr. Burns, A Post-Electric Play, Let There Be Light…Please! 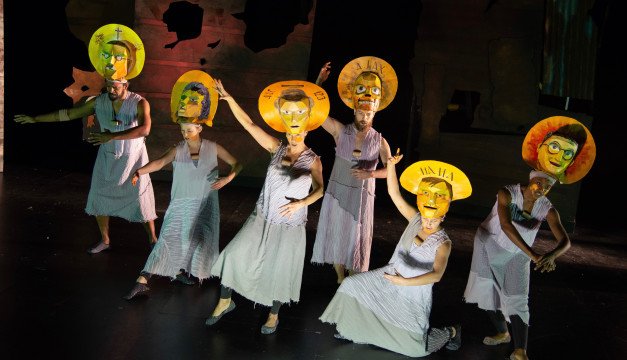 I don’t think the problem is the script—rather, it’s the showy, often self-congratulatory, sometimes incomprehensible production seen here that nearly does it in. Before we get to that, though, let’s consider Anne Washburn’s play.

As the title suggests, we are in world catastrophically, if not quite apocalyptically, deprived of power. How or exactly when it happened remains mysterious. What we do know is that we are given a window into three different episodes, spanning a period of 87 years.

In the first, a group of people huddles together trying to keep warm and safe, and when a newcomer enters they go through what seems like a familiar ritual: sharing the names of people they want to find, hoping to rekindle lost connections. The second, seven years later, involves a theatre company—there’s still no electricity, but the troupe has the ingenuity and wherewithal to perform somehow, and entertainment is needed more than ever. Episode #3 is…well, I’m not going to tell you.

So who is Mr. Burns, you ask? Well, that’s the play’s signature (and, I think, why it’s been hugely popular with hipster audiences since its 2012 premiere). A key reference point throughout is The Simpsons. In a world where nearly everything has been lost, this beloved television series remains a universal touchstone. It even seems to grow in iconic stature, much as Shakespeare has in the centuries following the Renaissance.

At least, that’s what I think Washburn’s play, a sly and poignant satire about what survives and what doesn’t, is meant to be.

What we see on stage at the Wilma is a high-octane, often farcical performance piece. The show is full of visual éclat (scenery is by Misha Kachman, lighting by Thom Weaver, costumes by Meghan E. Healey). The cast—Ross Beschler, Sarah Gliko, Jered McLenigan, Campbell O’Hare, Brett Ashley Robinson, Lindsay Smiling, and Mary Tuomanen—give bravura performances that include singing and dancing. Some of it is fun, even dazzling.

But from the get-go, this production, over-directed by Yury Urnov, adds unwelcome layers to an already complicated play, and it gets more ornate as it moves along. The final act is a campy pageant, more of a winking reflection on the Wilma’s long history of directorial invention than a thoughtful exploration of Washburn’s elliptical and intriguing script.

I left Mr. Burns exhausted by Urnov’s imagined cleverness, and still confused as to the central point of the play. Indeed, the show felt like the ultimate irony—that in a post-electric world, so much energy is expended in the service of something so trivial.