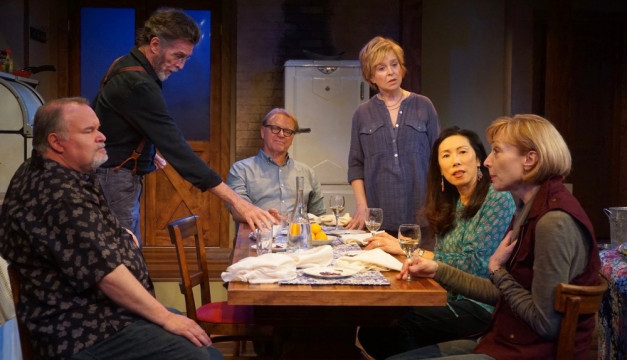 The Cast of Fern Hill at New Jersey Repertory Company.

In Michael Tucker’s Fern Hill, three couples—ages ranging from 60s to 80s—are gathered in a lovely farm house in upstate New York. Presumably, Tucker means the title to evoke Dylan Thomas’s poem of the same name, a gorgeous ode to the bucolic allure of country life, remembered from the rueful perspective of age.

Tellingly, Tucker chose Fern Hill rather than Thomas’s better known and more corrosive poem about aging, Do not go gentle into that good night, with its famously angry refrain: “Rage, rage against the dying of the light.” Indeed, the mood in Tucker’s sometimes enjoyable but underpowered piece is largely gentle, and—though peppered with the occasional expletive, craftily designed to make his refined characters seem hipper—Fern Hill is a wan, vanilla version of old age and its hazards.

Too bad, because there’s so much potential here. Though one of Fern Hill’s themes—marital infidelity—is familiar terrain in theater, two others are not. One is the sex lives of elderly people; another is how, where, and in what community we will spend our, shall we say, last act. (The Fern Hill farm takes center-stage for the latter, as the characters contemplate creating a kind of commune which will allow them the pleasure of each other’s company while making sure they’re not a burden to their children.)

I’m now 62, which makes me sort of entry-level in the world of Fern Hill—but already I know that both of these topics are very real… and—theatrically speaking, at least—under-explored. It’s brave of Tucker to make them front and center.

Alas, having put them out there, he does very little with either theme. Early on, one of the younger characters, Billy, waxes ecstatic about cooking the perfect clam sauce. As he describes each ingredient,  he seems to savor it with almost orgasmic bliss. It’s a long-ish monologue, delivered with winning charm by actor Tom McGowan—but it feels like an applause-courting set piece, rather than actual conversation. And it sets the tone for Fern Hill.

Time and again, Tucker leads us to big questions, but stops short of anything truly painful or disruptive. The members of the group are, to a person, energetic, attractive, and successful. Even the eldest of them, Vincent (played busily by John Glover)—82 and recovering from a hip replacement—endures his suffering with raucous humor (and also sports a gloriously full head of hair). Any reservations about how these people will fare financially are settled in a few sentences; the easy, unquestioning affluence of Fern Hill is stamped on every scene.

New Jersey Repertory Company’s production, directed by Nadia Tass, boasts a glossy cast of familiar actors—in addition to McGowan and Glover, they include Jill Eikenberry, Dee Hoty, Jodi Long, and David Rasche. All display a canny level of professionalism and aplomb in trying to make flesh and blood of these underwritten parts, but only Rasche, in a beautifully calibrated, quiet performance, provides a real sense of dimensionality.

Attending the show’s opening, it was striking how similar its characters are to the demographics of the show’s audience. Surely Tucker knows that regional and community theaters throughout the U. S. are themselves very much the world of people in their 60s and beyond. I can imagine Fern Hill getting multiple productions around the country.

If only there were more to the play—if Tucker, having opened the door, had actually walked through it to darker and more interesting places.