REVIEW: In His Girl Friday at Hedgerow, Screwball Comedy That’s Trying Too Hard
Subscribe
Follow
I'm a scraper
This search result is here to prevent scraping

REVIEW: In His Girl Friday at Hedgerow, Screwball Comedy That’s Trying Too Hard

Summon the ghosts of Rosalind Russell and Cary Grant at your peril. 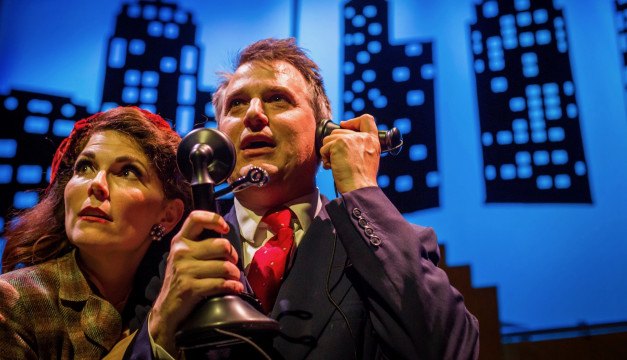 Of how many famous plays can it be said that their film adaptation was a major step up?  One for sure is The Front Page. Ben Hecht and Charles MacArthur’s 1928 comic drama—a snappy ode to journalists who tirelessly cover crimes and heroically fix injustices—has succeeded handsomely in multiple Broadway productions.

But the 1940 movie version, retitled His Girl Friday, lifted the play to a whole new level. Hecht and MacArthur, working with screenwriter Charles Lederer, altered one detail that made all the difference. Walter Burns and Hildy Johnson, The Front Page’s two battling newspapermen, here become a man and woman; in fact, they’re a divorced couple whose snarky interactions signal they never got over loving each other.

Presto! A good newsroom genre piece also became one of the supreme battle of the sexes comedies.  It’s a two-for-one, win-win scenario.

It’s natural that we come full-circle with a stage version of His Girl Friday, but this brings us up against a different problem. For all the greatness in the writing, it’s the two central film performances—Rosalind Russell as Hildy and Cary Grant as Walter—that made the movie immortal. Russell and Grant are at their incomparable best, impossibly glamorous and delivering every line with astonishing and seemingly effortless comic panache.

There’s no better example of high style screwball comedy on film, and it sets an impossibly high bar. Summon these ghosts at your peril. Mere mortal actors—even really good ones—have about as much chance of equaling Grant and Russell as I have of climbing Mt. Everest.

Still, by less lofty standards there’s some fun to be had in this adaptation, devised by Damon Bonetti (who also directs) and Jared Reed (who plays Walter).  One of the cleverest touches is using an ensemble of four actors (Adam Altman, Owen Corey, Jennifer Summerfield, and Mark Swift) to play all the supporting roles. The quick changes and bold-strokes characterizations are handled energetically, and the audience ate it up. I wish Bonetti had gone even further with it, letting the actors really do all the work, and going for a more minimal physical production. As it is, the scenery is a weird mix of doors and screens that fails to suggest any sense of period style. They’re reconfigured frequently in shifts that slow the action and break the momentum.

Reed, a masterful actor with a sense of style, fares best here. Jessica DalCanton makes a game try at the wisecracking-but-sentimental Hildy. They have some chemistry and look terrific together, but both are pushing too hard—speed is important in screwball comedy, but only if it’s accomplished with a sense of ease. On opening night, they were only halfway there. The show more generally looked under-rehearsed. At the other end of the spectrum, the poignant moments were also played for broad laughs. The film of His Girl Friday is actually about some very significant issues; they barely register here.

The show may yet come together more fully, as the company works their way into it. My major takeaway on opening night was to be reminded that screwball comedy may be the most difficult of all genres to bring off. Those ghosts can be cruel.