7 Philly Magic Shows You Should See this Summer 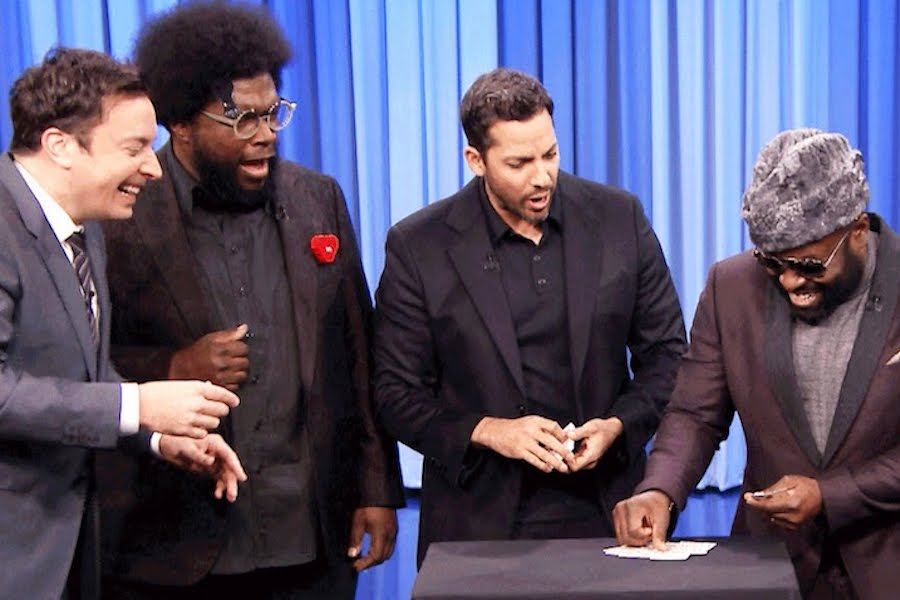 David Blaine mesmerizes Jimmy Fallon and members of the Roots. (Image via YouTube)

My editor didn’t want me to write this, because he thinks all magic shows suck. But I disagree. Oh, there’s a lot of sucky, schmaltzy, and just plain terrible magic out there. And then there are those few shows that rise out of the muck and mire to actually mesmerize and entertain. Here, seven Philly-area magic shows to check out this summer.

Champions of Magic, Merriam Theater
June 20th through June 24th
This touring magic show featuring five magicians in one night opened on Wednesday and is a good time, albeit a little long. It’s a British production with mostly British magicians, but my favorite illusionist was weirdo-cute American magician Kayla Drescher.

Here she is performing for Penn & Teller:

Magique, The Tropicana
June 24th through September 9th
If you’re a big fan of large scale illusions and magical “extravaganzas,” this is what magical team Kevin and Caruso specialize in. Definitely stop by if you’re in Atlantic City this summer.

This is the trailer for their show on the Boardwalk:

Michael Carbonaro, The Borgata
July 7th
His TV show The Carbonaro Effect is a lot of fun, so we’ll see how that translates to a stage production when the prankster comes to Atlantic City.

Here’s a sample of what he does:

David Blaine, Tower Theater
July 11th
It will be interesting to see David Blaine perform live, since we’re so used to seeing him only on TV. He rarely tours.

Here he is freaking out Jimmy Fallon and the Roots:

Asi Wind, Smoke & Mirrors Magic Theater
July 26th and 27th
Like Penn & Teller and David Copperfield, Asi Wind has received the prestigious (well, it’s prestigious in magician circles) Merlin Award. And David Blaine has actually hired him as a consultant. The night before his performances at Smoke & Mirrors, he’s giving a lecture there on the art of magic.

Here are some highlights from Asi Wind’s repertoire:

Jon Dorenbos, SugarHouse Casino
August 24th and 25th
Wait, didn’t he play for the Eagles? Yep. He’s also a magician. And a motivational speaker of sorts. And a really funny and entertaining guy. It’s not really his magic but the combination of all those attributes that makes his show worth seeing.

This is Dorenbos on America’s Got Talent: