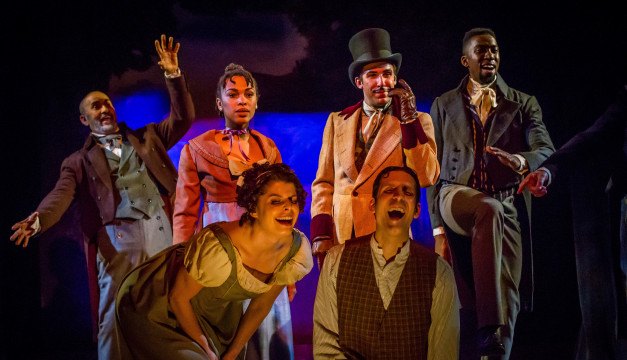 There really was a Maria Marten. In Suffolk, England in 1827, she was murdered by her lover, William Corder. The sketchy and sad details include two children who also died in questionable circumstances and the discovery of Maria’s badly decomposed body more than a year later, disposed of in a grain storage bin in a red barn. Ghostly visions led family members to the site—or so they say.

Likely the sordid details are what led this crime to become the stuff of legend. This much is certain—by the mid-19th century, the Red Barn Murder was a familiar story, recounted in folk ballads as well as multiple theatrical versions.

One such melodrama—likely a collaborative effort but published as if by anonymous author—is delightfully resurrected by Philadelphia Artists’ Collective (PAC).

It’s hard now to have a sense of how this play, a piquant mix of rustic comedy and blood-chilling horror, would have been received by audiences back in the day. Here, director Charlotte Northeast mines Maria Marten for all its absurd hilarity and kitsch. For the most part, it’s a winning strategy.

In the able PAC hands, this means it’s very much a cheer-for-the-heroine (that’s Maria, played here with lovely restraint by the luminous Victoria Aaliyah Goins), and boo-the-villain (the dastardly Corder, a high-style, moustache-twirling virtuoso turn by Dan Hodge at the performance I saw) kind of evening.

The look of the show, too, is also tremendous fun, with scenery (by Brian McCann who also acts in the show) and lighting (Robert A Thorpe and James P Lewis) that cleverly suggest the ornate proscenium, painted drops, and footlight glow that were characteristic of 18thand 19th century theater. A good time will be had by all.

And yet, though melodrama can be played very successfully as camp, it’s more than that. There’s also genuine pathos and heartbreak in the Red Barn story.

At its best, Northeast’s production of Maria Marten manages to suggest this dual layer. I was especially impressed when a scene involving the burial of a child clearly put the audience in an uneasy state, confused about whether to laugh or cry. The silence that followed spoke volumes.  Goins and Hodge are particularly good at finding a tonal balance.

The rest of the cast play more broadly for laughs—not that there’s anything wrong with that. Damon Bonetti was absolutely delightful, relishing the almost entirely comedic role of a doltish village bumpkin. It’s especially fun to see the exceptionally handsome Bonetti, a leading man type if ever there was one, have a chance to do something like this. (Bonetti and Hodge switch roles at different performances, and it would be interesting to see each of them do both.)

Among the able supporting cast, I especially enjoyed Sarah Knittel as Maria’s not-all-there sister and the drily scene-stealing McCann. Andrew Clotworthy, who provides the atmospheric musical accompaniment, as well as reading a kind of prologue to the show, is twice-over terrific.

Early in the action of Maria Marten, a pair of carnival barkers tout the value of their different attractions at a county fair. “Mine’s a legitimate performance!,” shouts one. “Mine’s a variety entertainment!,” replies the other.

That’s melodrama in a nutshell, and PAC’s delightful show delivers just enough of both.