REVIEW: At Lantern’s Don’t Dress for Dinner, There’s a Heavy Hand in the Kitchen

Less here would be so much more. 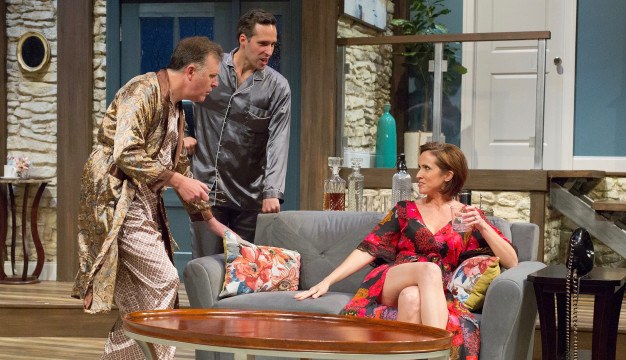 A running gag in Don’t Dress for Dinner, Marc Camoletti’s hit French farce—on stage at Lantern Theater Company in a snappy adaptation by Robin Hawdon—involves a vivacious female graduate of Le Cordon Bleu, who has been hired for a single night at a small but elegant converted farmhouse. She will prepare a sumptuous meal to accompany a weekend of extramarital romance.

Of course, the sex rather than the food is the main menu item here. Still, there are lessons to be learned from what’s going on in the kitchen.

We can intuit, for example, that cooking is a delicate process. It requires precise measurements, perfectly balanced ingredients, a light touch, and just the right amount of heat and time. Mess with any element and what should be a miraculously airy confection will turn lumpy.

Much the same can be said of serving up farce in the theater. There are always some sure-fire set-pieces: slamming doors, physical business. But what really makes a farce work is the nuances—character work, tiny discoveries and reactions, and (most of all) the gradual building of a plot that grows incrementally crazier.

At Lantern, there’s a heavy hand in the kitchen. Director Kathryn MacMillan whips Don’t Dress for Dinner into a froth from the very first moment and rarely lets up. It feels as though the focus is on nailing the comic shtick, rather than revealing the through-line of the play. Though the cast employ broad accents—British and French—there’s something very unspecific about the show, including a large set that barely suggests the French countryside location.

For the record, Camoletti provides an exceptionally clever plot with a lot of fine details. But by the moment in the middle of Act I when actor William Zielinski—playing the frazzled husband Bernard—literally bites into a throw pillow, we have reached the bourn from which no subtlety returns.

It’s Karen Peakes, playing his sly wife, Jacqueline, who wins the evening by drily underplaying. I was also charmed by Lee Minora as Suzette, the saucy cook. The others cast members—Marc LeVasseur, Jessica Bedford, and Chris Anthony—have their moments, but less here would be so much more.

Don’t Dress for Dinner is enjoyable enough and provides its share of laughs. You may well like it better than I did; the opening night audience certainly seemed to. But culinarily speaking, it’s the difference between an exquisite velouté aux champignons and a royale with cheese.