REVIEW: Reliving the ‘60s with Catch-22 at Curio Theatre

Is this once-iconic satire still viable, or a historical curiosity? That is the question. 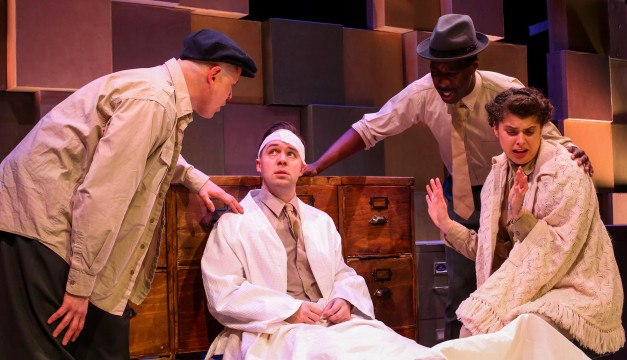 For its title alone, Catch-22 is assured immortality. Author Joseph Heller coined the term, defining a situation with mutually contradictory coordinates, from which there is no solution or escape. It was an idea that needed a word, and “Catch-22” has entered the lexicon.

As to the long-term viability of Heller’s iconic ‘60s satirical anti-war novel—or the film that Mike Nichols made of it in 1970, assembling one of the starriest casts ever—that’s more complicated.

Even more so is Heller’s own stage adaptation, written a year after the movie. Catch-22 the play has generally failed to find traction, and its effectiveness is likely to be a matter of taste. Some (including a large group in the audience at Curio Theatre Company the night I attended) will find its bite undiminished by time. Others will think of it as a historical, well, curio. I confess I’m more in the latter camp than the former.

But first, a word on the company. This remarkable West Philly group has for more than a decade offered imaginatively staged, sometimes redefining productions of worthy plays, acted with uncommon boldness and style. Curio is no secret in the arts community – recently, they won a Barrymore Award for theater education – but they should be better known across the board.

As for the work itself—well, as I said, reactions will likely be highly personal. Heller’s novel is a dizzying tour-de-force of narrative gamesmanship. Even he can’t quite telescope this into a two-hour evening, though paradoxically, Catch-22 the play also feels hyperextended. Heller provides ironic, funny dialogue, and some of the political points in this piece—set during World War II but meant to be metaphoric—remain sharply pertinent. A character quoting Calvin Coolidge’s “the business of America is business” brought forth much sardonic laughter, and the subplot of Officer Milo Minderbinder, a war-time profiteer, feels shockingly apt in the world of our current tragicomic regime.

But Catch-22‘s principal source of resonance—the Vietnam war—no longer carries the same sense of in-the-moment catastrophe, and Heller’s unsubtle absurdism feels creaky. Watching the show, I experienced a familiar heart-tugging feeling that I often get with works that seemed so vibrant and vital five-plus decades ago: that the ’60s indeed is the home to which you can’t go again.

Catch-22 plays through May 19. For more information, visit the Curio Theatre Company website.