REVIEW: Sing the Body Electric at Theatre Exile is a World Lit by Lightning

In Michael Hollinger’s perplexing but enchanting play, getting there is the best part. 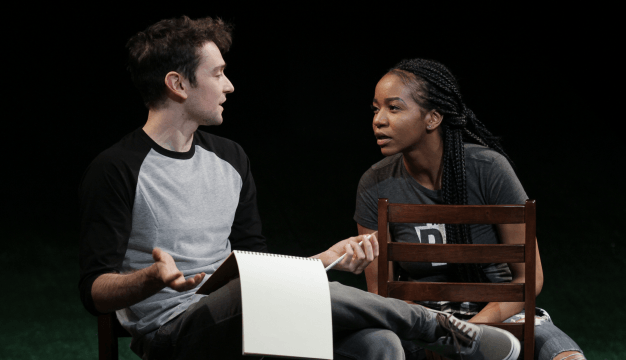 Veteran travelers know that the final destination isn’t always the high point of a trip—sometimes the act of getting there is more interesting, which isn’t necessarily a bad thing.

Theater-goers can experience a similar phenomenon, as I was reminded watching Theatre Exile’s world premiere of Sing the Body Electric, a perplexing but often enchanting play by Michael Hollinger.

From the first minutes—a group therapy session presided over by Doris, a caring counselor (Kimberly S. Fairbanks, in a likable, centered performance)—I was won over by Hollinger’s wonderfully natural sense of small conversations. The interconnected characters of Sing the Body Electric are themselves modest and at least superficially ordinary. They include Doris’s daughter, Jess, an appealingly mouthy high school student (Kishia Nixon, terrific); Lloyd, a local high school teacher, now down on his luck (Tony Lawton, funny, sad, and heartbreaking); and Blake, Lloyd’s high school age son (the excellent Trevor William Fayle), who in the recent past was struck by lightning, significantly altering his life.

Every aspect of director Deborah Block’s fluid, visually striking production feels exactly right. In particular, Nixon and Fayle manage something I’ve rarely seen achieved in the theater—teenage conversation that sounds completely genuine. It’s the writing, of course, that facilitates this, and Hollinger’s ear for speech and easy humor is unerring—the ordinary becomes extraordinary.

So charmed was I by Sing the Body Electric that it was not until roughly an hour into the 90 minute running time that it occurred to me to wonder where it was all going. Now that I’ve been there and back, I must admit I’m still wondering.

Hollinger is too smart to tie everything up neatly. Of course, there will be more to these people than we initially see. A fifth character, bawdy Southern barfly Claire (Mary Lee Bednarek, clearly enjoying herself), who is also in the therapy group, early on reveals her tendency to hook up with physically abusive guys. This seems to prefigure some larger connections and a sense of looming darkness. But it doesn’t feel fully worked-through, and some of the large metaphors about lighting, electricity, and power that clearly hold meaning for Hollinger aren’t sufficiently (you should forgive the expression) grounded.

Don’t let my criticisms deter you from seeing Sing the Body Electric—so much good writing, directing, and acting are reward enough. Just make sure you enjoy the road trip; it will take another iteration of Sing the Body Electric before the final destination of Hollinger’s play is fully illuminated.

Sing the Body Electric plays through May 13. For more information, visit the Theatre Exile website.