Despite ingenious moments, the gimmick of Beth Wohl’s play wears out before it’s over. 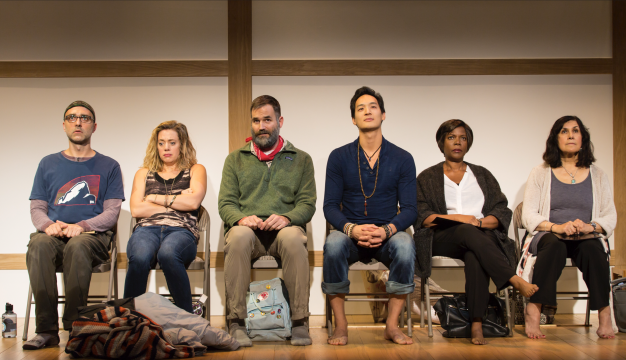 Two observations, both of which will tie into Small Mouth Sounds, Bess Wohl’s ingenious but frustrating play, now on stage at the Philadelphia Theater Company. First — It’s nice to be back in PTC’s home, the Suzanne Roberts Theatre, an ideally proportioned, wonderfully comfortable space.

Second — Decades ago, I attended an introductory session for EST. (In case you were lucky enough to have missed the ‘70s and early ‘80s, or aren’t watching The Americans, I should explain that those initials stand for Erhard Seminar Training). I felt stalled and, like so many, was searching for answers. And this was in Southern California, by the way, where self-realization is a favorite local pastime. Anyway, 15 minutes into the spiel I knew I’d be much more likely to get stuck in the tunnel than find the light at the end of it. But in a sense, that very understanding was itself satisfying — knowing firmly what I didn’t want made me more confident.

In Small Mouth Sounds, we find six people similarly seeking fulfillment. Jan (Connor Barrett), Rodney (Edward Chin-Lyn), Ned (Brad Heberlee), Alicia (Brenna Palughi), Joan (Socorro Santiago), and Judy (Cherene Snow), gather in a small room. Once together, they are addressed over a microphone by a disembodied voice (think Zach in A Chorus Line). The Teacher (as he’s called) calmly and slowly offers instructions that are often elliptical, and occasionally peppered with sarcasm.

And off they go, the six, on a five-day retreat. Did I mention that they’ve agreed not to speak?  There is indeed some dialogue in Small Mouth Sounds, but many of the longest and most intimate scenes are silent. Quiet is this play’s most striking feature, and to the credit of director Rachel Chavkin and her able cast, many touching moments are realized without a word.

But these momentary pleasures aren’t enough. I sense that playwright Wohl wants to satirize self-help cults, while also asking the audience to care about her characters and hope they find what they’re looking for. That would be a tall order even for a play with more dialogue — here, in what feels like a clever idea that’s worn thin long before the final image, it doesn’t cohere. And as pleasant as it is to sit in this lovely theater, it also exacerbates the sense that the audience is merely observing. (Originally, Small Mouth Sounds was done in a large room where it was clear the onlookers were but a step away from the participants.) Good as the actors are, there’s just enough sense of ironic detachment to remind us we’re watching a performance.

Mostly, to me Small Mouth Sounds feels like a hyperextended satire that takes on a too-easy target. We have a favorite phrases in our house: that which “renders satire unnecessary.” I learned recently that there’s a “Deepak Chopra HomeBase” in ABC Carpet, one of Manhattan’s swankiest housewares stores. That strikes me as funnier and sadder than anything in Small Mouth Sounds.