REVIEW: The Bluest Eye — From Page to Stage, Between a Rock and a Hard Place

The Arden’s Toni Morrison adaptation is too much handsome staging, too little Morrison. 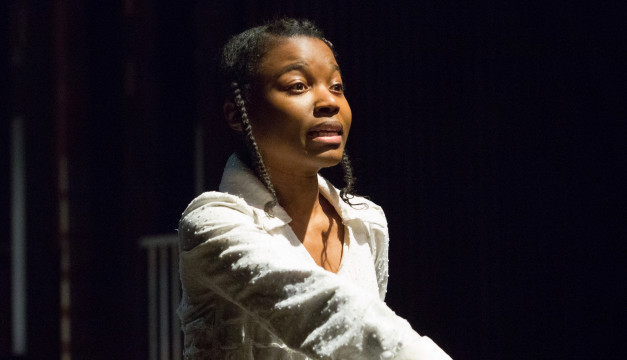 Jasmine Ward as Pecola in The Bluest Eye at Arden Theatre. (Photo by Mark Garvin)

The jump from page to the stage sounds so easy, right? So fluid, so natural. Yet Lydia R. Diamond’s conscientious but reductive stage adaptation of Toni Morrison’s The Bluest Eye — on stage at the Arden in a handsome but tonally off-kilter production by director Raelle Myrick-Hodges — reminds us how difficult it really is. And when that source material is a brilliant novel famous for its unflinching, coruscating power — and the theatrical goal is to appeal to a broad audience — well, that translation quickly gets stuck between a rock and hard place.

The issue is front and center from the beginning. The novel opens with a child’s reading primer, a framing device that Diamond also employs. In fact, throughout she quotes considerable stretches of Morrison’s original text (basically, a good idea).

But Morrison’s primer is only a small part of a densely written — and very clearly adult — novel. Here, that primer, with its sense of naivety and childhood perspective, becomes a dominating motif. We see it in the warm, homey colors of the set and props (including the proverbial red wagon), and in the costumes, which identify some characters with their names embroidered on them. (In the case of others, their costumes identify them abstractly — “Misery” on one woman’s dress, for example; and “Pretty” on another’s.)

More damagingly, the acting style itself treats characters as iconic types, rather than individuals. It doesn’t help that some of them here also serve as narrators, setting up and commenting on action which they themselves are meant to be living. Actresses Nicolette Lynch (as Claudia), and Renika Williams (as Frieda/Darlene) in particular manage this with considerable skill and richness, but it’s still a device that takes us out of the story.

Nowhere is the disconnect between book and adaptation more telling than in depicting the shockingly harsh life of Pecola, which includes sexual assault and mental illness. Jasmine Ward — an appealing actress but clearly an adult — suggests Pecola’s traumas through stylistic, even balletic movements. Surely this is more acceptable to an audience (particularly if that audience includes students — likely here, given the canonical importance of Morrison). But it robs the piece of its brutality and horror, even as the idea of a “stylized” rape makes us queasy.

Given the difficulties, I sometimes wonder if Charles Dickens didn’t have the right idea by literally (in every sense) reading his stories aloud as a performance vehicle. In recent years, Elevator Repair Service (yes, that’s a theater company) had tremendous success with Gatz, their adaptation of The Great Gatsby, which involved an actor reciting the entire novel. You can, in fact, hear Toni Morrison herself reading The Bluest Eye via audiobook. It lasts around seven hours.

This is not to say the Arden’s 100-minute show won’t capture an audience — the reception was very warm the night I saw it, with sighs and laughter at appropriate moments. But to me, it fundamentally isn’t Toni Morrison. Like I said – between a rock and a hard place.