REVIEW: Love, Lies and Taxidermy at Inis Nua is a Rom-Com for Today

Alan Harris’s rollercoaster of a play is a hint of Spring renewal in the depths of February. 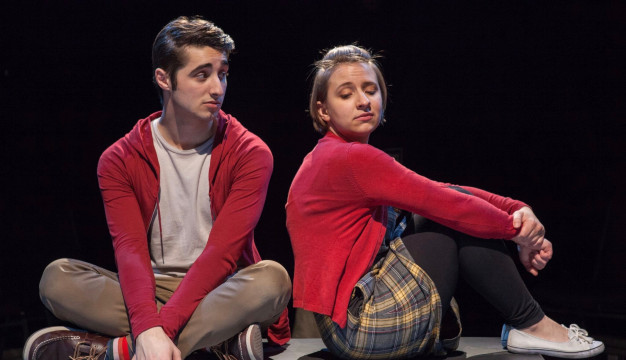 Love, Lies and Taxidermy, Alan Harris’s 90-minute rollercoaster of play, arrives at Inis Nua after director Tom Reing saw a production at the Edinburgh Fringe. This frequent pipeline for Reing and company has been a discovery path for some of their best work, where “Fringe” often is a synonym for “edgy.”

There’s a bit of that here, but the tripartite title can be taken as a summary—we’ll have some tensions and betrayals, and even some quirky-creepiness. Love comes first, though, in this boy meets girl tale. Not for nothing is its young leading man called Valentyn!

That role is played with gobs of charm by Joseph Teti, who—along with his excellent co-stars, Francesca Piccioni and Seth Reichgott—is reason enough to see Love, Lies and Taxidermy. The show is as close to a rom-com as I ever expect to see at Inis Nua, but don’t worry—Reing brings his directorial A-game to the wonderfully fluid staging, and there’s sufficient seriousness to give the show ballast.

In the Welsh town of Merthyr Tydfil, Valentyn, a bashful student, Ash, a local girl he fancies, and their families struggle to hold on to a semblance of security. (In one of Harris’s good metaphors, a recently-built local Tesco store has essentially gutted Ash’s father’s small ice cream truck business.) In this world of socio-economic upheaval, pretty much everybody has to do something they don’t want to in order to make ends meet—a theme which is, by the way, very much Inis Nua on terra firma. We follow the participants through various adventures, serious, comic, and romantic. I think I’ll stop my synopsis there—more details are unnecessary, and it’s more fun to discover them on your own.

Harris’s play is virtuosic and high-energy, packing an astonishing amount of detail in a breathlessly-paced single act. To facilitate this, all three actors play multiple roles. Also, they  sometimes act as narrators—that’s not a favorite device of mine, but it works well in Love, Lies and Taxidermy, and also resonates with a secondary theme: Valentyn’s love of cinema. For the most part, the playwright shuttles us back and forth—across time periods, plotlines, and tone—with tremendous panache and skill.

Personally, I wish there was a bit less sugar and rather more spice, and the finale feels over-orchestrated. But only a curmudgeon could fail to succumb to a show that works so hard to be winning, and delivers so much to enjoy. Put Love, Lies and Taxidermy on your list for a hint of Spring renewal in the depths of February.