But why isn’t there more light and clarity in this moody but muddy work about illuminated manuscripts? 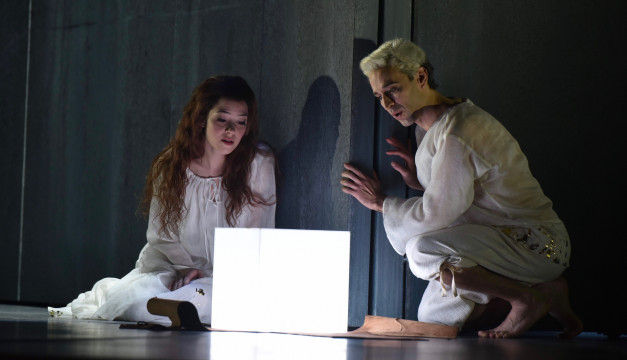 Prima la musica—dopo le parole: first the music, then the words. This famous operatic admonition is good advice for considering Written on Skin. Seen here, the taut 90-minute work scores major points for composer George Benjamin, whose score is unfailingly beautiful and hauntingly individual. It’s superbly delivered by conductor Corrado Rovaris and a tip-top cast, up to every one of its considerable musical challenges. Opera Philadelphia has given it a very striking new production, brimming with mood-evoking theatricality. For these reasons and more, it’s a must see. I wish I felt that the initial pop of the story was fully realized in the libretto… but we’ll save that for later.

Written on Skin is a story-within-a-frame. The central tale involves a medieval wife, Agnès, married to a husband called Protector. It’s an ironic name, to be sure—Agnès is more abused than cared-for. When a young boy is brought into their home to create an illuminated manuscript that celebrates the Protector, a complex triangulated relationship develops.

The lens through which we perceive this is an assemblage of very hip-looking angels, who appear to be contemporary or even from an unidentified period in the future. The angels add a  complementary perspective of distant, almost dispassionate analysis to the fevered historical melodrama. (Try to imagine a mash-up of The Matrix and Francesca da Rimini, and you’ll have sense of the bifocal tone.)

While Benjamin’s vocal writing eschews arias in favor of longer narratives, the vocal writing is virtuosic and rewarding. A lot of it lies very high, and calls for long arcs of pure, straight tone—a challenge met with ease by Lauren Snouffer (Agnès), Mark Stone (Protector), Alasdair Kent (Third Angel/John) and the others. Anthony Roth Costanzo (First Angel/Boy) especially is astonishing, his other-worldly countertenor perfect for the role, to which he also brings a wonderfully ambiguous boyishness with an edge. Benjamin should write a Peter Pan opera for Costanzo, whose acting is also powerful yet wonderfully understated. More broadly, the singers here, under William Kerley’s direction, deliver some of the most compellingly truthful acting I’ve seen in opera. Tom Rogers’ scenery and costumes are a highly effective blend of a contemporary and period—I especially like the way the show moves from gray to lurid pools of color as the emotional stakes increase.

Alas, it’s time for the other galoche to drop.  While Crimp’s libretto is big on portentousness and imagery, it’s  short on clarity. I’m sure there’s a deliberate intent to the combination of ironic distance and visceral shock—everything about Crimp’s work feels calculated for effect—but major areas don’t come together, even by dream-logic standards. What is the relationship between the contemporary frame and the medieval tale at the center? Who specifically are these people, and why are they here? I’m especially perplexed by Marie, Agnès’s sister, who seems largely to stand apart and observe with an air of knowingness. (If this were a film noir, she’d be played by Jane Greer.)  Why do characters describe themselves in the third person? These and other details remain open-ended and unresolved, and even the central metaphor of the illuminated manuscript is, well, unilluminated.

But, again—prima la musica. If  you go with that in mind, you’ll find much to enjoy.

Written on Skin has performances through February 18. For more information, visit the Opera Philadelphia website.