Review: Waiting for Godot at Quintessence Melds Humor and Humanity 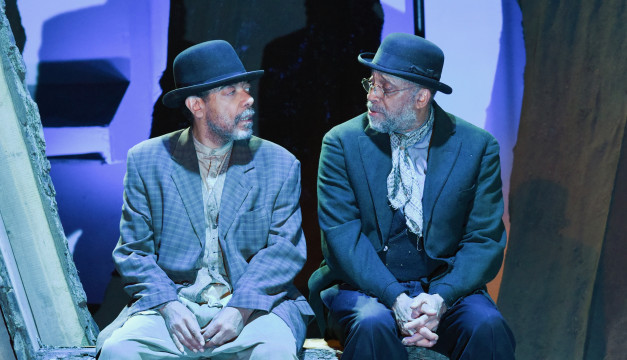 Frank X and Johnnie Hobbs, Jr. in Waiting for Godot at Quintessence. (Photo by Shawn May)

Is it the exceptional imagination of this production, or the scary instability of our current world? Probably both. The upshot is that Waiting for Godot, a play whose brilliance and humor I thought I knew, now seems freshly-minted in director Ken Marini’s extraordinary production at Quintessence Theatre Group. In particular, it feels more emotionally overwhelming than I’ve ever seen.

Don’t get me wrong—the playful clowning is still here, as Estragon, also known as Gogo (Frank X) and Vladimir, called Didi (Johnnie Hobbs, Jr.) bide their time waiting for the arrival of a mysterious stranger.  These two marvelous actors are, individually and especially together, at the peak of their game, including pointed banter executed with fencing-like precision, and even snazzy song-and-dance.

Yet from the first moment, there’s an unexpected sense of gravitas. Hobbs and X look careworn, older, more destitute than we expect—less like vaudeville hobos than homeless men. There’s a distinctively depression-era look and feel to this Godot, visible in large and small ways, including a visiting boy (delightfully played by Lyam David-Kilker) who seems straight out of an Our Gang comedy.  (Is it my imagination, or do the gnarled textures of James F. Pyne Jr.’s abstract panels evoke trees painted by Thomas Hart Benton?) One specific reference really brings the point home—a line suggesting Didi and Gogo once picked fruit in Macon Country, France, here becomes the Napa Valley, transporting us to the world of Steinbeck’s Grapes of Wrath.

All of this makes the story almost unbearably poignant, sharpened particularly by Hobbs’ low-key sweetness (his Didi really seems the moral center of the play), and the sense of painful effort behind X’s eloquent courtliness. It’s nearly unbearable to watch the dehumanization of Lucky (an amazing performance by J. Hernandez, by turns wrenchingly naturalistic, and thrillingly virtuosic).

Though much here is revelatory, there are a few drawbacks. Gregory Isaacs is a charming actor, but his debonair Pozzo softens some of the needed harshness. The tempo of the show sometimes lags—there too many long pauses paradoxically reduce the effectiveness of the ones that really need to be there.

But those are minor quibbles about a production that should be seen by all Philadelphia theater fans—especially those who think they know what Waiting for Godot is about. I’m betting they will feel—as I did—that they are discovering something new and deeply moving.

One particular moment among many sticks in my mind now, hours later. In Act II, Estragon discovers that the pair of worn old boots he discarded because they pinched his feet have mysteriously become too big. The ever-helpful Vladimir suggests a bright side. “Perhaps you’ll have socks someday,” he says. The line often gets a laugh, and it did here, too. But I also thought it was the saddest thing I ever heard.