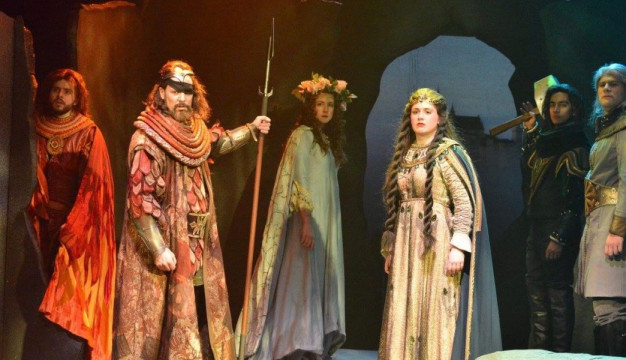 Das Rheingold at the Academy of Vocal Arts. (Photo by Paul Sirochman)

In theory, it seemed a curious concept, to say the least—Wagner’s Das Rheingold at the Academy of Vocal Arts, accompanied by piano. Few opera scores are more celebrated for orchestral textures, starting with the double-basses, bassoons, horns, rippling strings and more that gorgeously introduce the Rhine and its daughters. Then too, the story is a mythical epic, calling for spectacular special effects that have defeated many high-budget productions.

How would this work? Try to imagine a chamber-size Game of Thrones, and you’ll have some idea why I was skeptical. I had expected that AVA would choose an abstract, metaphorical, streamlined production style —but raising the bar still further, they opted for something more literal and grandeur.

That it turns out to be so impressive and pleasurable for audiences was a delightful surprise.

Almost immediately, I saw the wisdom in the project, which allows singers to develop Wagnerian narrative style without having to push. And if the lone pianist(!)—Luke Housner—couldn’t replicate a full orchestra, he was astonishingly effective and unflagging in lending shape and color to the marathon evening (2 hours and 25 minutes in a single act). Housner surely deserves the company’s MVP award.

From the entrance of the Rhinemaidens, this staging recalled photographs I’ve seen of some very early Wagner productions—almost a sense of fairytale, which is a fairly effective approach here. If at times we smiled at the small-scale attempts to capture large-format actions… well, there’s charm in that, too. 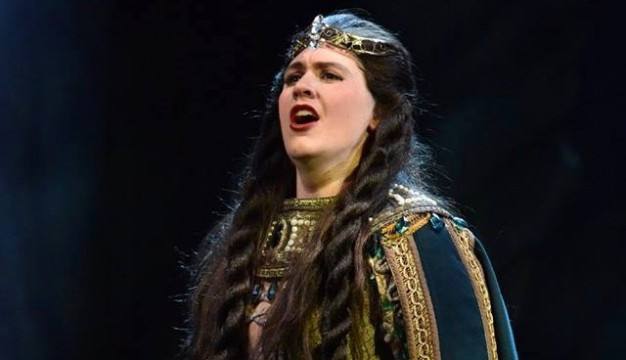 Hannah Ludwig as Fricka in Das Rheingold at the Academy of Vocal Arts. (Photo by Paul Sirochman)

It’s the AVA singers—as it should be—who dominated the evening. Pride of place goes to Hannah Ludwig, a sonorous, powerful Fricka, whose strikingly colored mezzo is evenly calibrated throughout a wide range; this is truly a star voice. Ludwig also acts well, making much of the words. As Alberich, baritone Timothy Renner has similar virtues—a shining, well-produced baritone, with good stage presence and a fine sense of musical and dramatic line. Ludwig and Renner are very much Valhalla-ready.

Close to their level is Alexandra Nowakowski, whose silvery soprano dispatches Freia’s difficult vocal lines with ease. Piotr Buszewski (Loge) skillfully pointed the narratives, though his tone was not always dulcet. (It’s an odd role, sung sometimes by leading-men and others by character tenors.)  Meryl Dominguez, Alexandra Raskazoff, and Pascale Spinney are a lovely, vocally effulgent trio of Rhinemaidens. Gabriela Flores has an elegant, authoritative presence as Erda, though the voice is on the light side for this contralto role.

The performance I saw had Nathan Milholin as Wotan (he alternates with Ben Wager). The King of the Gods is a vocal and dramatic stretch for even the most experienced bass-baritones—Milholin brought gravitas and a strong instrument, especially in the upper register, though there was a certain monotony in his approach.

AVA is delivering some very strong work this year, with Strauss’s Ariadne auf Naxos, Verdi’s La Traviata, and recital and concert evenings yet to come. Meanwhile, there are still a couple or remaining Rheingold performances, and I recommend them. It may not be a perfect evening, but there’s certainly vocal gold to be found in this Rhine.

Das Rheingold has performance through Jan. 30. For more information, visit the Academy of Vocal Arts website.