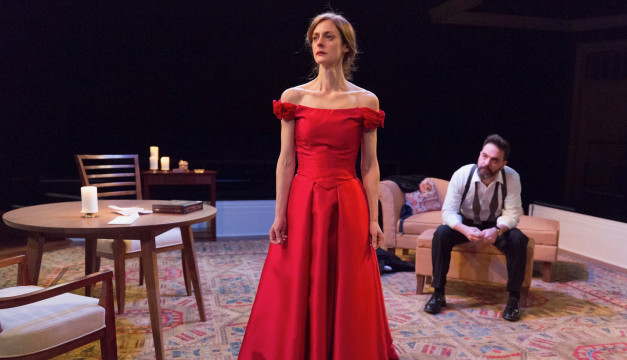 Meet Nora Helmer, the original fjord maverick. Tonight, she learns a life-altering truth: Any woman who depends on a man—to take the high road, to appreciate the sacrifices she has made, to put her needs before his own—is on a fool’s errand. The extraordinary way she handles it will change everything.

Did I mention all this happens in Henrik Ibsen’s A Doll’s House, which premiered in 1879? But if you expect it to feel dated, just wait till you see the riveting final scene in Arden Theatre’s sleek production. You can hear a pin drop. The play (I’m sorry to say) feels timelier than ever.

No doubt some of the resonance is sharpened by daily headlines that force us to acknowledge how far we are even now from gender equality. But most of the power here is straight outta  Ibsen, whose bold, harsh sense of life and profound understanding of the human psyche—flaws and all—remains razor-sharp 139 years later.

Credit, too, to director Terrence J. Nolen and the cast, who deliver a production that cannily blends traditional and contemporary elements. Staged in the round (a wonderfully effective configuration for their Arcadia Stage—use it more often, please!) with a minimal set, and using Simon Stephens’ un-frilly, cut-to-the-chase translation, we might be in Norway in the 19th Century… or a Danish-modern living room, circa 1960.

Likewise, the striking costumes meld time periods. Anna (Joilet Harris, lovely and warm), the nanny, and visiting friend Dr. Rank (a suave, charismatic Scott Greer), wear period clothes, while Torvald (Cody Nickell’s, appropriately preening and annoying), Nora’s husband, is coiffed and bearded like a Brooklyn hipster. As for Nora herself—played here by the movie-star chic Katharine Powell—she has several spectacular gowns, including a black-and-green ensemble that could be straight out of Douglas Sirk.

Sirk, the maestro of 1950s melodrama-on-film, is an interesting touchstone for this A Doll’s House.  One of the very effective ways it feels contemporary is the palpable sense of sexual attraction—we see it early in Act I, where nine years into their marriage, a spark still burns between Nora and Torvald. Their scene at the beginning of Act III, coming home tired and a little drunk from a party, feels very real. For me, the real revelation here is the famous scene between Nora and Rank, where her shifts from coquettishness to prudery register more palpably than I’ve ever seen before. Also, as Krogstad, who is often made out to be the villain of the piece, the excellent Akeem Davis gives an uncommonly compelling performance.

There are benefits to streamlining A Doll’s House, but along with sweeping away the cobwebs and hokum, there are some costs, too. Here, some of the plot points and reversals of fortune don’t register as sharply as they could. More centrally, I think Ibsen meant us to see Nora initially as a child—not so much selfish as clueless. In Powell’s skillful but sometimes arch portrayal, she seems brittle and condescending. (Initially, I thought I might be watching The Real Housewives of Oslo.) This may be a more understandable take for today’s audience, but I think it makes her less sympathetic than she’s meant to be. Frankly, I also favor no tears in the final scene, where for the first time, Nora is in control of her own life.

But these are minor quibbles in show that powerfully delivers a message we all—still—need to learn. Even now, 10 hours after the show, I can hear that door slamming shut.