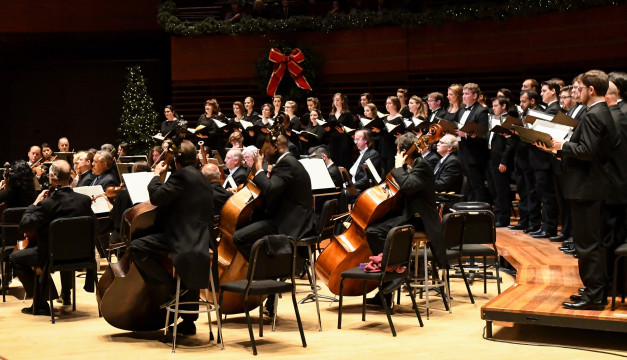 Handel’s Messiah, like the God it so gloriously celebrates, contains multitudes. The composer himself wrote alternative versions of some of the numbers and assigned them to different voices, and the work has been assembled and reassembled in various configurations. Evolving history, changing tastes, and specific circumstances are also part of it. Victorians and Edwardians in particular favored a cast of thousands and maximum lugubriousness. Today’s Messiah performances are often jauntier than that; the forces large or small, as available.

During the lead-up to Christmas, the work is a Philadelphia Orchestra staple—and here too, year-to-year, the styles change. This time, we had a middle-of-the-road stylistic approach. The orchestra (conducted by Cristian Macelaru) and the excellent Philadelphia Symphonic Choir (directed by Joe Miller) were on the larger side—about 50 singers, if I counted correctly. The sound was consistently beautiful and blended. Though some tempos were faster than traditional, there was considerable variation in both speeds and dynamics.

Yet somehow, it didn’t quite add up to cohesive, overwhelming statement. Longer-than-necessary pauses between numbers broke the dramatic arc. Each soloist seemed to working in isolation. Tenor Nicholas Phan delivered soft, tapered opening phrases, but struggled with the florid and declamatory sections. Declamation was baritone Mark Stone’s strong suit—each word clearly etched, with a real sense of presence and attack. Soprano Ekaterina Siurina’s heavily-accented delivery of the text was not always comprehensible, but it’s an exceptionally beautiful sound, and her style and line are impeccable—even when individual words didn’t register, the musical meaning was clear. Jamie Barton was more restrained than I expected—she was at her best in “He was despised,” and throughout her lower range hinted at the awesome power she can deliver in opera. But I wish she’d let it out more. In fact, for me, this entire Messiah could be more operatic.

Still, there were marvelous moments throughout. Siurina made something exquisite of “How beautiful are the feet of them,” a piece that rarely feels so integral. Stone delivered a knock-out “The trumpet shall sound,” immeasurably aided by trumpeter David Bilger, who was also brilliant in the obbligato in “Hallelujah.” And Macelaru and the chorus saved the best for last—a “Worthy is the Lamb” that started slowly and softly, building momentum to a ringing finale.

To which I can only add—it’s Messiah time once again: Amen.

Messiah is performed at the Philadelphia Orchestra on December 21 and 22. For more information visit the website.