REVIEW: Making Your Family into Art in Azuka’s The Gap

Is Emma Goidel's play theater or therapy? You’ll need to judge for yourselves. 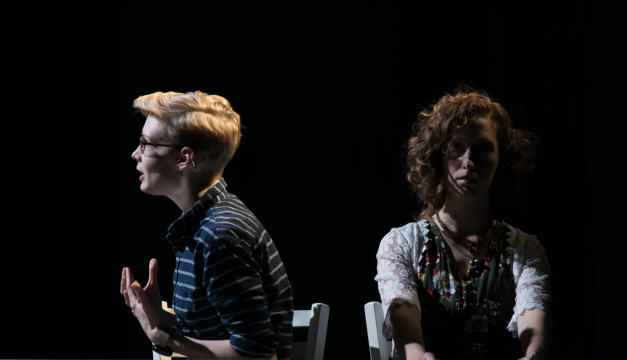 Maggie Johnson and Alice Yorke in THE GAP at Azuka Theater. (Photo by Johanna Austin)

Have you ever taken a trip where the journey seemed to promise one kind of experience, but the destination was quite different? That’s how I felt watching The Gap, a world-premiere at Azuka Theatre. Emma Goidel’s play is an exceptionally well-crafted piece, beautifully done at Azuka (the five-actor cast should be a sure thing for a Barrymore ensemble nomination). It’s bound to be provocative, and leave audiences eager to ponder it further.

My first problem as a critic is that I don’t know how much more I should say. The Gap is full of twists-and-turns, and most of them should come as a surprise—that final destination should, for sure! I’m on safer ground with the early set-up, but I need to proceed cautiously.

Here goes… a performance artist (Maggie Johnson, translucent and wonderful in a tough role) is in the process of creating on a piece about her family—in particular, her relationship with her sister (Alice Yorke, also excellent). This is rocky terrain—for the play’s artist, and for Goidel as well—but also fascinating, as we watch the layers of life, art, and life-translated-to-art simultaneously merge and veer apart. Ciera Gardner, Jamie Masada, and Geneviève Perrier complete the fine cast; director Rebecca Wright’s fluid production uses white panels to suggest the gauzy, ever-evolving world of memory.

Much of this is treated as a dry comedy, with lots of intentionally awkward pauses and dead-pan delivery. (I thought of early Jim Jarmusch films, which I mean as a compliment.) It’s also deliberately hard to figure out the details. But I can promise you that Goidel, who has a masterful sense of structure, will put it all together.

It’s how it comes together where things get tricky. Since the theater posts trigger warnings, I can say that The Gap deals with PTSD and recovery from emotional trauma. The tone shifts markedly, and by the end, I felt immersed in something very deeply personal.

That’s an awkward situation for a critic, but since that’s what I’m here to do… I found The Gap more effective in parts than as a whole. The move from sardonic, edgy comedy into something darker feels forced (and frankly, almost takes the audience hostage). Sometimes Goidel skewers New Age practices; at other points, she seems enmeshed in them.

As I said, it’s a journey. Your idea of a satisfying one may be different from mine. For me, The Gap is an awkward mix of theater and therapy, but you should judge it for yourselves.