REVIEW: The Wilma’s Blood Wedding Is A Marriage of Compromises 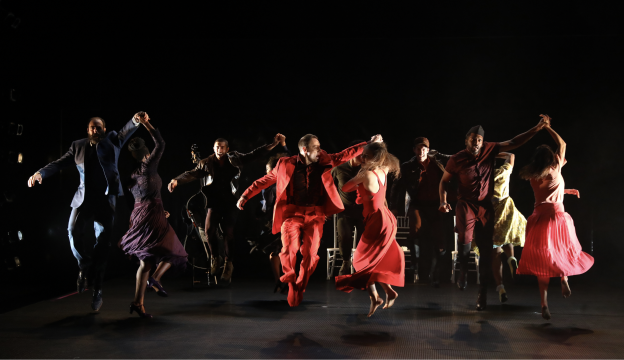 The Ensemble of Blood Wedding at the Wilma Theater. (Photo by Bill Hebert)

Before getting into the thicket that is the Wilma’s spectacularly beautiful, dramatically frustrating Blood Wedding, I should fess up—I’m not convinced that Garcia Lorca’s plays can be translated in a way that works for a contemporary audience.

I don’t mean “translate” in the literal sense, although the English language adaptations I know often founder on the playwright’s overwrought emotionality. (To this day, I remember the line, “May the pain of the crucifying nail strike you in the eye!” from a version of House of Bernarda Alba that I read in college. It gave me the giggles.) But everything about Lorca’s work feels overwrought, part of a world far more distant than it actually is (he was murdered in 1936).

Director Csaba Horváth ingeniously works around the problem by reorienting the script. Even before the first scene, we are introduced to the Wilma’s Hothouse Ensemble—eleven committed actors who work themselves into a fevered pitch of singing, dancing, and stomping. Visually, it’s a stunning opening that also serves notice—this Blood Wedding is as much a laboratory for Wilma’s movement-intensive style as it is a production of the play.

Maybe more. Horváth’s interpretation is so entirely shaped around the Hothouse that key elements of Lorca’s Blood Wedding vanish completely. It’s a difficult play to describe—a macabre symbolist exploration of love and violence—but for starters, I’d say it’s deeply Spanish. (Lorca thought so—he conceived it as part of a “Trilogy of the Spanish Earth”). Yet here, it’s scrubbed of any specific sense of place or time.

Conversations are deliberately staged in a way to avoid any sense of natural interaction, and much of the dialogue is intoned very slowly and portentously—we might be listening to a church service.  The dance interludes generate their own excitement, but disrupt the play’s internal rhythms and suspense; and the highly choreographed style means individual characters don’t register as specifically as they should. Among the group, Sarah Gliko and Lindsay Smiling fare best; not coincidentally, they also sound like they’re actually talking to each other.

Still, I was initially hooked by the overall panache. But around halfway through the intermission-less, nearly two-hour show, I got the sinking feeling I’d seen pretty much everything Horváth and the ensemble had to offer. And quite a bit before then, I’d lost interest in their arch, postured reading of the play.  It’s a bit like Humpty Dumpty—having deconstructed Blood Wedding into dozens of exquisite fragments, they were unable to make it whole again.