In Theatre Exile’s Ideation, Consultants Pitching for their Lives 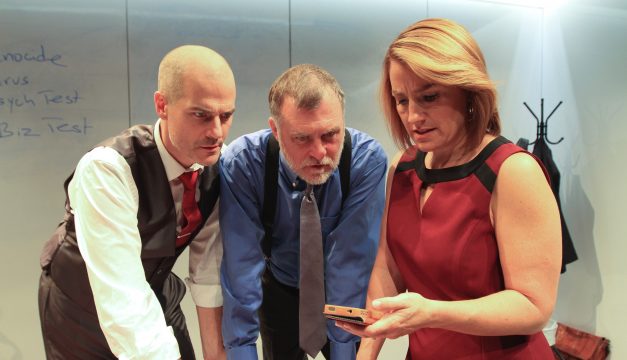 Moving is a traumatic experience, but it can bring a positive outcome. Theatre Exile, whose home theater will soon be rebuilt from scratch, is temporarily using the Latvian Society as their performance space. To judge from Ideation, it’s a comfortable fit.  A fine cast, sleekly directed by Joe Canuso, show the company in near-top form, doing the kind of hyper-realism they do best.

At least, it initially looks like realism. In a soul-less conference room, five employees gather. They range in gender (one woman, Hannah, played by the excellent D’Arcy Dersham—four guys), and seniority (Hannah’s at the top, intern Scooter at the bottom, and the rest in-between). Initially, there’s a lot of squabbling about rank, etc.—the kind of stuff that makes people who avoided the corporate world congratulate themselves on their good judgment.

But there’s more. “Ideation” is a highfalutin term for what used to be called pitching—workers together tossing out ideas with the ultimate goal of a coherent business proposal. The gang here have 90 minutes to put something together for a demanding boss, whom we only hear as a call-in voice. And the actual nature of the project? Well, that’s the center and secret of Ideation.

Playwright Aaron Loeb orchestrates everything skillfully. He embeds key details within bursts of dialogue so we’re taken by surprise, and finds interesting ways to move characters in and out of the scene, creating groups-within-groups. I found the first half of Ideation thoroughly entertaining, and well-acted across the board—in addition to Dersham, the cast includes Allen Radway, William Zielinski, Alex Hughes, and Harry Watermeier. (Radway in particular impresses—playing Brock, an archetypal executive jerk, his charisma goes far towards making  the character palatable.)

But as Ideation goes on, it becomes more implausible, and the sense of a looming deadline dissipates (the 90 minutes the group has to accomplish a pitch turns into more like 100, and the show would be stronger if 10 minutes shorter). Ultimately, Loeb seems to want to piece to be two things at once—a nightmarish but realistic workplace cautionary tale (think Glengarry Glen Ross) and an over-the-top, darkly paranoid satire (along the lines of Dr. Strangelove).

Personally, I think it’s more successful as the former, as in my favorite moment—a small, wordless detail near the very beginning. Hannah has chided Scooter for not setting up the room properly. He bows his head, but doesn’t actually fix it. Instead, she silently puts pens and pads at each desk, and tidies up.  Woman’s work is woman’s work, after all—even for a muckety-muck. This is corporate culture at its most awful and unchanging.