The emphasis on louche sexual openness, meant to shock the audience, instead makes this production feel less dangerous. 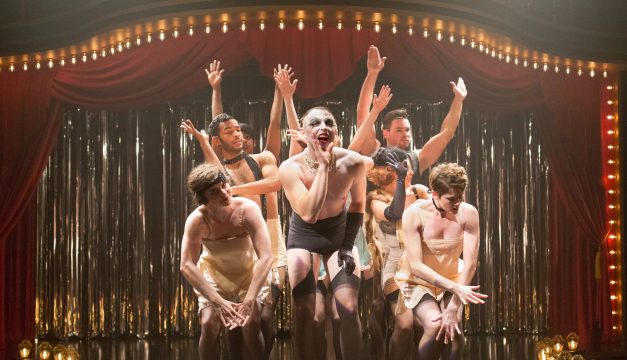 John Jarboe and the ensemble in CABARET at the Arden Theatre. (Photo by Mark Garvin)

Wilkommen back, Cabaret… though it seems you were only just here. Indeed, it’s been less than six months since the last tour docked briefly at the Academy of Music. The Arden’s version is in some ways better than that one, and less good in others. But for the most part, it founders on the same problem—it’s a Cabaret designed to shock with its louche sexual openness, but which instead paradoxically seems less dangerous.

I doubt anyone needs a synopsis of the show, but it may help to understand that subsequent versions of the 1967 Harold Prince-directed musical about Berlin in 1931 on the brink of the Nazi rise to power have substantially altered the original script, score, and concept.

Bob Fosse’s movie made many changes, ditched an important subplot, and beefed up the role of Sally Bowles to suit Liza Minnelli. Sam Mendes’ London production in 1993 likewise fiddled with the book and songs (adding some from the movie, taking out others from the stage version). It also aggressively amped up the grunge. It was at this point that Cabaret started to feel like it was less about Nazis and more about nipples and garter belts.

That’s certainly the case at the Arden. John Jarboe, who should be a near-ideal Emcee but here isn’t quite, has more costumes than I could count (including a couple of gowns that I’d swear I last saw on Linda Evans in Dynasty), but what the audience will remember is expanses of skin and stockings. The Mendes version is used (as it also was on the recent tour), and I think it’s far less nuanced and interesting than the original.

It’s frustrating, because director Matt Decker’s production has some real strengths. The Arden is an ideally intimate venue for the show, and the scenic design is terrific. The on-stage orchestra and conductor Alex Bechtel are excellent. Several numbers are exceptionally well delivered—“Don’t Tell Mama,”especially. Charissa Hogeland captures the essence of Sally Bowles as not a rising star, but a personality kid who survives on sheer grit. Christopher Patrick Mullen is memorably unnerving as Ernst, contributing a sense of grim desperation that I wish was more consistently present in the show.

And Jarboe himself has great moments—especially when he’s quietly observing the action, and we’re taken by surprise by his unearthly, androgynous beauty. He has a lovely voice, too, shown to best advantage in “I Don’t Care Much,” though unfortunately the song (another insertion not in the original) steals focus from the scene. But too often, Jarboe engages in frame-breaking, mood-killing byplay, adlibbing chattily with the audience. The opening night crowd ate it up, but I found it consistently undercutting the show.

What Harold Prince got so right in the original is the sense that the real Berlin Cabarets weren’t crack dens or raves—they were middle-class establishments for middle-class audiences, who enjoyed the suggestion of sexual experimentation, but within boundaries—implicit, not explicit. That’s why the first version carries such a punch—it’s not outliers who join ultimately support the Nazis and propel them into power. It’s ordinary, “genteel” folks.

And that’s the necessary irony of Cabaret that’s missing here—the more respectable it looks, the scarier it is.