THEATER REVIEW: In Lantern Theater’s Red Velvet, An Othello Too Real For His Audience 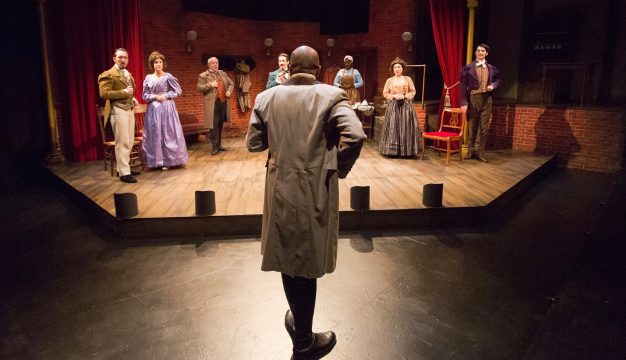 The Cast of Red Velvet at Lantern Theater. (Photo by Mark Garvin)

There is, indeed, red velvet—gold fringe, too. They take the form of a swag valance that frames the proscenium, implying a sense of theatrical tradition and grandeur. When the marvelous Forrest McClendon, playing 19th Century American actor Ira Aldridge, takes hold of the stage, that grandeur is thrillingly fulfilled. Elsewhere, Lolita Chakrabarti’s biographical play, an enjoyable but awkward mix of trenchant character study and trivial backstage farce, is hit-and-miss.

Aldridge’s story is certainly theatrical, and it is to Chakrabarti’s credit that she wrote a play about him.  An African-American actor with special gifts for Shakespeare, he found greater favor in Europe than in his homeland, where opportunities were nil. Aldridge’s London engagement as Othello should have been the highpoint of his career, but as Red Velvet dramatizes, it was a heartbreaker. While audiences were entranced by the actor’s vivid naturalism, critics were dismissive, writing appallingly-coded reviews of his performance that barely masked their horror at seeing a black man on stage touching a white woman.

The best scene by far shows the cast reading those reviews. I assume Chakrabarti is mostly quoting the historical criticism, but whether it’s real or her invention, the effect is devastating. Watching the actors—especially Aldridge—as the words sink in is almost too much to bear.

If only Red Velvet stayed in this mode. But much of the first act involves watching Aldridge working out his Othello with a British cast, and here Chakrabarti’s writing mines stale tropes about actors (vanity, rivalries, grudges) that we’ve seen in everything from The Dresser to Noises Off. Is it the script or director Peter DeLaurier who imposes the arch, silly “look-at-me-I’m-acting” gestures on the Othello scenes? Probably a mix of both, but it’s unfortunate—Aldridge was appearing with the highly-acclaimed Edmund Kean company, who surely would have been better than this. If Red Velvet took them more seriously, it would substantially raise the stakes.

In general, the ensemble roles are mostly “types.” A good cast here does what they can—David Pica is especially droll and delightful, and Liz Filios is lovely as Aldridge’s first wife (she and a couple of others play multiple roles). But it’s an uphill battle, and wearing silly hats and wigs, the group often looks more like a Dickens’ scene in a Fortnum and Mason Christmas window.

But keep your eyes on McClendon, and everything comes into focus. He’s not just a good, even great actor—he’s a fascinating and continually surprising one. He manages to simultaneously suggest a historical character and a modern one, which underscores Red Velvet’s ultimate, crushing point—more than 150 years after Aldridge, our theater is still grappling—often unsuccessfully—with racial politics and casting.