THEATER REVIEW: In Fun Home, The Days and Days that Make Up Our Lives

This extraordinary musical has virtuosity to spare—but what really shines is its humanity. 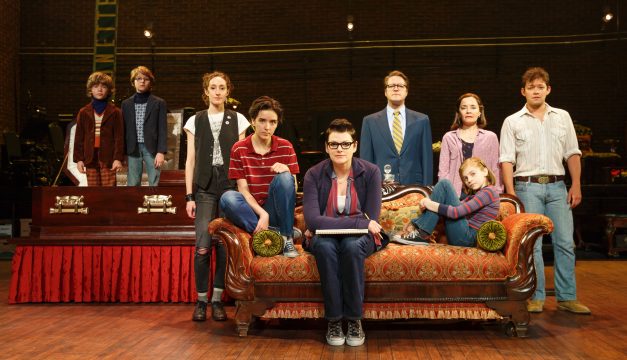 The Cast of Fun Home at the Forrest Theatre. (Photo by Joan Marcus)

A day or two ago, a savvy theater friend and I were debriefing about the Tony Awards. While we both agreed there was plenty to criticize, he made the sage point that the last three winners of Best Musical are an impressive study in the evolution of that form. The first of the them, now on stage at the Forrest Theatre, is Fun Home, with music by Jeanine Tesori, and book and lyrics by Lisa Kron. (The others are, of course, Hamilton, and Dear Evan Hanson, and they can be expected in Philly in due course.)

At first glance, Fun Home might seem the most conventional of the three, dealing as it does with a favorite theme in American theater: the dysfunctional family from which a child arises—successful, if not unscathed—to tell about it. Within minutes, though, you’ll find there’s nothing routine about this altogether extraordinary musical that’s likely to turn you into an emotional puddle.

Tesori and Kron have adapted Alison Bechdel’s memoir; she’s described here as a cartoonist, but Bechdel’s graphic novels—full of mordent wit and powerful ideas about gender roles and sexual orientation—far transcend the genre. Fun Home shows Bechdel herself, grappling to understand and translate, through her writing and drawing, the process of growing up.

It was complicated, indeed. As Alison came to understand her own sexuality, she also learned that her father (Bruce, played her by Robert Petkoff) was gay, and basically leading an open-secret double-life, while her long-suffering mother (Helen, played by Susan Moniz) watched from the sidelines. Briefly, Bechdel hoped that she and her father might find common ground in their outsider-ness, but it was not to be. 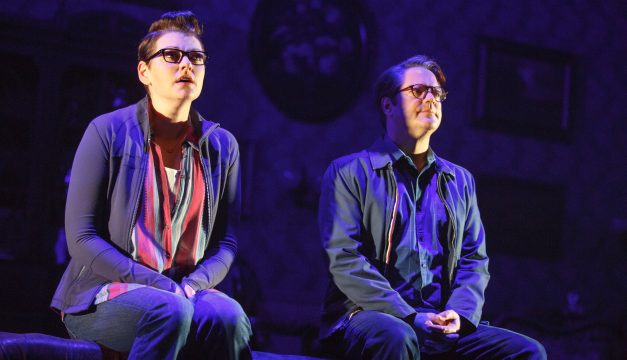 Kate Shindle and Robert Petkoff in Fun Home at the Forrest Theatre. (Photo by Joan Marcus)

In this strange, sometimes even macabre story (the Bechdel family business is a funeral home), Tesori and Kron find remarkable beauty, humor, and even hope. The narrative shuttles cleverly across time and place, and it’s a particularly brilliant device to have Alison—whose story covers decades—played by three different actors: Small Alison is Carly Gold; Medium Alison is Abby Corrigan (sensational—surely, we’ll be hearing much more from her); and Alison the adult is Kate Shindle. In lesser hands, this could be confusing, but here it’s revelatory—a representation that children are different people at different life stages, and nowhere more so than how they related to their parents.

Tesori and Kron’s score—one of the loveliest and most lyrical in recent memory—marks the important moments with some terrific songs, ranging from funny/touching (“Ring of Keys” and “Changing My Major,” wherein the two younger Alisons explore their sexuality) to heartstoppingly poignant (Helen’s “Days and Days” belongs among the great theater ballads of any era).

Fun Home has virtuosity to spare, but what really shines through is its compassionate humanity. Bechdel’s story is unusual—yet, its resonance is universal. But don’t take my word for it—experience Fun Home for yourselves. You will likely leave feeling better about life than when you went in—and in our current moment, what could be more valuable than that?