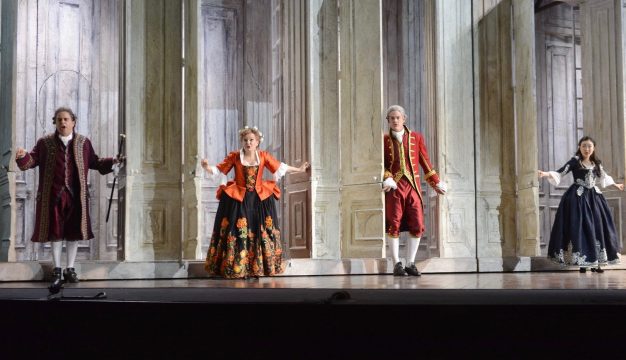 Some days, I think the Act II finale of Le Nozze di Figaro is not only the greatest 20 minutes of music ever written, but also the greatest theater. I’m hardly a lone voice here—if there’s universal agreement about anything operatic, it could be that Mozart’s setting of Beaumarchais’ play is as close to perfect as art gets. And at 231 years old, it’s fresher, sassier, and more dazzling than ever.

What’s more controversial is how to do it. Is the emphasis comedic, or sentimental?… or, for that matter, politically pointed and angry? Should Figaro productions retain its 18th Century setting, or update it?  And we haven’t even touched on questions of musical style (Fast or Slow? To ornament, or not to ornament?). So, you see, there isn’t only one Figaro—there are many, and it’s reborn in each performance.

Opera Philadelphia’s new production, shared with several other regional companies, has many virtues, starting (as it should) with conductor Corrado Rovaris and the orchestra. The approach here is brisk but also delicate, with some unexpected and lovely touches of rubato. Occasionally a tempo seemed too fast (the Countess’s “Dove sono;” also, the letter duet), and I wished for a bit more oomph from the brass and timpani. But bless Rovaris for keeping the recitatives so integrated into the fabric—I’ve rarely heard the score flow so cogently in live performance.

I expect that we also have Rovaris to thank for the emphasis on legato—even in passages that traditionally involve hectoring or pecking, there was a wonderful sense of true singing. This cast is strong from top to bottom; also, unusually young and attractive. Soprano Ying Fang (Susanna) especially shone for her charming presence and the crystalline sheen of her soprano. Other Susannas have made more of the words, and brought more warmth to the role, but Fang’s perfect vocal placement and exquisite poise were a joy.

Brandon Cedel is a dramatically lively Figaro, whose vibrant bass was nicely differentiated from the lighter, more patrician baritone of John Chest (Count Almaviva)—Chest navigated the tricky end of his aria with real élan. Layla Claire sang the Countess with distinction, and acted the part with more far more detail—and more humor—than usual. The rest were all good, including Ashley Milanese (an Opera Philadelphia Emerging Artist), who sparkled in the small role of Barbarina. 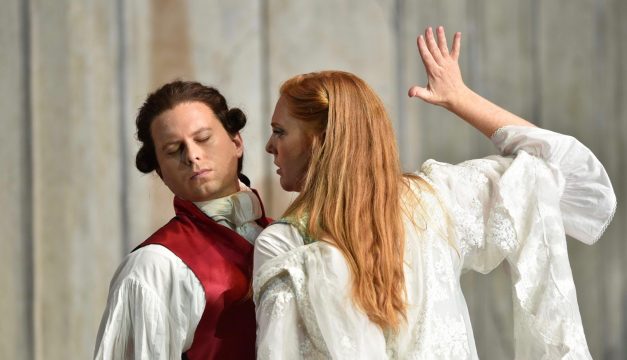 Visually, this Figaro also scores points, with beautiful scenery, lighting, and costumes (it keeps the period setting, which is my preference—the historical details work best that way).  I particularly liked the opening image, a stone wall with sculpted portraits presumably of older members of the House of Almaviva—gray eminences, indeed. (I do miss the garden setting for Act IV, though—the metaphoric substitute here lacks magic.)  Directorially, the fluent staging includes a number of good ideas and a few bad ones. Comedy—occasionally too broad for me—ruled the day (the recurring motif of opening and closing doors evoked a French farce), at least till the unusually aggressive wedding dance brought the important sense of social discord to the fore. The seamless transition from Act I to Act II was wonderfully poignant.

But as I say—there are many, many ways to do Figaro, and in most of the important, and especially the musical ones, Opera Philadelphia’s production delivered on a very high level. A fine conclusion to their most ambitious and interesting season in memory.

Le Nozze di Figaro performances continue at the Academy of Music through May 7. For more information, visit the Opera Philadelphia website.