THEATER REVIEW: Hedwig, Both Lost and Found in Translation

This amped-up version has its own rewards—especially in the marvelous Euan Morton. 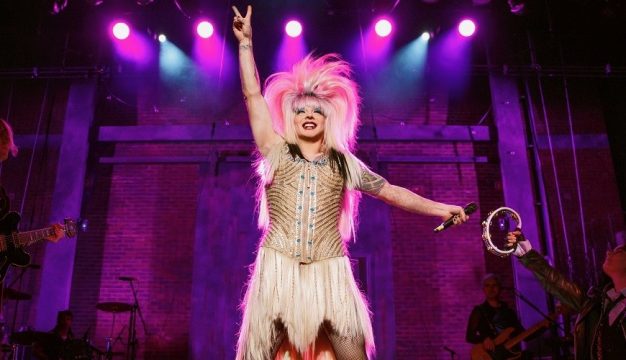 Euan Morton is Hedwig in Hedwig and the Angry Inch at the Forrest Theatre.

Cut to the chase: Hedwig and the Angry Inch is here at the Forrest for only a few days, it’s a terrific show, and you should go. If you’ve seen it before—but not this production or its current star, Euan Morton—see it again.

I was thrilled and also a little surprised, and not because I don’t love the show. Quite the contrary—I saw Hedwig twice in its original incarnation at the Jane Street Theatre in Greenwich Village, and both times were extraordinary. I adore the piece, a quirky, funny, but very profound two-character rock musical about a fragile East German-born transgender performer tenaciously trying to make her way.

That first production was mounted in the faded ballroom of a seedy hotel, which felt almost haunted. (In fact, survivors of the Titanic—the actual ship, not the movie—had been brought there when they arrived in New York.) I saw two different Hedwigs: the elfin John Cameron Mitchell (he, with composer/lyricist Stephen Trask, also wrote the show), and the droll Michael Cerveris. They were equally sensational in their very different ways.

Precisely because these early experiences are so meaningful to me, I avoided the big Hedwig revival that arrived a decade and a half later. I couldn’t imagine this fundamentally off-center story housed in a Broadway theatre—or starring the bright-and-shiny Neil Patrick Harris. So, catching up with the tour (based on that production) turned out to be a happy surprise.

The book has been cleverly tweaked to contextualize the larger, more opulent circumstances—and it works superbly at Philly’s gorgeous and under-used Forrest Theatre. The band is terrific, as is Hannah Corneau, playing Yitzhak, who is Ying to Hedwig’s Yang (or maybe it’s the other way around).

Euan Morton is a captivating Hedwig. He brings just the right sense of jaded European-ness (sometimes he seems to be channeling Marlene Dietrich), and he’s marvelous in his sassy interplay with the audience. Morton also has a superb and very flexible voice; purely as singing, this is the most accomplished Hedwig I’ve heard. He also finds the lost, frightened quality underneath her audacious and shellacked exterior.

The same could be said about the show in general. I don’t love every aspect of this amped-up version—sometimes I miss the intimacy and grittiness of the original. But it has its own excitement, while also preserving the poignant heart of this very special show.

Hedwig and the Angry Inch plays at the Forrest Theatre through April 23. For more information, visit the website.