THEATER REVIEW: PTC’s Hand to God Proves the Devil is in the Details

What should be shocking and hilarious emerges here as kind of naughty and sort of funny. 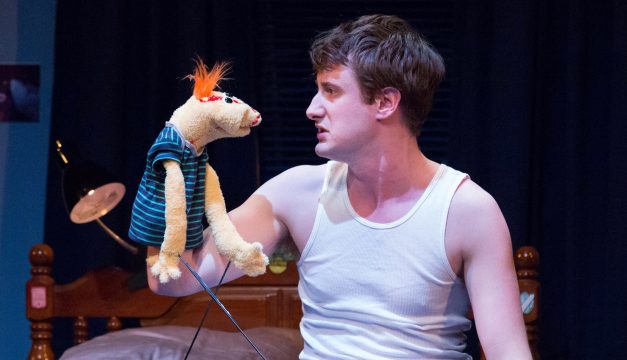 The alchemy that makes comedy gold is so fragile that even seasoned veterans can’t always produce it. Of course, a great script is the beginning—but it’s not enough. To fully click, the material also needs just the right balance with the cast and creative team, not just individually, but together.

Philadelphia Theatre Company’s Hand to God has some of our best actors (Aubie Merrylees especially shines in the dual role of Jason, a young boy, and Tyrone, his puppet other-half), and a fine director (Matt Pfeiffer). They’ve even brought in local legend Robert Smythe to design the puppets. But despite lots of good work, the show doesn’t consistently achieve lift-off.

It confirmed my sense that Hand to God, which I saw previously in the New York production, is really difficult. Beneath its surface hijinks, Robert Askins’ play lives on a razor’s edge between slapstick and violence, humor and rage. (Briefly: in a tiny Texas town, a recently abandoned mother with a problem teenage son tries to work through her pain by teaching Sunday school for troubled kids. As Rachel Maddow would say, it doesn’t go well.) 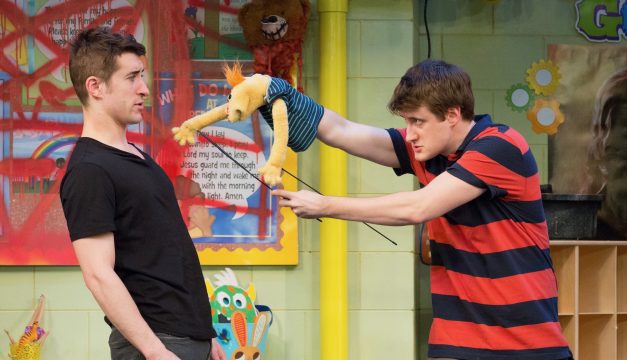 A couple of specific issues here—in this adults-playing-children cast, Merrylees and Alex Keiper do very well, but Matteo Scammel is too mature, which weakens a key subplot. The tense, underlying sexual energy is only intermittent. And more generally, the tone is cartoonish, which is right—but without the brute force behind it.

It may also be that Hand to God isn’t substantial enough to merit a second viewing. It’s a clever play with brilliant stretches, but it never fully delivers on its promise. Even in the pitch-perfect New York production, the show petered out in Act II, and the final scene was a letdown.  At PTC, the whole thing was further neutralized—what I remembered as shocking and hilarious emerges here as kind of naughty and sort of funny. This Hand to God proves an old lesson—the devil is in the details.