THEATER REVIEW: In InterAct’s You for Me for You, the Parallel Risks of Leaving and Staying

Even when we’re not clear where Mia Chung’s play is going, the trip is more than worthwhile. 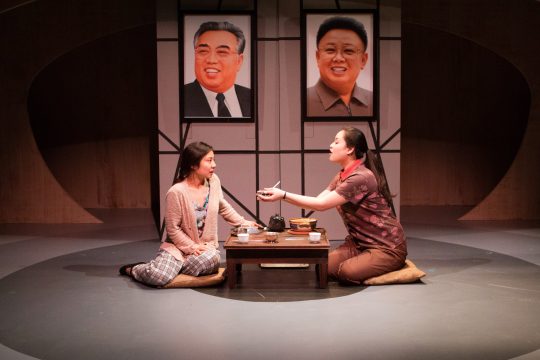 Bi Jean Ngo and Mina Kawahara in You for Me for You. (Photo by Kathryn Raines / Plate 3)

If you see You for Me for You at InterAct—and I think you should—I have some advice: don’t try too hard to make all the pieces fit. Mia Chung’s provocative, gripping, occasionally frustrating play is rich in ideas. Some are fully developed; others appear and disappear out of nowhere, without a resolution. Even the genre is an open question. You for Me is a comedy, a drama, a thriller, and pretty much everything in between. Don’t ask why—just go with it.

There is a story arc—two adult sisters in North Korea, Junhee (played by Mina Kawahara), and Minhee (Bi Jean Ngo) formulate a plan to escape their homeland. To call it high-risk is an understatement—but the cost of staying is equally unthinkable.

Director Rick Shiomi’s production hits all the right notes, beginning with the two actors. Ngo and Kawahara give emotionally complex performances, and both are so likeable that we really care what happens.

The first scene is a good distillation of Chung’s gifts. Initially, it looks realistic, almost comforting. There’s an obvious bond between Minhee and Junhee, who have each other, at least. It doesn’t take long, though, to sense that something isn’t right. Do these two have no one else to help them?  They mention family—where are they, and why aren’t they involved? Minhee in particular seems to be fragile, almost jumping out of her skin. Heightening the tension are grinning but scary portraits of Kim Il-sung and Kim Jong-il that seem to float just above the sisters’ heads. 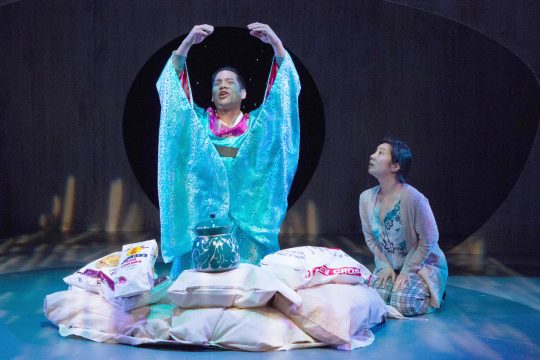 Justin Jain and Bi Jean Ngo in You for Me for You. (Photo by Kathryn Raines / Plate 3)

From here, the double narrative (well, maybe its three or five) twists and turns, taking on a kind of dream thinking—sometimes logical, sometimes abstruse and surreal. Along the way, the sisters encounter a number of oddball characters (many of them played with winning charm by Justin Jain) and strange situations. Just when it looks like there may be a resolution in one story, at least, elsewhere everything comes unglued.

Chung handles most of this with exceptional skill and a compellingly original playwriting voice. There’s one device here—superbly managed by actor Hillary Parker—that’s so clever I’m surprised it’s not been done before.

Even when Chung’s script goes off-the-rails (and it does, sometimes), we’re invested and willing to follow.  The destination may not always be clear—but the trip itself is more than worthwhile.

You for Me for You plays through April 16. For more information, visit the Interact Theatre Company website.