THEATER REVIEW: Murder on the Orient Express Arrives at McCarter by Way of Hollywood 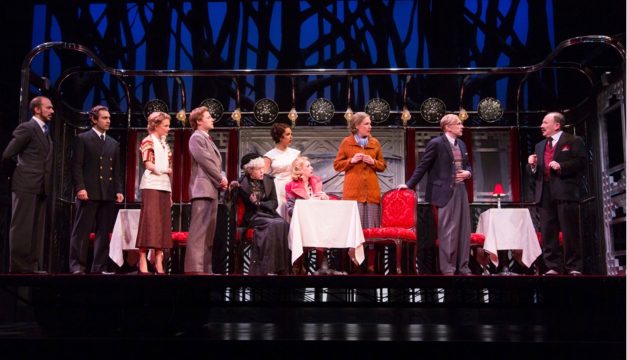 The Cast of Murder on the Orient Express at McCarter Theatre Center. (Photo by T Charles Erickson)

I’m going to tell you whodunnit, and it’s not a spoiler. Are you ready? It’s film director Sidney Lumet—and what he did, in his 1974 blockbuster movie version, is fundamentally change the nature of Murder on the Orient Express.

Agatha Christie’s original novel—written and set four decades earlier, in a Europe on the brink of war—had moments of humor, but was mostly a mystery with a serious and sinister core, as well as a message about culpability.  Lumet reinvented it as a deluxe, star-studded romp, full of sumptuous costumes and décor. Oh, the mystery is still there—but it’s on the back burner, behind a lot of campy humor. Lumet knew what he was doing, certainly—his Murder on the Orient Express initiated a new cottage industry for lavish Christie film adaptations.

In this new stage version at McCarter, author Ken Ludwig looks as much to Lumet (and his screenwriter, Paul Dehn) as he does to Christie. Maybe more—though he has brought back some elements of the novel, the comedy here is heightened even beyond the movie.

That’s not necessarily a bad thing, but it depends on what you want. There’s pleasure to be had here in the look of the production, especially the gorgeous costumes by William Ivey Long, and Beowulf Boritt’s imaginative scenery. Ludwig does a good job setting up the premise, and he and director Emily Mann work to deliver it with cinematic verve. 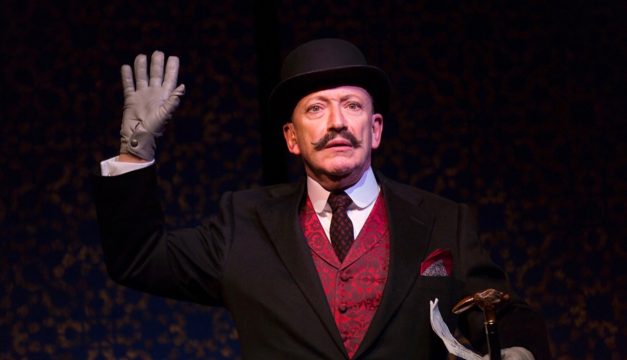 The broadly-delineated characters are played in high style by ten actors. I especially enjoyed Julie Halston as the wealthy American matriarch, Helen Hubbard—Halston really understands screwball comedy, and what she does here is a kind of masterclass. Allan Corduner is terrific as detective Hercule Poirot; he, too, nails the humor, but he also finds a rather touching moral center in the character; likewise, Alexandra Silber has some lovely, poignant moments as the Countess Andrenyi.

Watching Corduner and Silber, I became more aware of what’s missing in this adaptation—the sense that a real crime had been committed, wreaking devastating results on a family. I wish there were more shadowy moments. The plotline is here, but not the gravitas—and without it, it’s difficult to take Murder on the Orient Express seriously.  I also wonder how contemporary audiences will respond to the international stereotyping, including a range of theatrical accents that here have a lot of continental drift.

McCarter’s Murder on the Orient Express captures some of the exotic glamour of 1930s in an entertaining, wish fulfillment kind of way. If that’s what you’re looking for, you’ll have pleasant ride. If you want the darker, more complex world that Christie originally created, you’ll need a different train.