THEATER REVIEW: In The Lyons, The Family That Stays Together… Probably Shouldn’t 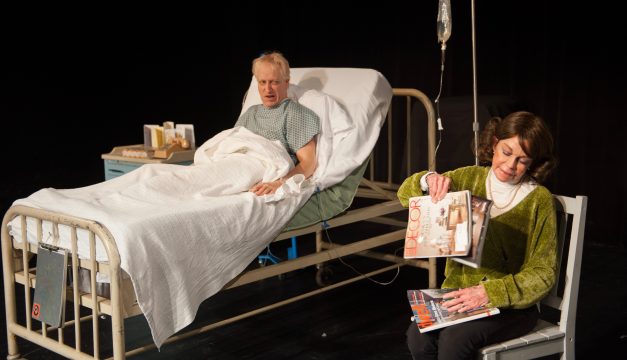 John Zak and Renee Richman-Weisband in The Lyons at Isis Productions. (Photo by Kristine Di Grigoli)

Rita Lyons is the least cuddly Jewish mother you’ve ever seen. If you don’t believe me, just ask her kids (daughter Lisa and son Curtis). She doesn’t complain if they don’t phone. (More likely, she’ll ignore the call if she recognizes the number). She won’t tempt them with treats—Curtis is too pudgy already, as Rita is quick to notice. And forget about family visits—she hasn’t even bothered to tell them their father is at death’s door.

She’s also one of contemporary theater’s great characters. Watching Nicky Silver’s The Lyons—that is, when I could catch my breath from laughing—my first thought was to wonder why Silver isn’t produced more often by regional companies. His plays are fairly streamlined (four characters in The Lyons, which runs less than two hours), and the comic writing is sure-fire. But at the same time, I can see the drawbacks. Silver’s humor is coruscating, his language and themes not family-friendly, and the style—very much a hip, gay, Jewish New York sensibility—might not work so well in other parts of the country.

Fortunately for us, Isis Productions and their Artistic Director, Renee Richman-Weisband, has championed Silver’s work. Last year’s Too Much Sun is followed now by The Lyons, which is a much stronger play.

Beyond producing The Lyons, Weisband also plays Rita. It’s a terrific fit for the diminutive actress with a big personality and presence. Looking here like an elfin, Jewish Mary Tyler Moore, manages the hairpin turns (we loathe Rita’s cruelty one minute, adore her frankness the next) with considerable skill. The rest of the cast is terrific, too—they include John Zak as Rita’s irascible, regrets-everything husband, Ben; Kirsten Quinn as the needy Lisa; Kyle Fennie as the sad-sack Curtis; Chase Byrd as Brian, a boyishly handsome real estate agent; and Meg Trelease as a no-nonsense nurse.

On opening night, the individual contributions in director Neill Hartley’s production were consistently strong, but the conversational rhythms didn’t always gel. Most jokes landed, but a few missed the split-second timing. More experience in front of an audience should help. What was especially impressive here is that The Lyons isn’t simply a collection of great punchlines—it’s a real play with real characters, and Weisband’s performance has some unexpectedly poignant overtones.

Certainly, this production is an excellent intro to Silver’s work—and if you don’t know his plays, you should. Like it or not, folks, this is what family looks like.

The Lyons plays through April 2. For more information, visit the Isis Production’s website.