THEATER REVIEW: The Curious Incident of the Dog in the Night-Time
Subscribe
Follow
I'm a scraper
This search result is here to prevent scraping

THEATER REVIEW: The Curious Incident of the Dog in the Night-Time

In this extraordinary sensory experience, the human dimension sometimes fades into the background. 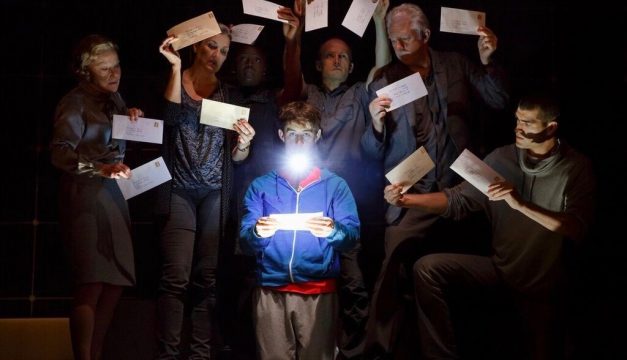 Adam Langdon and the Cast of Curious Incident of the Dog at the Academy of Music. (Photo by Joan Marcus)

In moments of stress, Christopher, the 15-year-old, brilliant but troubled hero of The Curious Incident of the Dog, comforts himself with facts, numbers, and a search for congruity (his behaviour suggests Asperger’s syndrome, though it’s not referred to explicitly). So, let’s start there. This visually brilliant theatrical adaptation (by Simon Stephens, directed by Marianne Elliott) is in Philadelphia through March 5.  Good timing: it’s here at exactly the moment when Mark Haddon’s novel on which the play is based is the centerpiece for this year’s One Book, One Philadelphia event—an initiative which is celebrating its 15th anniversary.  This tour of Curious Incident follows hit runs on Broadway (799 performances), and originally in the U.K. at the National Theatre (it opened in August 2012, and continues to run at London’s Gielgud Theatre).

In Philadelphia, Curious Incident is playing at the Academy of Music, our grandest theater… and one of our largest (Christopher would know it has 2,509 seats).  It’s not a space built for plays—but Curious Incident isn’t (just) a play, though it’s that, too. It is simultaneously a mystery; a family drama about the stresses that Christopher’s situation place on him and those around him; and an extraordinary sensory experience for the audience. 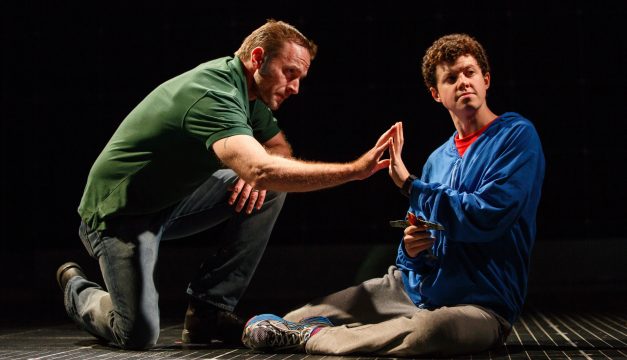 Gene Gillette and Adam Langdon in The Curious Incident of the Dog at the Academy of Music. (Photo by Joan Marcus)

The family drama fares less well here. Part of it is the Academy, where the resonant acoustics don’t favor speech, and details tend to get lost in the vastness of the house. But it’s an issue in the adaptation itself, which employs a sophisticated, fragmentary narrative.  Set amidst Elliott’s hugely imaginative staging, the human dimension sometimes fades into the background.

On the other hand, Curious Incident is, famously, a spectacular theatrical experience.  And for that, the Academy is a superb venue—the audience here was visibly enchanted with the imagery and lightning-fast stagecraft. (This isn’t a family show in the conventional sense, but mature children—especially those with an interest in theatre—will love it.)

And at its best—as in the first half of the second act—the personal story and the sense of spectacle intersect. In an unforgettable sequence, we (the audience) experience viscerally the sensory overload that is a regular part of Christopher’s life.  It’s both thrilling and heartbreaking, and for many (me included) that alone makes Curious Incident a must-see.