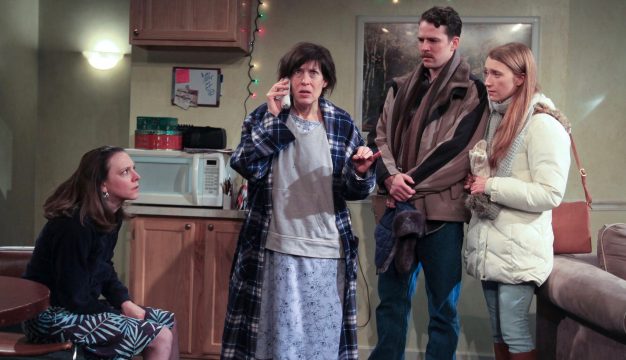 As America learns more every day, many of us are just a step away from catastrophe.  So it is for Maggie, a Manchester, New Hampshire divorcée, living of the edge. She’s perpetually behind on bills, overworked and stretched to the limit, and living a tense truce with her difficult mother. Then Maggie’s car is stolen—an event that would be a challenge for anyone. Will this be the moment where everything in her life, including her family, implodes?

It’s off to a poor start, despite some good acting (Molly Ward especially, who has an interesting sardonic edge). Lost Girls could work as a drama or a black comedy, but not as the punchline-heavy, shtick-ridden sitcom we see here. (Does Pollono think the plethora of cursing makes his play seem more weighty and adult? It doesn’t.)  The estimable Catharine Slusar (too young to play the mother), deserves better than to be stuck in a black fright wig, nightgown tucked into her underwear, essentially channeling Vicki Lawrence in Mama’s Family.

But it gets better. The next scene—two young people in a motel, about to experience their first sexual encounter—has some freshness both in the writing and the acting by Trevor William Fayle and Susanne Collins. Collins in particular finds a nice mix between vulnerability and her tough Goth persona. For the next few scenes, Pollono’s play moves between one scenario and the other—and, qualitatively speaking—between light and dark. 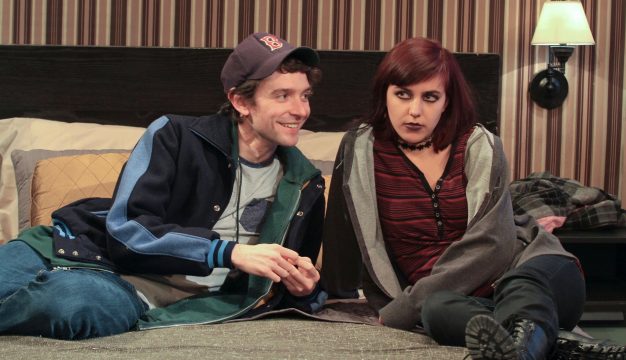 By the midpoint, Lost Girls has taken on a new seriousness. A couple of parallel scenes—between Maggie and Lou, her ex-husband (Sean Bradley, good here) and the two young people—have Pollono’s best writing. He also introduces a clever structural device that will keep our attention till the end.

Still, the good material in Lost Girls is consistently undermined by the sitcom jokiness. I’m all for mixing comedy and drama, but here it feels as though Pollono doesn’t know what he wants.  Director Joe Canuso doesn’t figure it out either, but I don’t know if anybody could.

Of this, though, I’m sure—Lost Girls needs significant rewriting before it’s ready for prime-time.