Run in Your Undies for Cupid Charities 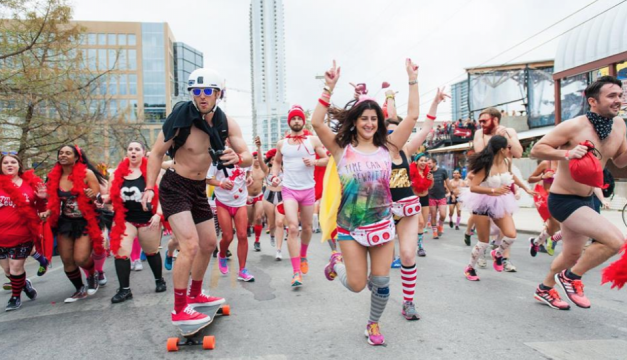 The Cupid’s Undie Run is taking place in cities around the world this month. Philly’s is on Saturday, February 18th. Photo provided

Keep the Valentine’s Day vibe going into the weekend with Cupid’s Undie Run, a party and fun run on Saturday where participants race in their skivvies. If that sounds a little more naked than you’re willing to be outside in public in winter, costumes, underwear over clothes, or just your usual February getup are all fine to wear, too.

The event raises awareness and funds for neurofibromatosis research, with the proceeds going to the Children’s Tumor Foundation. Last year’s run took place in 36 cities and raised $3.7 million, according to the organizer, Cupid Charities. This year it’s happening in 47 cities around the world and Cupid Charities hopes to raise over $4 million.

The Philly Undie Run starts and ends at XFinity Live (by the stadiums), and the run part is bookended by a big party indoors. Plus, you’re only running about a mile, so by the time it starts to kick in just how cold you are, you’ll be back inside celebrating with a beer.

Be Well Philly has a list of cool fitness and foodie events happening this month, though you should probably wear clothes for most of them.