When asked what she would say if she could speak to a million people, Lauren answered, “Do you have any pets?”

A new blog put together by three Penn students features photos and stories from what might be an unexpected location: the HMS School for Children with Cerebral Palsy, in University City. The blog, called A Different Kind of Expression, uses the style of Humans of New York (and its many imitators) to give the world a window into the lives of the kids who spend their days at the school, and the adults who support and educate them.

Nikhil Rajapuram, one of the founders of A Different Kind of Expression, has worked with HMS for almost two years, and he was looking for a way to share the amazing stories he saw there. “The biggest issue facing people with disabilities, especially cerebral palsy, is social stigma,” he says. He hopes that this site can help fight that stigma by helping people understand the cerebral palsy community.

Earlier this year, Rajapuram was attending a youth wheelchair basketball tournament, and on a whim he started chatting with one of the players and snapped his picture. He posted the photo on Facebook with a quote from their conversation, and was overwhelmed by the response he got. That got him thinking about whether photography could be a useful tool in his work at the school. He wrote a status asking if anyone at Penn would be interested, and before long he was contacted by Brenda Nguyen, who takes all the photos, and Ryan Zahalka, who helped build the website.

It turns out that pictures are a great way to show the joys and difficulties of life with cerebral palsy. “A lot of the kids I work with are non-verbal, so I had to broaden my definition of communication,” Rajapuram says. The blog pairs crisp, bright photos of students and staff with a few quotes from a conversation with them. Some posts also include a short description of the conversation (“Lauren communicates through a touch screen speech device. She loves to laugh.”) The idea is to realistically capture the feeling of talking to people at the school, without the difficulties that might arise from filming or wordy transcripts. The result is quietly inspiring.

Rajapuram and the others founders don’t know if the site will end up getting a lot of traffic. They just hope it makes a difference in the life of the kids they work with. So far, they seem to be achieving that goal. “Everyone in the administration and the parents have loved it. They think it’s really captured the kids’ essence,” says Annie Oberfield, a rep from HMS School. “Everybody I’ve talked to has been blown away.

All three of the founders are graduating from Penn in a few weeks — Rajapuram is going to India on a Fulbright Scholarship, to work with kids with cerebral palsy there — but they’re optimistic that new students will take over the project. For now, though, they’re just happy that these stories are getting told, and people are listening. “I think the world would be a much better place if we just stopped to listen,” Rajapuram says. 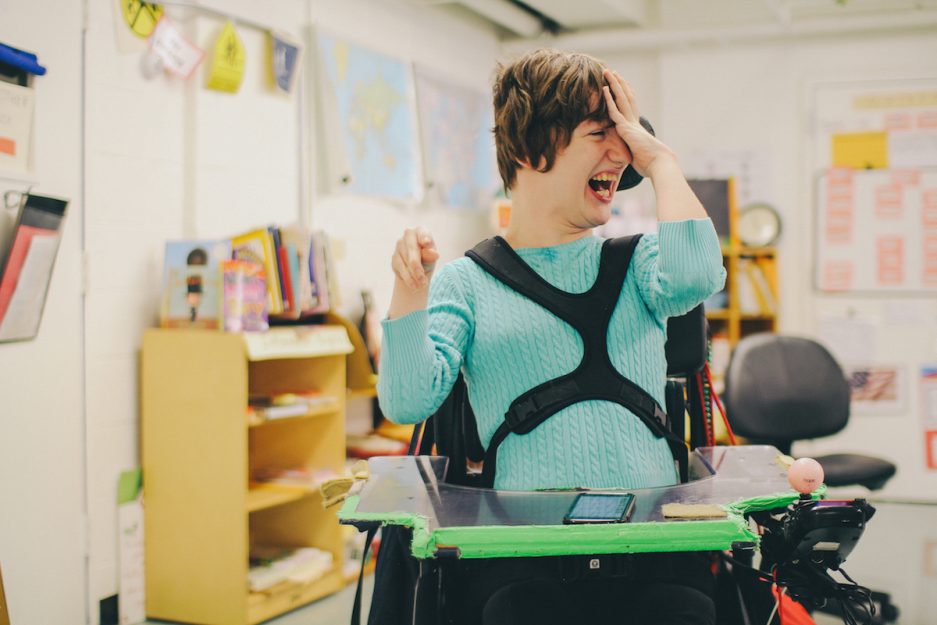 “What’s your favorite Beyoncé song?”
“All of them!” 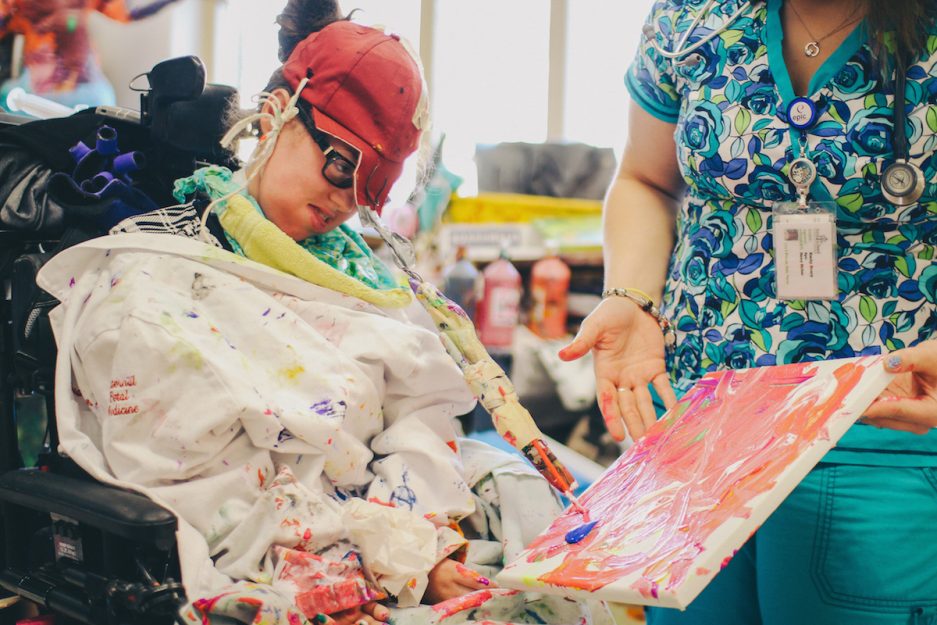 Haley was painting to “Welcome to the Jungle” by Guns N’ Roses blasting in the background. 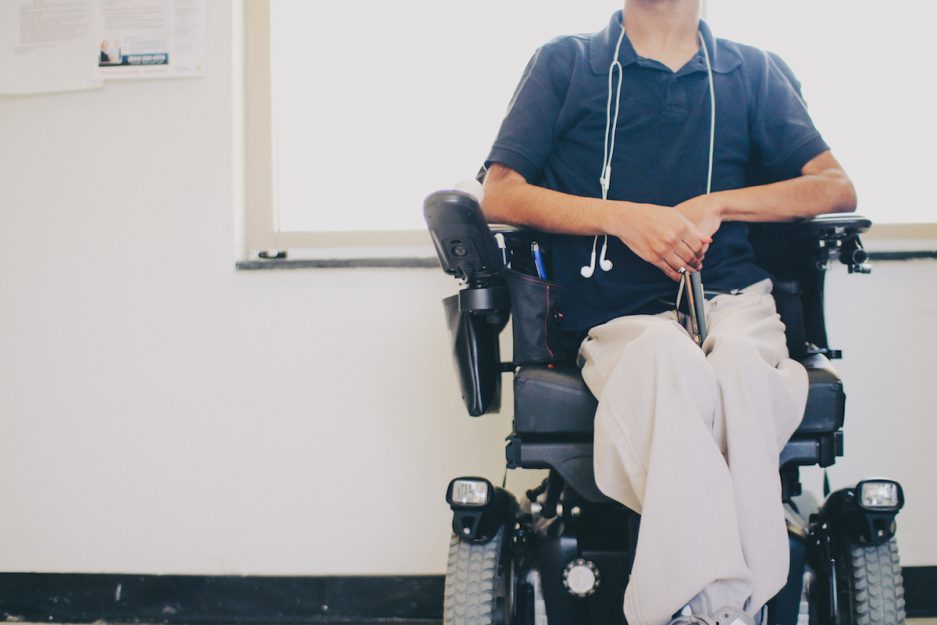 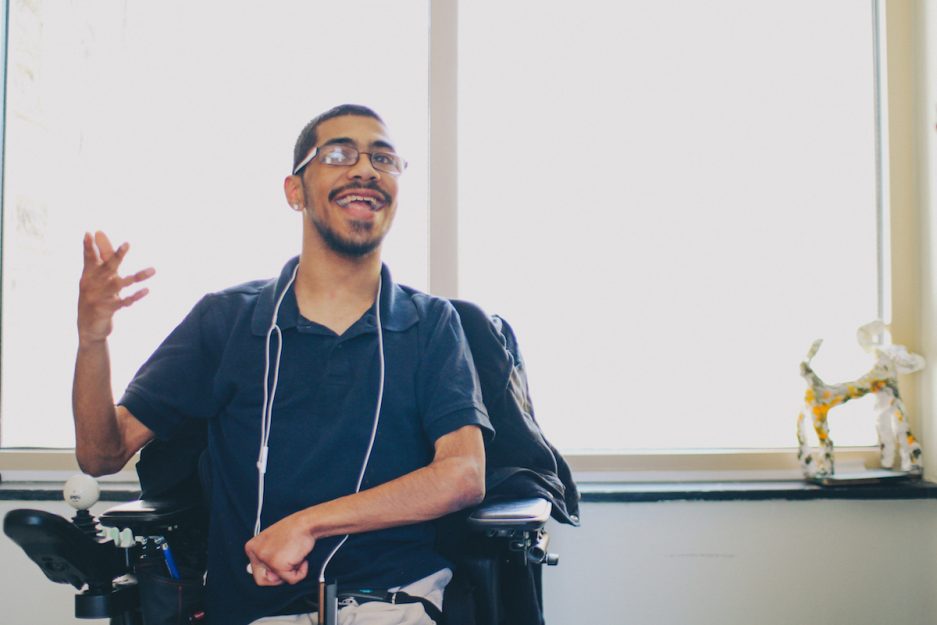 “Describe your perfect day.”
“I’d be with my friends, going around. A nice day in the park, maybe meet a girl? At the moment I‘m single.” 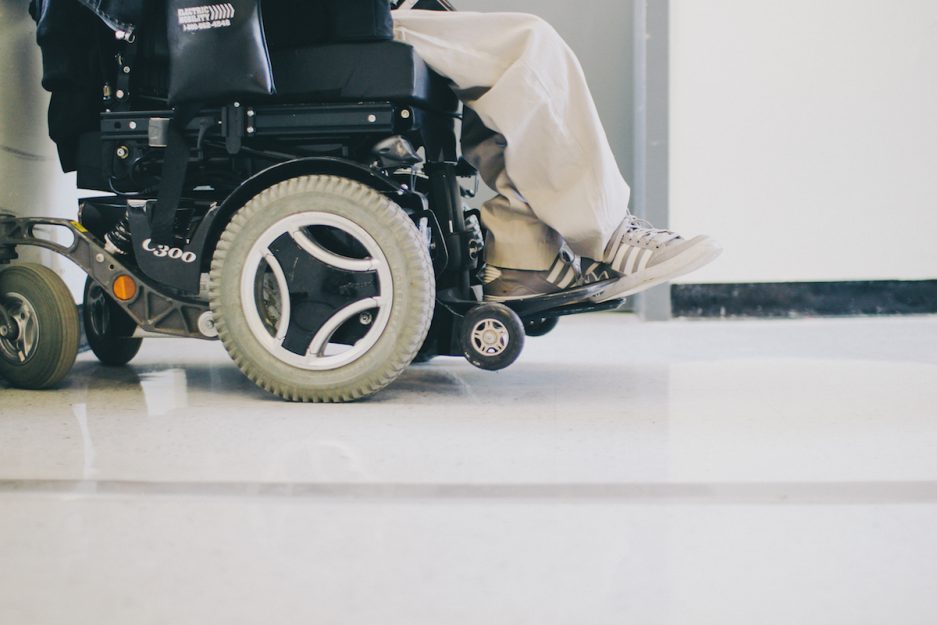 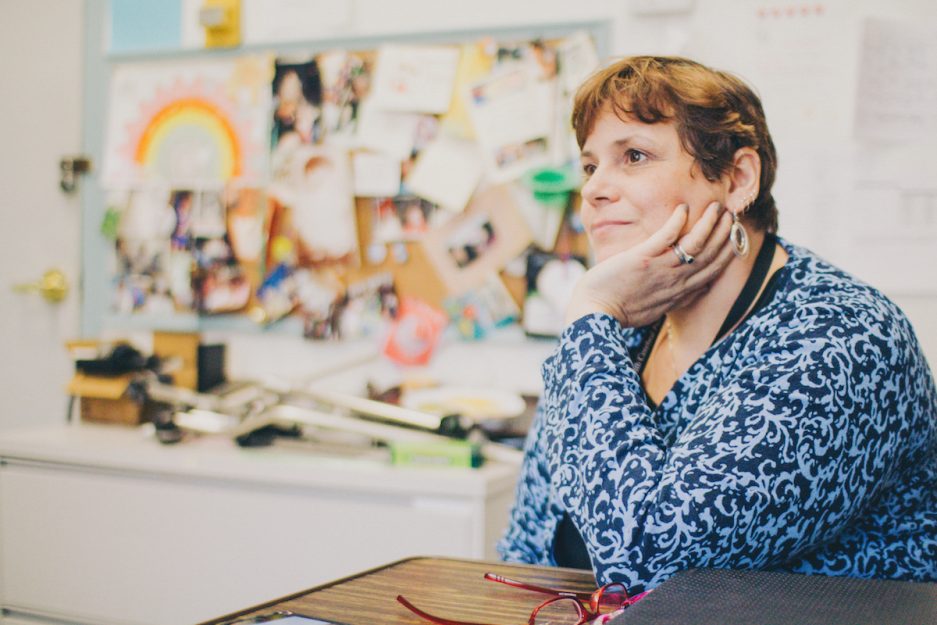 “Everybody is good at something, talented at something. Even kids who are cognitively functioning at six months can do something better than everyone else, and you have to find it. To the kids who drive power wheelchairs with their heads, I can’t do what they do. I’ll drive Eric’s chair down the hallway, and I’ll bang into stuff, but he doesn’t when he drives it. Everybody has their own talent. Everybody chooses their own words and life, and it’s different from everybody else’s. But I can understand being nervous and afraid.” 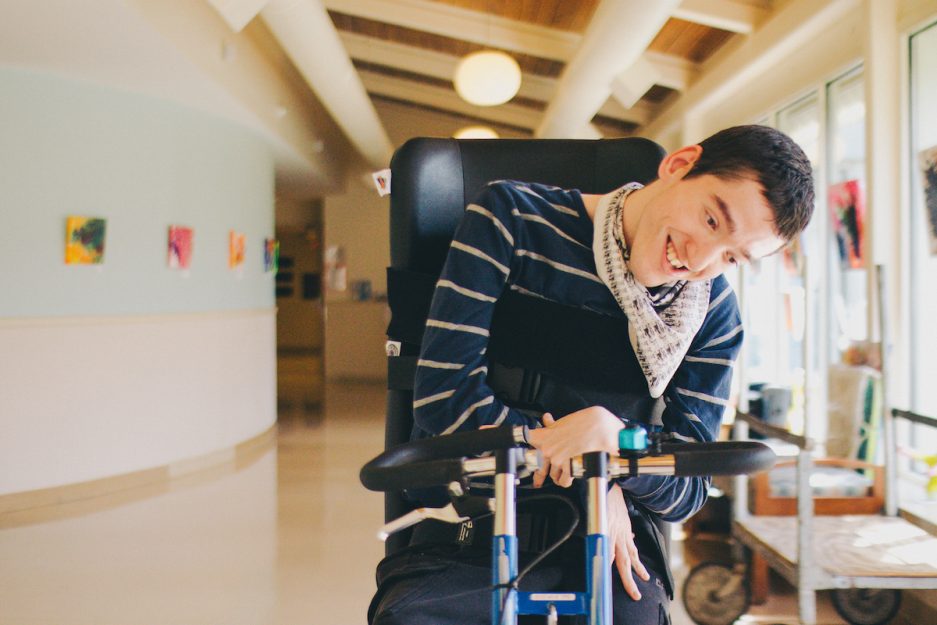 “What do you do on Sundays?”
“Watch football.”

“If you could play any position, what would you—”
“Quarterback!” 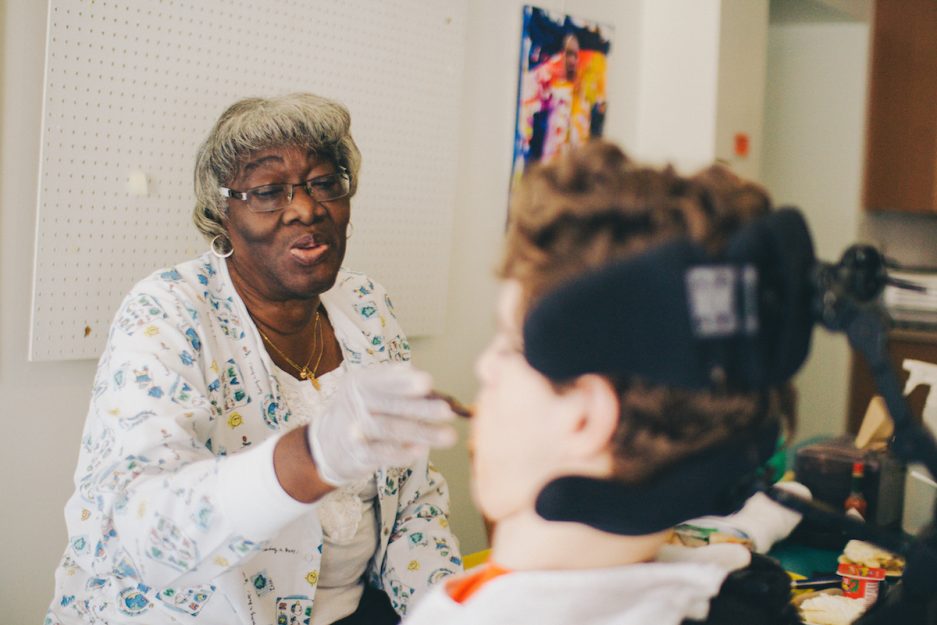 “What would you tell a young parent who’s just had a child with CP?”
“Just be patient, be loving. Take your time and go slow. It’ll come to you, because it’s really not a hard thing to do when you have a child and you love your child. Just be patient, and if you have other children, treat that child the same as you would treat the one that’s not disabled, because that way they can work together and one can learn from the other.” 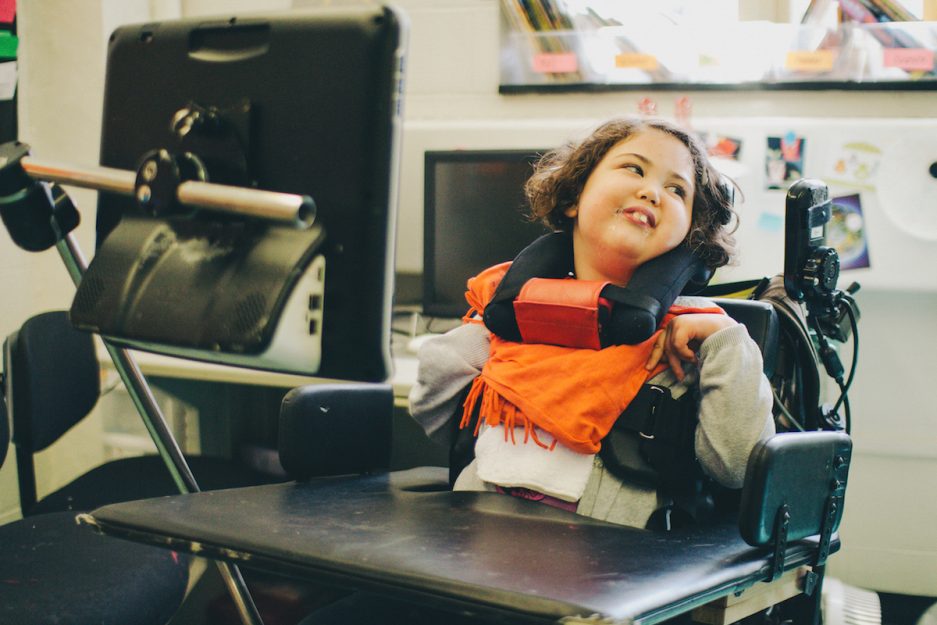 Helena communicates using an eye-gaze assistive device which generates speech according to how she looks at icons on a screen. Sounds complicated, but she’s quite the expert. 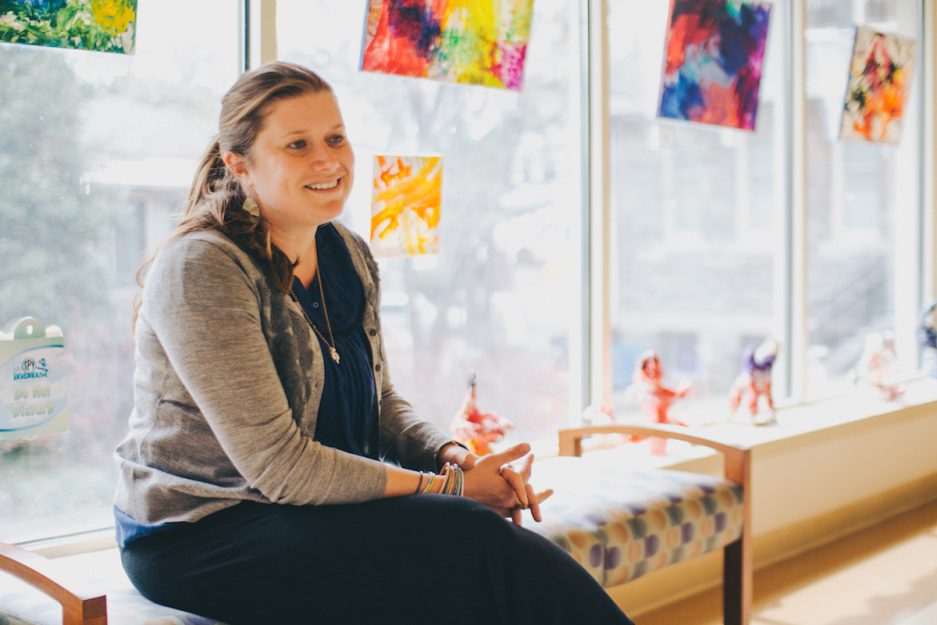 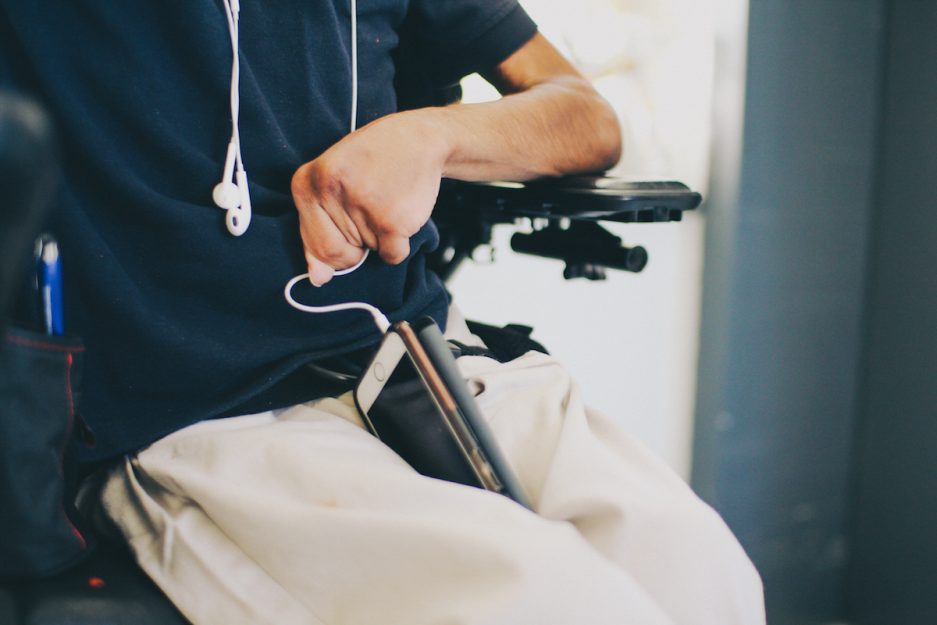