Friday night, Aziz Ansari’s “Aziz Ansari Live” tour made a stop at the Wells Fargo Center. And after opener Hannibal Buress warmed up the crowd with more than a couple quips on Philly (yeah we know, man, South Philly parks in the middle of Broad Street, don’t worry about it) the Comedy Bad Boy (aka Comedy Heartthrob) was geared up to take on his LED-drenched stage.

Ansari’s most recent special, “Buried Alive”—shot in town last year at the Kimmel’s Merriam Theater—marked a pivotal moment in the comedian’s voice.

His once scattered, hyperactive observational comedy gave way to a more reflective approach, exploring the anxieties felt toward a looming adulthood—anxieties shared by pretty much any and everyone on the back end of their 20s. 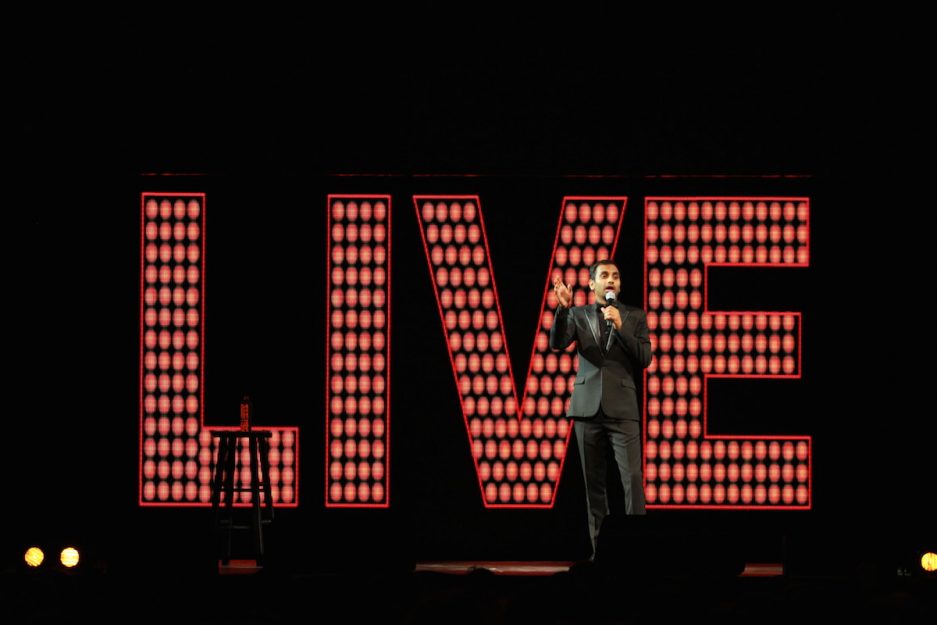 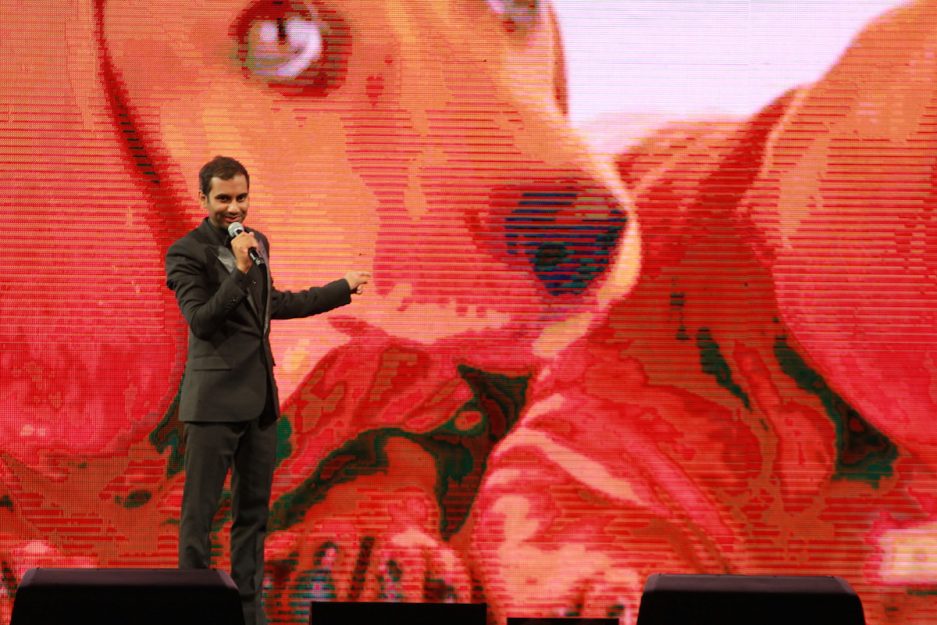 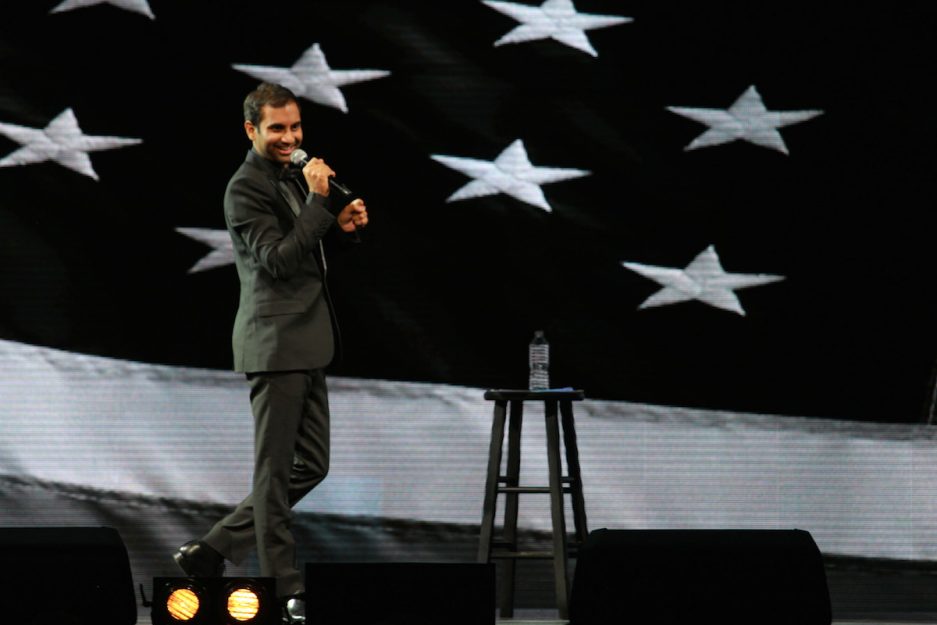 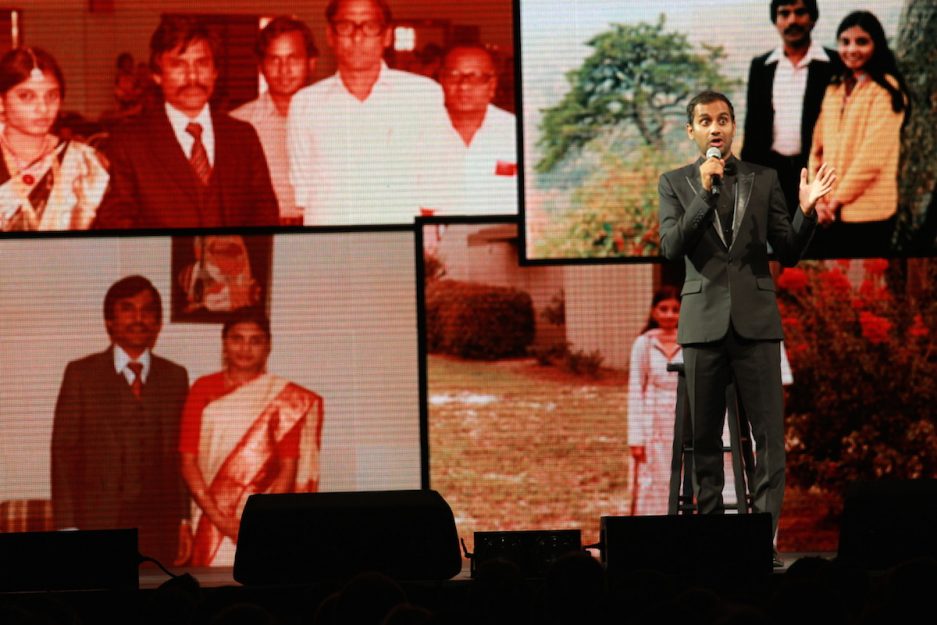 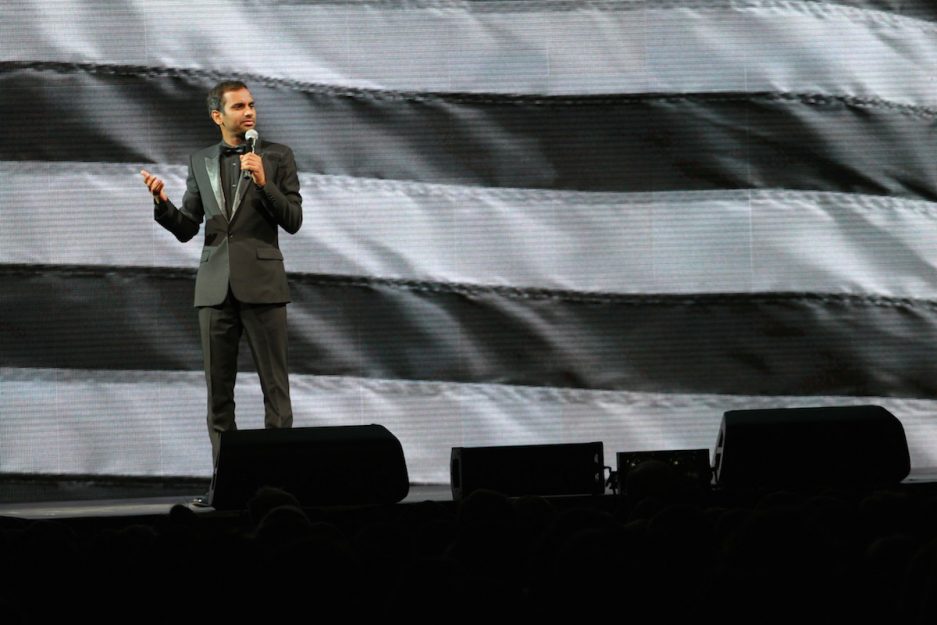 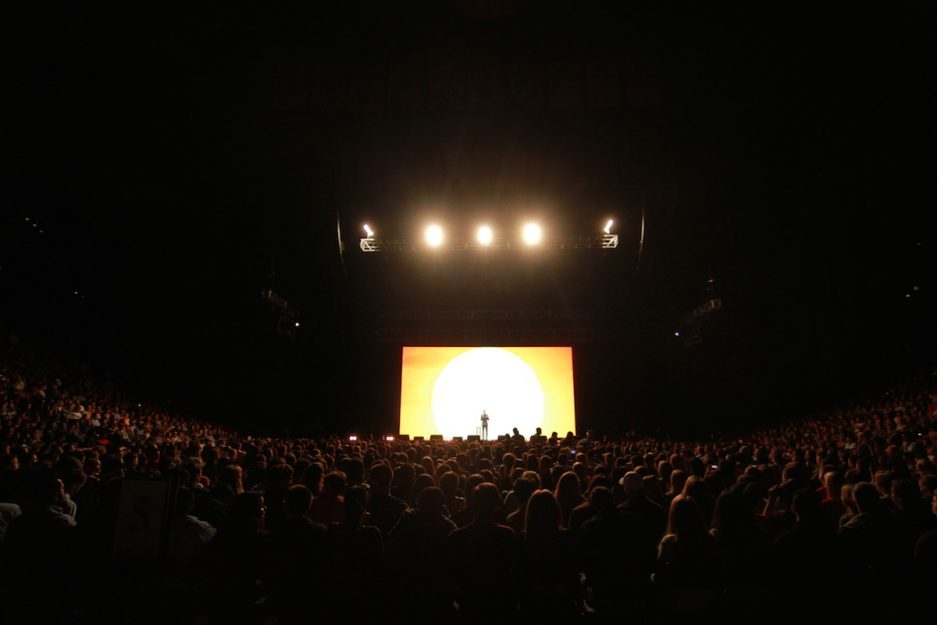 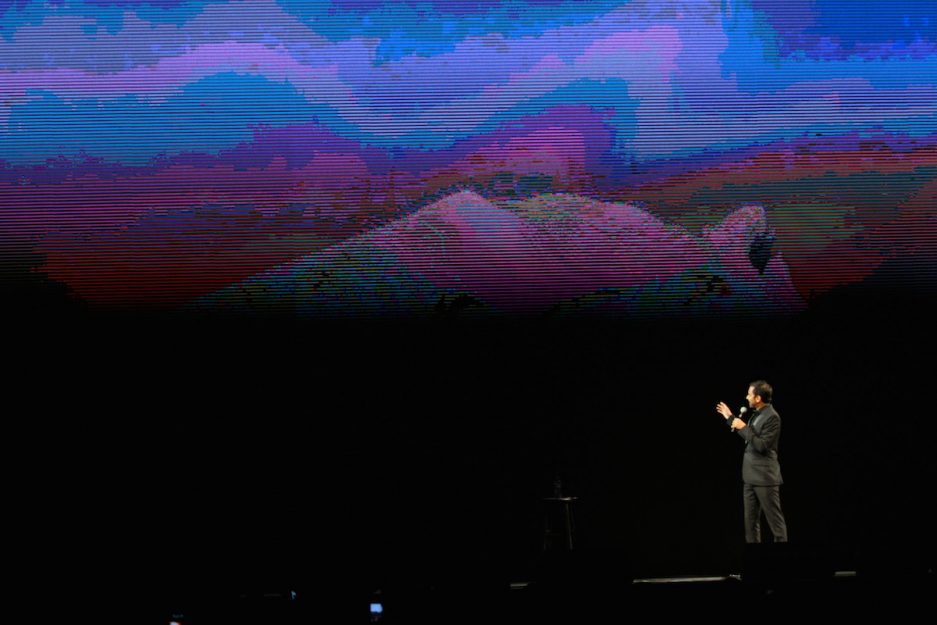 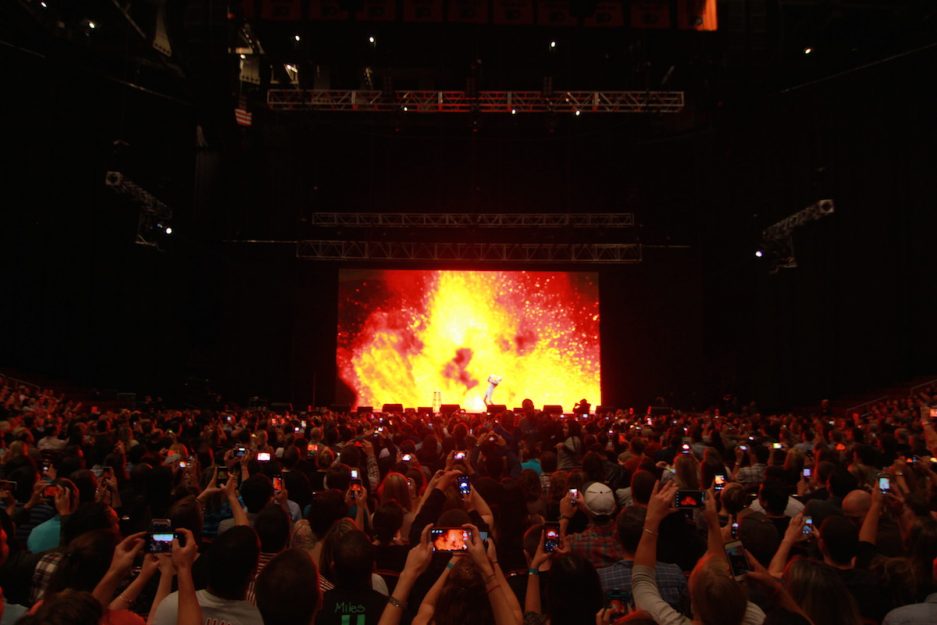 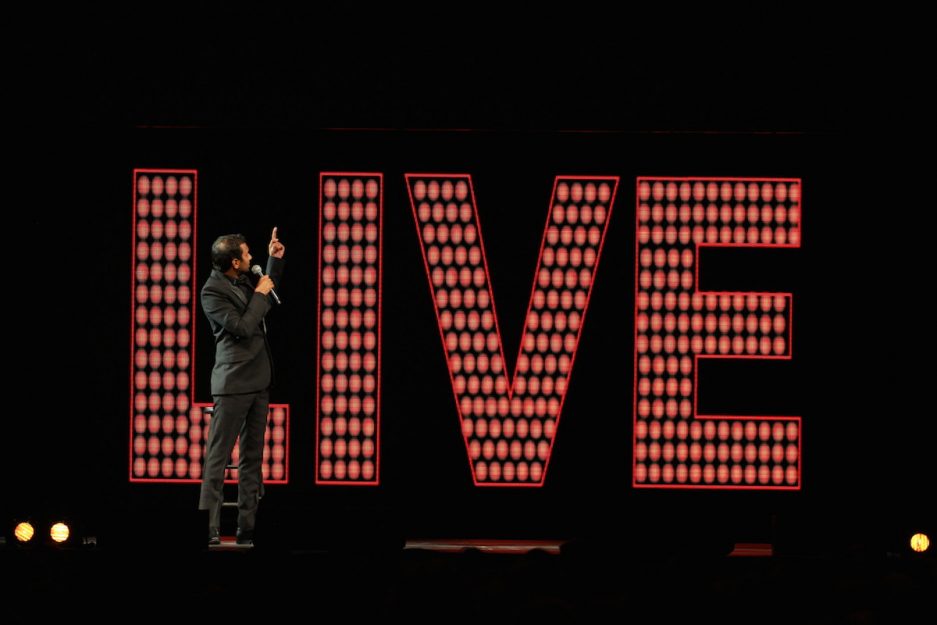 “This new special, I hope, goes even deeper,” Ansari said in a Ticket interview last Wednesday. “I hit topics I never would have had the skill to handle a few years ago.”

Where “Buried Alive” dealt with the acknowledgement of, and subsequent distress that accompanies accepting one’s adult life, “Aziz Ansari  Live” explores the concepts with a higher sense of criticism, focus and confidence.

“Buried Alive” is reluctant to take on the heavy decisions and societal structures that come with adulthood, but “Aziz Ansari Live” is wary of buying into these structures at all, concerned instead with how an age of smartphones and endlessly auto-refreshing Events, Likes and Suggested Matches have robbed an entire generation of the ability to commit to any life decision whatsoever.

In an era of infinitely scrolling options, no choice feels worth binding to—be it an afternoon plan with a friend or a long term-relationship—when there’s almost certainly a better option out there waiting for you, if you just hold out and look for a while longer.

At one point, Ansari invited members of the audience to approach the stage for an illustrative demonstration. He hoped to dissect text conversations with peoples’ fledgling romantic interests, and track just how distant and fickle our social exchanges have become.

Ansari is no stranger to audience interaction (it’s something he’s incorporated into past specials in gradually increasing degrees). But when a man approached the stage revealing his failed plans to take a date to that evening’s show, the bit took an unexpected turn—ultimately resulting in the far-and-away highlight of the night.

All of a sudden, Ansari was hooked to the would-be couple’s text dialogue, frantically reading the proclaimed “rollercoaster conversation” aloud like a leaked Game of Thrones manuscript. So taken (and impressed, even inspired) was he with this man’s earnest and proactive courting efforts, that he was moved to drastic action: bringing up the front video camera on the man’s phone and, joined by the audience of thousands, exclaiming “How could you cancel on Will like that?!?”

Who knows—maybe after an experience like that, witnessing Will’s steadfast commitment to his could’ve-been date, Ansari might use his experience to re-evaluate his disillusionment; to rethink his entire comedic perspective yet again, even citing Philly as the catalyst for his next phase of reinvention.

Or if not, I think we could just settle for his coming back soon for another show. We can all at least commit to that.