That Oscar Selfie Could Be Worth Up to $1 Billion Is it true that Ellen’s much-retweeted Oscar selfie is actually worth between $800,000 and $1 billion? From NBC News:

That is what Maurice Levy, CEO of advertising firm Publicis (which handles advertising for Samsung, the brand of camera that the selfie was taken on), said that Ellen DeGeneres’ infamous Oscar selfie was worth to its client Samsung. In case you forgot, here is the star-filled photo DeGeneres tweeted out during the Oscars broadcast:

That is a lot of A-List celebrities posing in front of a Samsung Galaxy Note 3. The tweet itself was seen by 37 million people while the Oscar broadcast was seen by 43 million.

Levy, speaking to a crowd at the MIPTV marketing event on Monday, claimed responsibility for that photo and the recent selfie featuring professional baseball player David Ortiz and President Barack Obama.

“This is something we did for Samsung,” Levy said. “It’s us.” 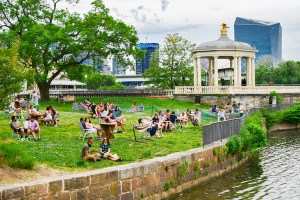