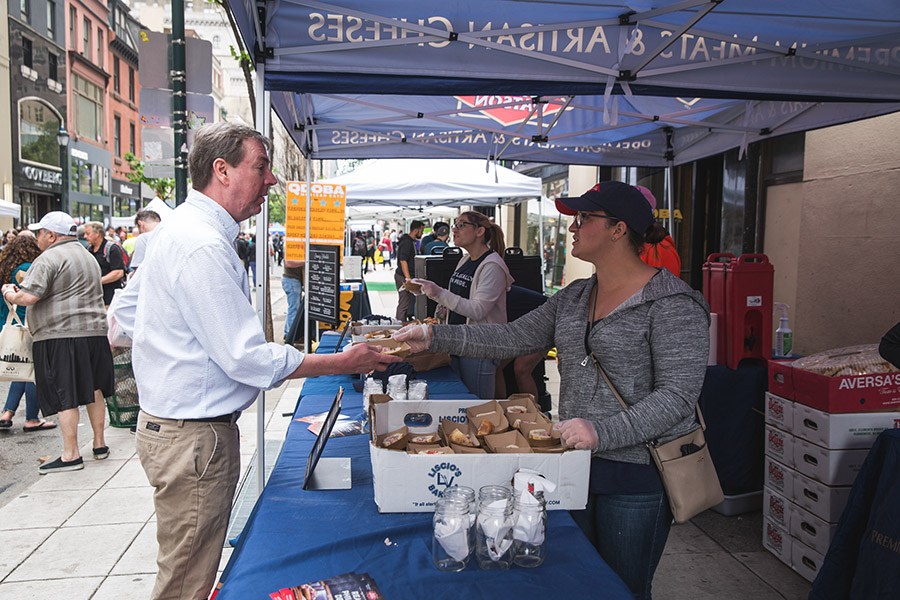 It might be hard to believe but we’re already halfway through Dietz & Watson’s Real Philly Deli Faceoff (don’t worry you can still vote here!). If you haven’t gotten your hoagie game together yet, now’s your chance. There’s a spread of hoagie happenings all over town this spring where you can eat, drink, dance, and honor the iconic Philly food.

Dietz and Watson celebrates the hoagie all month long. Here’s how you can too:

Did you know there’s a national hoagie day? It’s May 5th! Of course, Dietz & Watson has upped the ante and dedicated a full month to these handcrafted and heavenly sandwiches. All month long they’ll be celebrating and serving up surprise giveaways and samples at local radio stations. But the best way for you to get involved is to get out there and explore all of the awesome local delis competing for the Real Philly Deli Faceoff. You can click here to find your nearest deli or even better—set up a tasting tour and swing by several of the hoagie hotspots. Pack your stretchy pants and spend the month celebrating the stand-out subs of our city.

On May 19th head down to 18th Street and Walnut Street for the The Rittenhouse Row Spring Festival. This free day of family fun is full of delicious food and drinks including samples of the signature sandwiches competing for the 2018 Dietz & Watson Best Real Philly Deli crown. Once you’ve secured your sammy (or more likely sammies), stroll through the streets full of over 100 cafes, art, beauty, and fashion booths. Or take in the live music and entertainment, culinary demonstrations, beer and cocktail samplings. Don’t forget to cast your vote while you’re there to declare your all-time favorite hoagie of 2018.

Name something more Philadelphia than this… we dare you! On May 26th Hall & Oates are heading to Festival Pier at Penn’s Landing for the second year in a row to present their concert/culinary celebration, HoagieNation. The all-day event celebrates all things Philly and serves up some seriously good sandwiches (with the help of Dietz & Watson of course!). Dietz will be on deck to host a hoagie happy hour for hungry concert-goers. Starting at 3PM you can stop by the Hoagie Pavilion to sample sandwiches from some of the Real Philly Deli Faceoff contestants and cast your vote for the winner. Think about it—Hall & Oates + Hoagies = The perfect start to summer in the city.

Dietz & Watson has taken your favorite part of the day— happy hour—and hoagiefied (yeah yeah, it’s not a word, but it should be) it. That’s right—they’ve replaced drinks with savory sandwiches. On June 2nd and 3rd you can swing by Spruce Street Harbor Park, located at 301 S Christopher Columbus Boulevard, to taste test sample-sized versions of the sought-out sammies from some of the participating delis in the Real Philly Deli Faceoff. Now you can take a bite out of one of these bad boys and help Dietz decide who should take home the 2018 trophy. Come for the hoagies but stay for the fun—they’ll be live music and lawn games there as well! The best part? It’s all free.