The Best Fuel for Running? According to this Local Group—Beer! 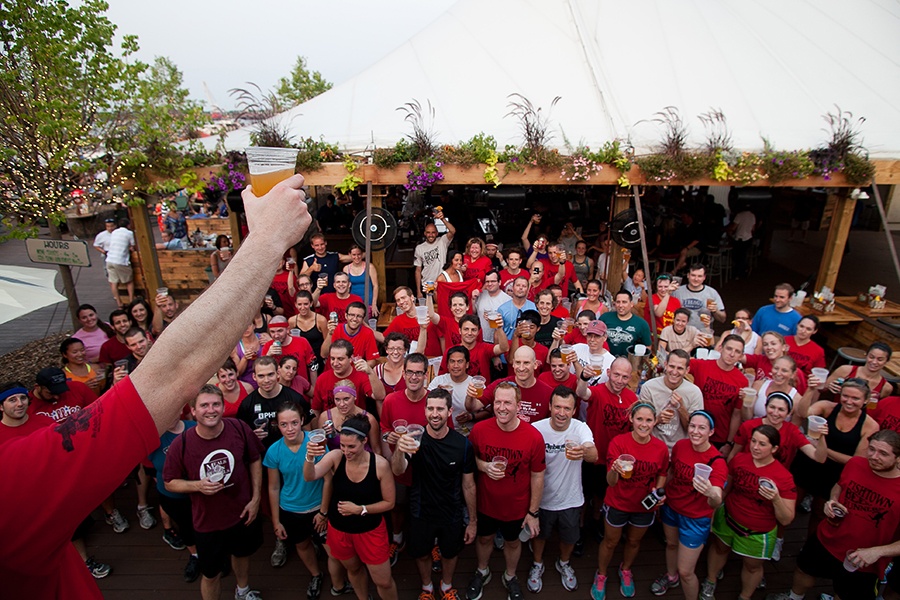 Walking by Fishtown’s Palmer Park on a Thursday night you’ll spot something that might look like a flash mob, but it’s actually the weekly meeting point for Philly’s most famous running club—The Fishtown Beer Runners. The group formed in early 2007, after two friends, David April and Eric Fielder, began training for a 5K together to help David cope with his tough divorce. “Running became therapeutic,” says David. “Every time I went for a run, it was like taking medicine.”

The beer part came in when Eric mentioned a recent study he’d read by professor, Dr. Manuel J. Castillo-Garzon of the University of Granada Medical School, Granada, Spain that suggested beer had hydrating benefits post-workout. As fans of the foamy stuff—David and Eric decided to put his theory to the test post-run…in the name of science, of course!

As David and Eric continued to run together, they continued to end each workout at a pub. “It was a little something that I could do, to get my mind off stuff.” Realizing that each run was healing and fun for him, David decided to share the experience and encourage others to reap the emotional and physical benefits of cardio followed by beer with him. “I thought, why not make running fun and bring other people along?” says David.

On the Thursday before Christmas, in 2007, the Fishtown Beer Runners set out on their first group run. “There were four of us,” David laughs. But through word-of-mouth and social media, they’ve come a long way in their ten years of existence—each Fishtown run averages 70-100 runners per week and there are now many other chapters in Philadelphia area (Manayunk, Elkins Park and Bucks County, just to name a few!).

Their goal is simple—to promote responsible running and drinking in the interest of science. Everyone is welcome and all walks of life and fitness levels are encouraged to join in on the fun. The only rules— an “arrive at the bar no questions asked” policy (for those who might not be feeling their best or ready to run a full three to five miles to the pub) and at the end of the night everyone’s encouraged to “toast to the Professor”. 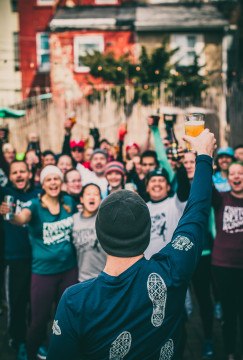 hops. “I believe in responsible consumption,” says David. “Beer can be a part of a healthy lifestyle and a social reward for many.” They’ve garnered such acclaim for their balanced approach that they became the focus of the Spanish Brewer’s Association’s campaign to promote responsible consumption and exercise. David’s even been invited to Spain to speak about their efforts and participate in additional studies with the group’s greatest inspiration, the Professor.

David also believes beer has far more benefits than hydration after a run. “Beer makes people better runners because it adds a social aspect to working out,” he says. “There’s no competition. We’re all together after the run, encouraging one another, supporting one another and helping each other grow.” Throughout the years his theory has proven to be true—there are ten beer runner marriages, and six beer runner babies and counting! The connections made while running are lasting.

Most importantly—it’s not just beer that keeps them running—they’re also heavily involved in their community and charitable efforts. They regularly volunteer with Philabundance, run with Achilles, a running group that pairs guide runners with a visually impaired or disabled runner for long distance races, and participate in the Mayor’s Cup each year. Last year they won The Mayor’s Cup Charity Challenge for their extraordinary donations and contributions to Ella’s Retreat, which provides housing for families with children being treated at CHOP. This year, they’re hoping to raise at least $10k in support of the American Cancer Society, a cause close to many members’ hearts, including David who survived kidney cancer in 2015 and is once again fighting the good fight.

What went from a small gathering on the steps of David’s row home to a Philly fitness/social movement and beyond (there are now chapters in several states, Spain, China, Australia and Greece!), still amazes David. “I didn’t do anything extraordinary. I was just trying to get through my divorce,” he says. “Little did I know that I was building my community to help me get through life’s moments, good and bad.”

Looking to build your own healthy relationship with beer? Try Michelob Ultra. At only 95 calories and only 2.6 grams of carbs, it’s a great way to have fun and stay fit.  Live fit. Live Fun. Live Ultra. 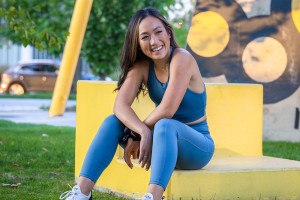 SPONSOR CONTENT Pump Up Your Routine with This Ultimate Workout Playlist by Fitness Pro, Jayel Lewis