Why Every Guy With a Beard Needs Beard Oil—Stat

We tested more than 20 different varieties from 11 brands to find out why you should be greasing up your man-mane, and these are the results. Philadelphia, for better or worse, is a city of beards. So much so that we, in fact, have our own “Philly beard,” based on the Sunnah beard, a traditional Muslim men’s facial hair style. From regular dude to sports star, and even right up to the guy in charge, Philly guys aren’t scared to let their chin whiskers out—and, at least here, facial hair ain’t just for hipsters anymore. Beards are in.

But, unfortunately, hobbled by decades of bro-ification and a general bent toward slovenly grooming, us guys don’t really know how to take care of our budding manes en masse. They appear sometimes scraggly, uneven, and generally out of control—the result being not unlike a little kid trying to wear his dad’s shoes around the house for the first time: Nice try, little tyke.

Lately, though, men have been turning to the cosmetic aisle (of the Internet, anyway) for a little help with their newfound ducktails, old Dutches, and chin curtains. Having a beard, after all, is like have another head of hair on your chin—and, as such, requires its own arsenal of care products. Unless, of course, beard-druff sounds like a good time.

If not, beard oil is the way to go. Now, don’t get grossed out yet—I’m not talking about slick, dripping beards and greased-up ‘staches. I’m talking softer, more manageable whiskers that hold their shape better and smell nice, besides. Doesn’t sound so bad put that way, does it?

Think of it as cologne, but one that doubles as a hair and skin moisturizer on top of adding shine and body to your beard. All it takes is 6 to 8 drops massaged into the face and hair once a day, and the result is fuller facial hair more worthy of comparison to the Romanov Dynasty than Duck Dynasty. Depending on scent, of course.

After about a month’s worth of treatments on my own beard, I’ve noticed my whiskers blossom into a full-blown mega-beard, miles ahead of what my normal routine produced before the addition of beard oil. No man (or girlfriend) should be denied the same experience.

So, here, for your bearded pleasure, are some of the best beard oils (and balms!) going, whether you’re growing a full natural or simple goatee. 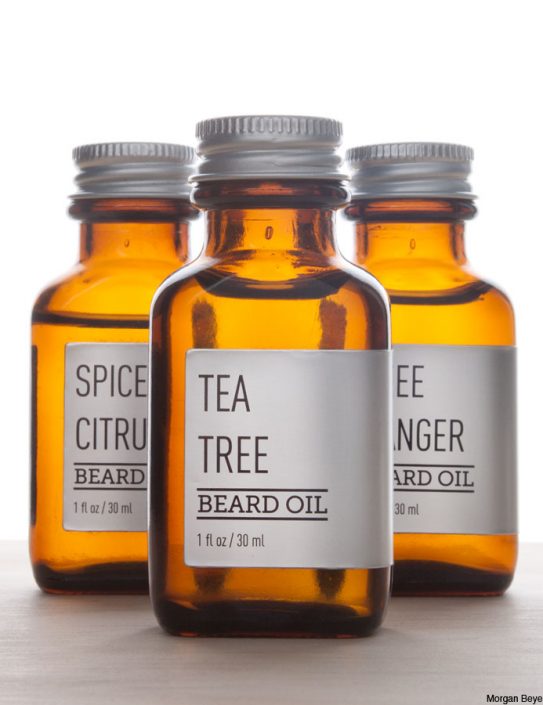 Eric Bandholz knows beards, and Beard Brand is the ultimate proof. His Washington-based company puts out blends of grapeseed, jojoba, almond, and castor oils with scents like Spiced Citrus and Tree Ranger. With the addition of vanilla and peppermint, though, their Tea Tree scent outdoes most others on the market. $25, Beard Brand. 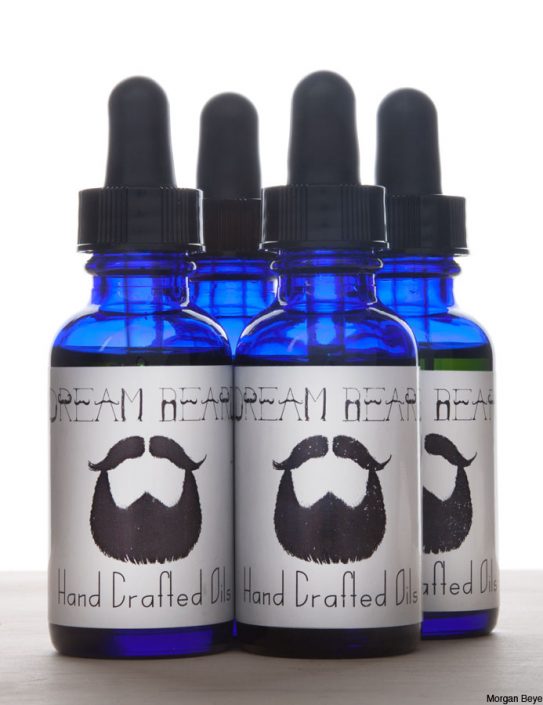 If you’re into mechanics and lumberjacks, Dream Beard is for you. With moisturizers like extra virgin olive oil, vitamin E, and jojoba, Dream Beard offers scents like The Mechanic, The Lumberjack and The Carpenter. Their Bearded Barber signature series scent, though, is king, due to its classic barbershop feel. $15, Dream Beard Oils. 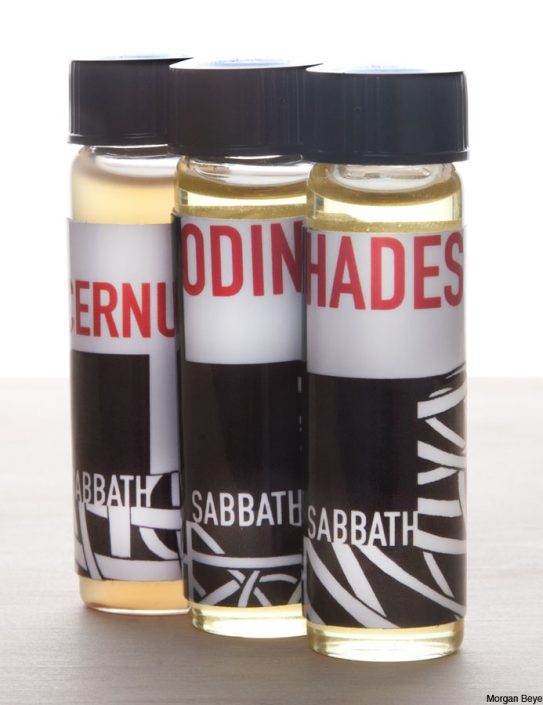 Virginia Giordano at Bath Sabbath loves metal, and it comes out in her bath products. Their beard oils, named after mighty Pagan gods, provide a little more hold than your average oil. My favorite? Hades, thanks to its notes of lime and pomegranate. Chicks love pomegranate. $10, Etsy. 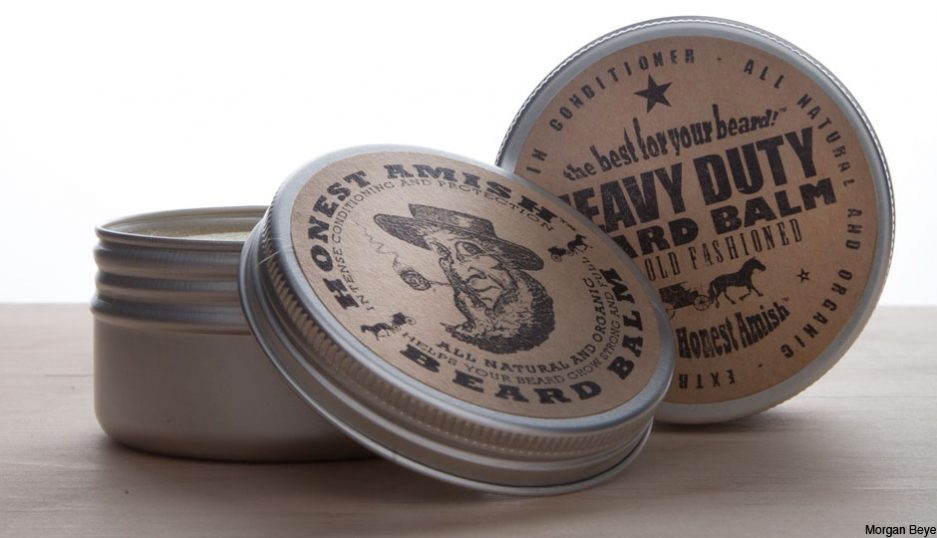 The only thing better than an oil is a balm, and Honest Amish has it down. Made in Transfer, PA, Honest Amish offers regular and “heavy duty” versions, each providing a greater degree of hold, shine, and moisturization than most oils due to the addition of butters like Shea, Aloe and Kokum. And it smells like black liquorice and lemon. $14.50 to $25.50, Etsy. 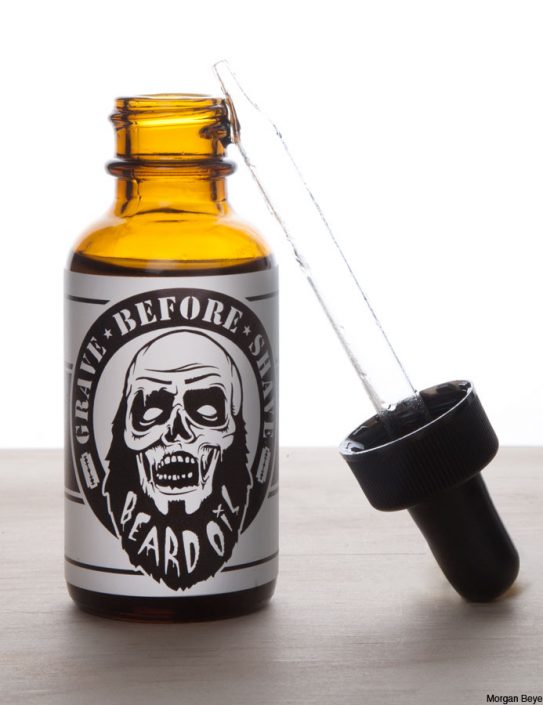 I love Lemonheads, so all the better if my beard can smell like them—I just wouldn’t expect that smell to come out of a bottle donning a bearded zombie. Wayne Bailey’s Grave Before Shave beard oil protects and strengthens your beard with a slew of conditioners, all on top of a great lemony scent. $12, Fisticuffs Mustache Wax. 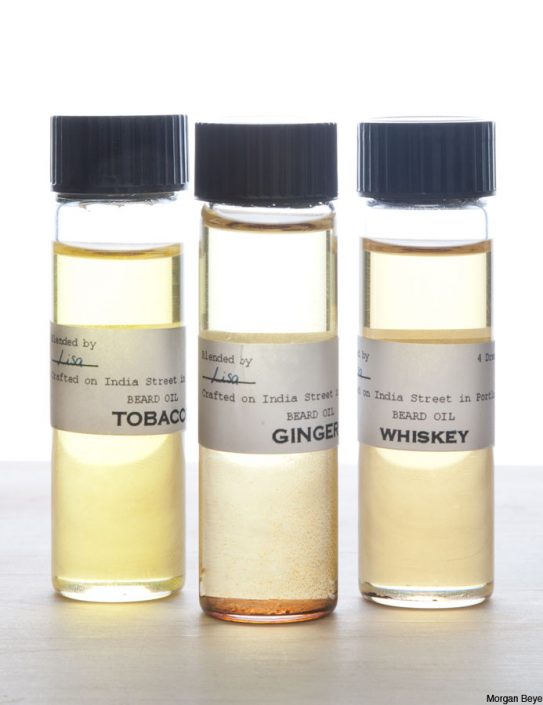 Ordinarily, having your beard smell like tobacco is something you’d want to avoid. Not so with Lisa Brodar and Troy Tyler’s Portland General Store, whose tobacco-scented beard oil—with its marula, hempseed, and jojoba oil blend—will have your whiskers baby soft and man-scented. $25 to $70, Portland General Store. 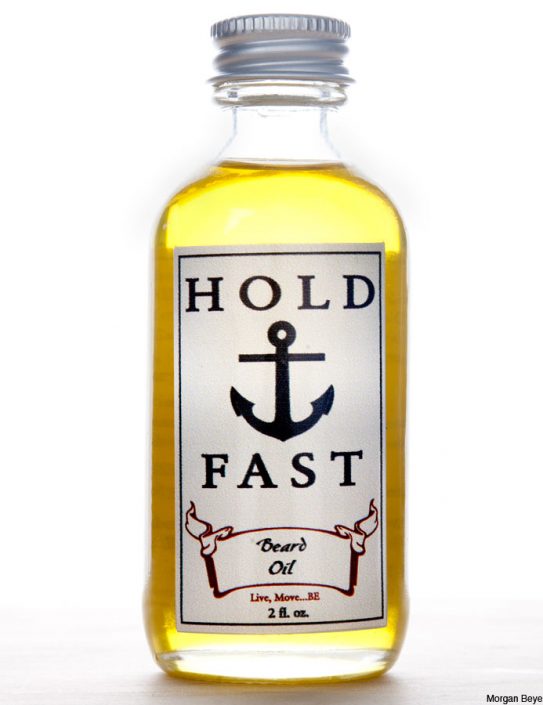 If a more neutral scent is your style, Jeremiah Johnston’s Hold Fast oil ought to do the trick. Produced under the Soapbox Gypsy brand, Hold Fast oil contains an arsenal of moisturizers, from Rosemary oil to tea tree, all adding up to a softer beard without an overpowering smell. $19, Etsy. 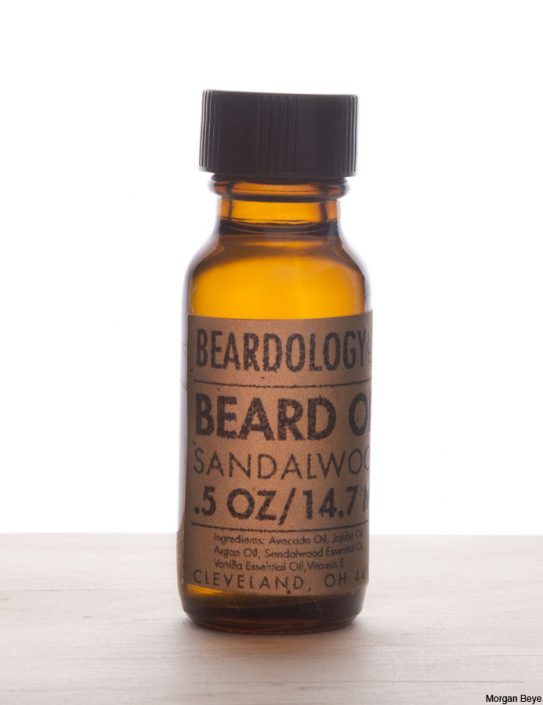 Lovingly produced by a couple out of Cleveland, OH, Beardology offers manly scents like fir needle and teak in an avocado, jojoba, and argan oil blend for stronger, less frizzy hair. The sandalwood scent, though, is my favorite, with subtle notes of vanilla under a strong sandalwood overtone. $8 to $20, Etsy. 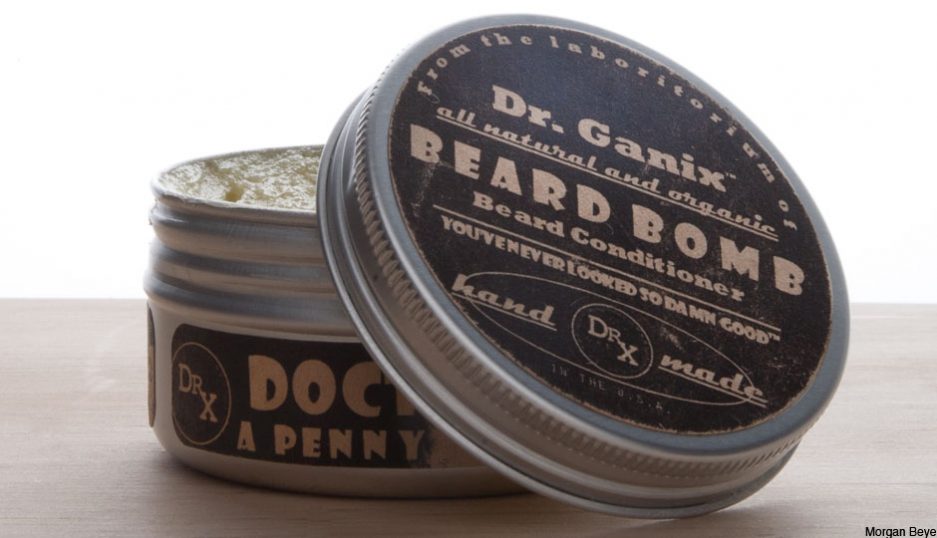 Based out of York, PA, Dr. Ganix’s beard balms are similar to Honest Amish, but with a more buttery base (thanks to the cocoa and pumpkin seed butters) and a heavier scent. Think alcoholic lemon meringue pie, and that’s pretty much what’s inside the tin—along with a softer beard, of course. $16 to $26, Etsy. 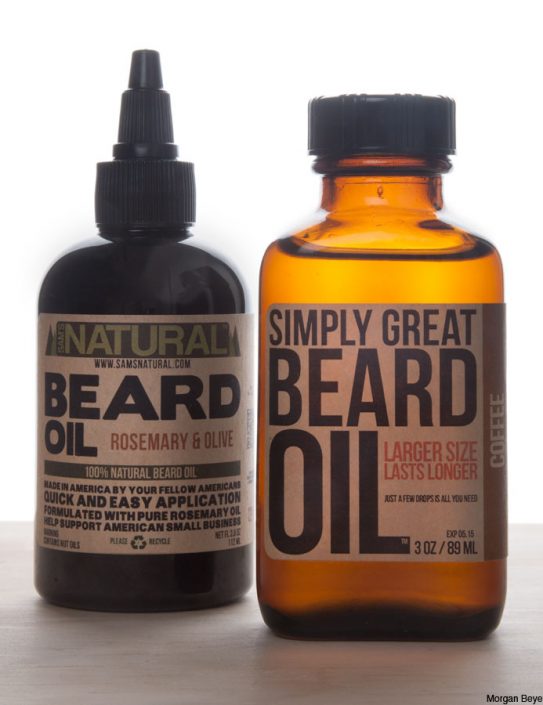 Hailing from Boston, Simply Great Beard Oil has all the masculine scents you want in an olive, almond, rosemary, and vitamin E oil base. Ranging from campfire, to leather, to bacon (yes, bacon), Simply Great’s scent selection never ends. I like the coffee scent, personally, mainly for the extra olfactory wakeup it provides in the morning. $20, Etsy. 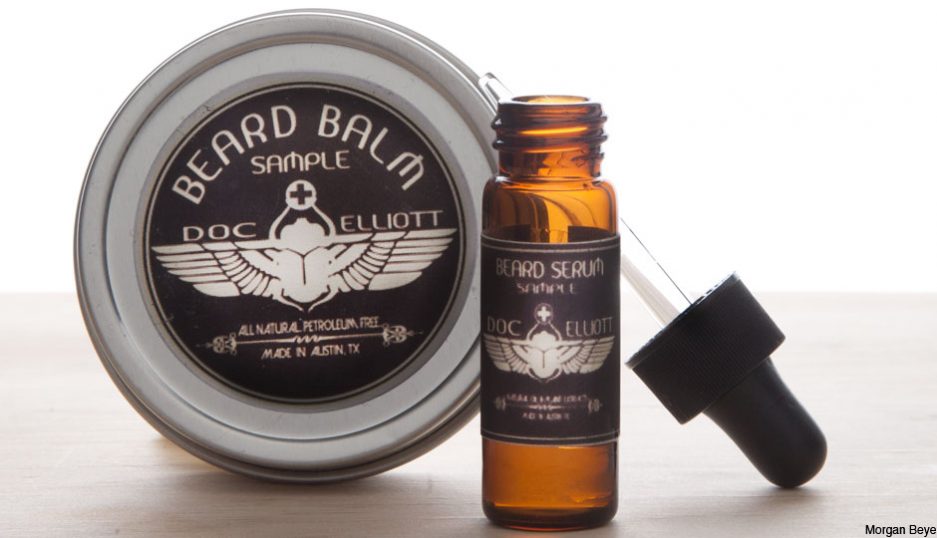 Austin, TX’s Doc Elliott Grooming mixes a beard balm and an oil, both built around a hemp seed, jojoba, grapeseed, and vitamin E oil base. Go with the “Refined” collection for a musky, barbicide scent that’ll have you smelling as sophisticated as your beard is burly. $16 to $20, Doc Elliott Shop.