The Top 5 Real Estate and Development Stories of 2022

The inflation fight begins to cool off an overheated housing market, apartment construction booms, and a major employer doubles down on Center City, to name some. 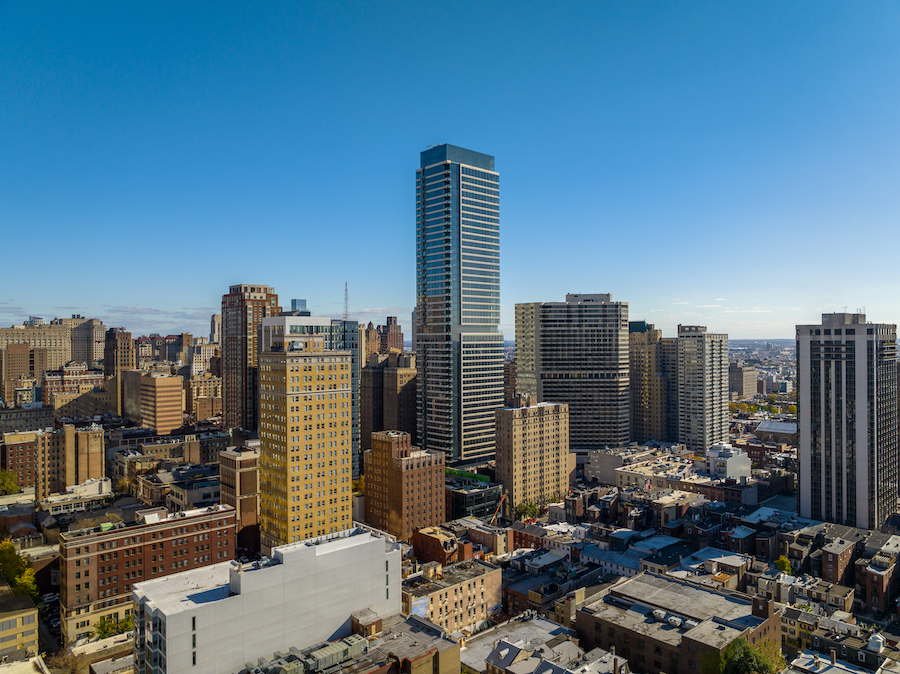 At just one foot short of 600 feet, The Laurel took the crown of tallest residential building in the city this year. / Photograph courtesy of Southern Land Company

Our democratic republic dodged another bullet in November, the Eagles posted a season for the record books, and Abbott Elementary took the critics, the country and the Emmys by storm in its first season. 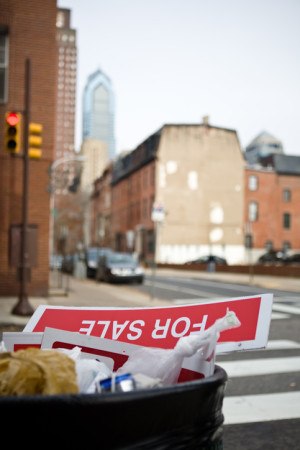 Home sales fell in 2022, especially in the second half of the year, but prices continued to rise / Photograph via Getty Images

1. An overheated housing market finally begins to cool off — just a little bit.
The COVID pandemic may have sent the economy into a funk, but it sent the housing market into overdrive as growing numbers of buyers bid on a shrinking supply of houses. Inventories and average days on market fell to lows not seen in many years, and many sellers received bids above asking on their houses.

This year — the first full year after most COVID restrictions were lifted — brought with it rising inflation and labor shortages across the country. And the Federal Reserve’s moves to drive inflation back down drove house sales down with them. Rising interest rates appear to have dampened the house-buying frenzy of the last two years, according to sales data from BHHS Fox & Roach Real Estate’s monthly reports.

Sales numbers region-wide fell from year-before figures every month this year, but the percentage drops rose significantly beginning in June, when figures started to run as high as 30 percent below 2021 figures. Also in June, months’ supply of inventory — the amount of time it would take to sell every house then listed for sale — began to rise from 2021 levels.

Average days on market also began to climb in July. But with inventories still on the low side (2.5 months) as of November, the last month for which data are available, and average days on market still under 30 at year’s end, it still remains a seller’s market, a fact reflected in median and average sale prices that continue to run above last year’s figures. 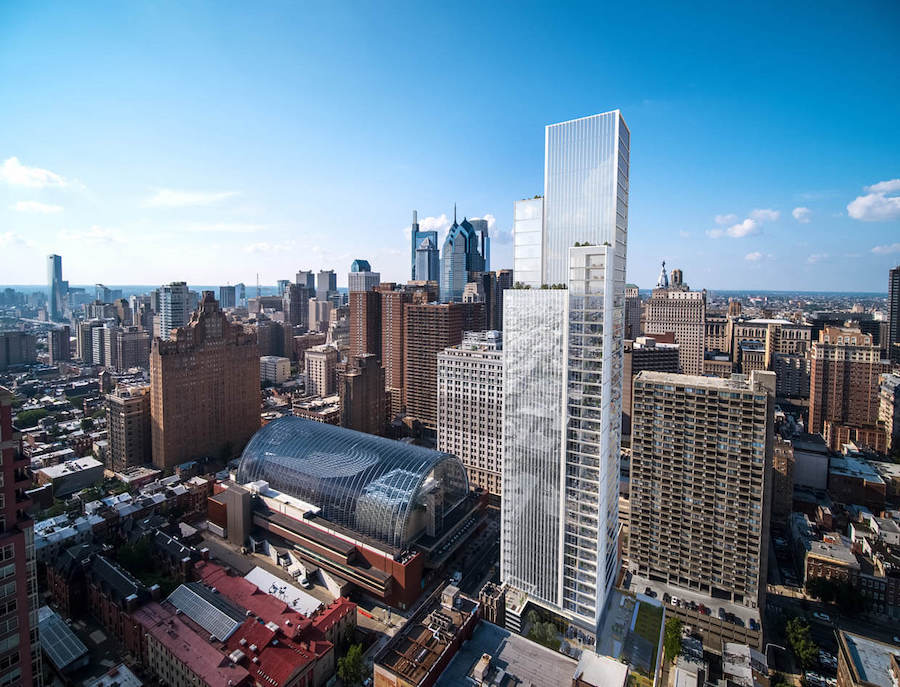 2. Two landmark residential towers finally open.
The city now has two new high-rise heavyweight champions with the opening of the Laurel/1909 Rittenhouse and the Arthaus, the tallest and second-tallest residential buildings in the city.

Southern Land Company’s 599-foot-high, 50-story Laurel fills the hole at Rittenhouse Square’s northwest corner created in 1994 by a fire that led to the demolition of three buildings, including a movie theater. The tower, designed by Solomon Coldwell Buenz, actually has two components: the Laurel condominium on its top floors and the 1909 Rittenhouse luxury apartment building on its lower ones. Tenants are already moving into the apartments, while finishing touches are being put on the condominium. It should welcome its first residents in the spring.

Dranoff Properties’ 528-foot-high, 47-story Arthaus condominium began life as a combination hotel and condo designed by Kohn Pedersen Fox. When the hotel partner dropped out of the project, Dranoff and the architect went back to the drawing board, made a few tweaks, and produced the slender all-residential tower that now rises above the Avenue of the Arts across from the Kimmel Center. Its first residents passed through its doors in June. 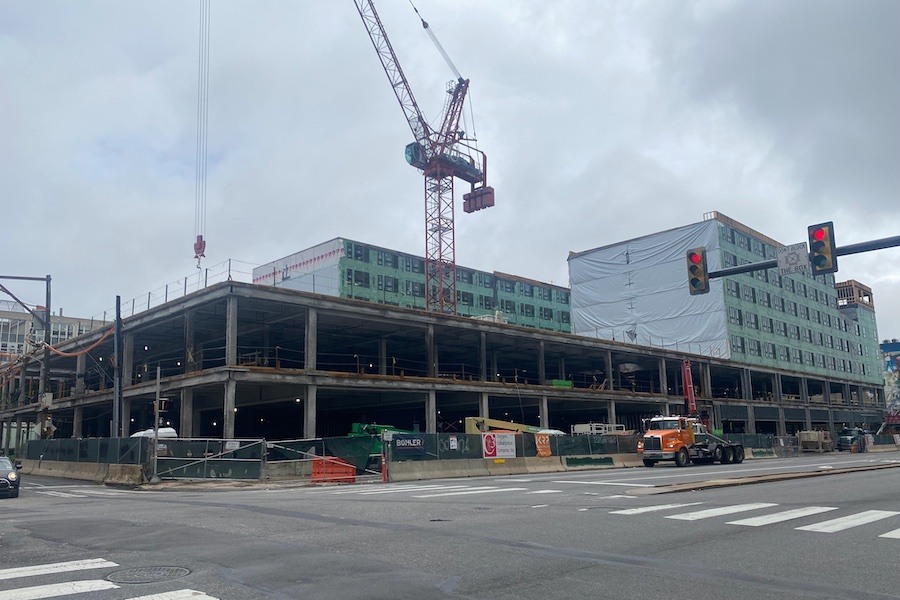 LVL North, which was being assembled when this photo was taken in February 2022, opened its doors to tenants four months later, adding 417 units to the city’s housing stock. It was just one of hundreds of apartment buildings for which permits were issued in 2021 in order to qualify for the full 10-year tax abatement. More such buildings should open their doors in the years ahead. / Photograph by Sandy Smith

3. Apartment construction booms as new building permits crater.
In case you haven’t noticed, it’s hard to find a part of the city where you won’t find someone building a multi-unit residential building these days. Even neighborhoods like Strawberry Mansion, long disfavored by developers, have seen new small apartment buildings sprout within them.

This, it turns out, is partly the result of the 50-percent cut in the 10-year property tax abatement that took effect at the beginning of 2022. Developers seeking to obtain permits for their projects before 2021 ended rushed to file them that year; according to data compiled by the U.S. Department of Housing and Urban Development, a total of 25,257 housing units got approved for construction in 2021, a fivefold increase over 2020’s figure. And a whopping 23,704 of those units were in multifamily buildings.

Even if many of those units never materialize, that’s a huge number of apartments (and probably some condos) slated to come on line in the near future. And with total permits as of October 2022 not even amounting to one-tenth of the 2021 total, it looks like these will also account for the majority of housing units completed in the city over the rest of this decade.

And as most of the new buildings being constructed contain units for rent, it could lead in the very near future to Philadelphia becoming something it has never been in its history to date: A majority-renter city. This would have significant implications for the city’s politics. 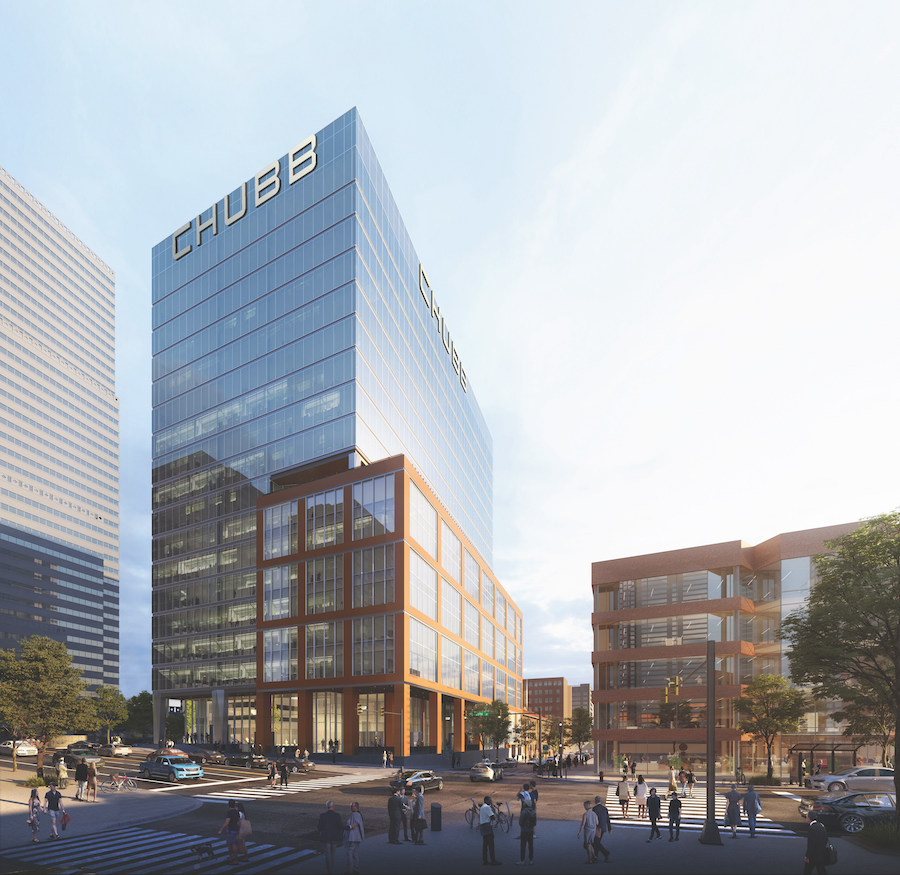 Chubb, headquartered in Zurich, has maintained an executive office in Center City Philadelphia (one of 10 worldwide) ever since the INA acquisition. And at the end of the year, the company announced that its Philadelphia office would get bigger. On December 16th, Chubb announced that in 2026, it will become the name tenant in a new 18-story office building that will rise on what is now a parking lot at 20th and Arch streets. Chubb is developing the 438,000-square-foot building jointly with Parkway Corporation.

Chubb will add another 1,250 employees to the 1,950 already employed at its executive offices in Society Hill when it takes up residence in the new building, which will also be the company’s largest North American office. 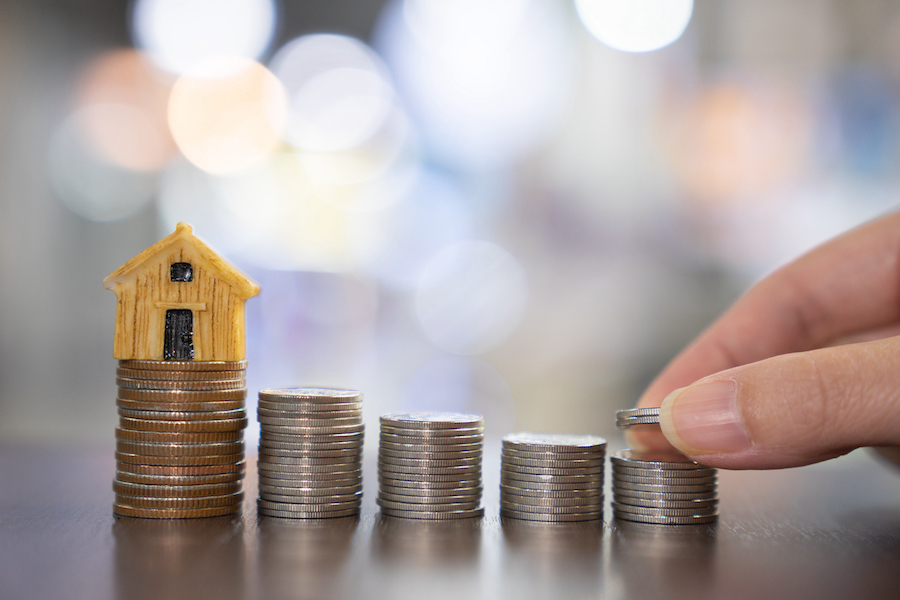 Many low- and moderate-income city residents still find it difficult to find housing they can afford. A bill introduced in City Council at the end of the year would reinstate a full 10-year property tax abatement for buildings in parts of the city that include affordable units. / Illustration via Getty Images

5. Housing affordability remains a top-of-mind issue in the city.
Even though Philadelphia remains the second most affordable big city in the Northeast after Baltimore, the ability of Philadelphians to afford housing has become an issue over the past few years, and it remains one this year.

Even though the National Association of Realtors’ Housing Affordability Index shows that, at the metro level, a family earning the area median income makes more than twice what it needs to afford a mortgage on the median-priced house, the sharp difference in median incomes between the city and its suburbs means that many lower-income Philadelphians don’t have enough income to afford a typical residential property, whether for sale or for rent.

City Council has attempted on at least three occasions over the past two years to enact what is known as “inclusionary zoning” laws. These laws mandate that developers of multi-unit residential properties make a set percentage of the units affordable to households making less than a certain percentage of the area median income (AMI) — usually 60 percent in Philadelphia’s case.

The Building Industry Association, which represents the smaller developers who produce the bulk of the city’s housing, opposes such laws, and their opposition sank a citywide inclusionary-zoning law proposed by Councilmember Maria Quiñones-Sánchez five years ago. Since then, she and Councilmember Jamie Gauthier have managed to get inclusionary-zoning ordinances passed that applied to specific parts of their districts.

In December, City Council President Darrell Clarke proposed a bill that would apply to a part of his district: specifically, the North Broad Street corridor, which has seen new apartment buildings rise along it at a fast clip. The bill he introduced, which replaces a similar one he proposed the month before, takes advantage of a new state law that allows municipalities to grant 10-year property tax abatements to builders of below-market-rate housing. His bill would offer these abatements to builders of multi-unit rental properties who made 30 percent of their units affordable to those making 60 percent of the area median income.

Along with the bill would come enabling legislation that would allow the abatements to be offered on the North Broad corridor and in part of Councilmember Cindy Bass’s Northwest Philadelphia district.

According to the Philadelphia Inquirer’s report on the bill, the BIA supports this bill, which it says differs from mandated inclusionary zoning laws. State Rep. Jared Solomon, the Northeast Philadelphia Democrat who sponsored the new state law, says he would like to see this incentive offered citywide but also supports what is in effect a demonstration project. Council should take up this bill when it gets back to work today (January 3rd).

There is, however, a certain irony in this bill: If it becomes law, the city will be bringing back a full 10-year tax abatement to a certain category of residential development after abandoning it across the board this past year.